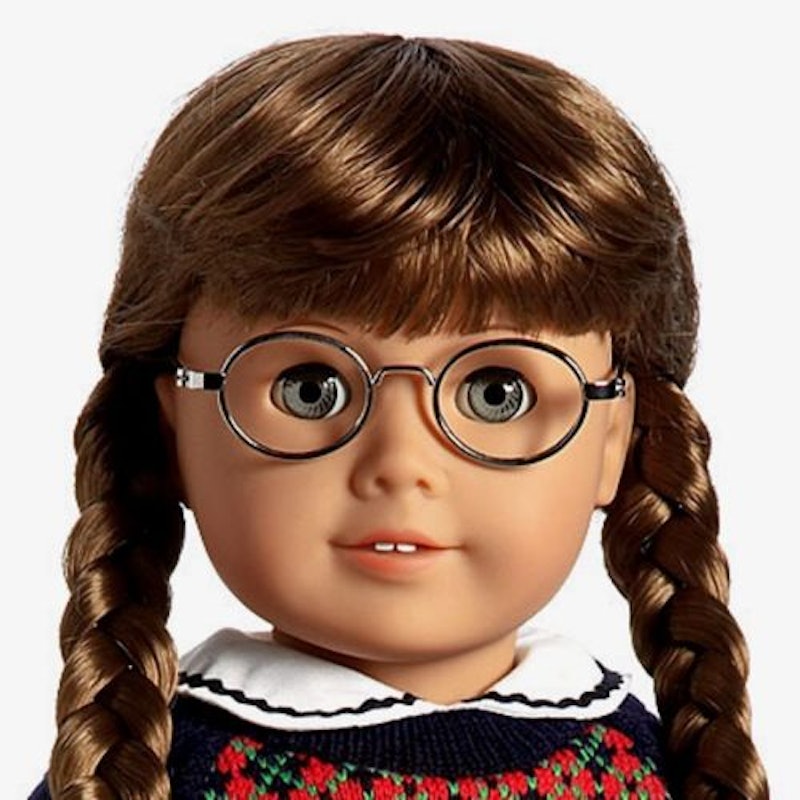 My parents gave my sister Anya and me American Girl dolls when I was 7. They were generous Hanukkah gifts, and we were ecstatic. Anya got Molly McIntire, and I got Addy Walker. They were beautiful, of course, and I loved their clothes and accessories — Addy‘s neighbor had a bird, so her doll came with the tiniest iron bird cage with a little yellow canary inside it. I still have it; it’s sitting on my bookshelf right now. For a long time I was convinced it was named Freedom, which is a great name for a bird (turns out it was named Sunny). I was never terribly invested in the dolls, though. They were too big and delicate to really play with, and I was really into TV and pogo-sticking. But I devoured all of their books. Except Kirsten, because ugh.

I started with Addy — or my father started with Addy, because he read them aloud to me every night before I could handle a whole book on my own — and her story moved me to tears. She was a slave during the Civil War, and the first scene in Meet Addy is of an overseer forcing her to eat a handful of worms. Her family is split up after her father and brother are sold off, and she and her mother escape to Philadelphia. There are things I know now because of Addy’s book series: what a cowrie shell and a seamstress are, and that the Confederate Army surrendered on April 9. It was my first encounter with racism, too, and though I didn’t entirely understand it, I knew it was wrong. I remember even staring at the book’s illustrations, thinking that maybe I would see something that would explain why a girl just like me would be treated so differently.

Addy’s time on the plantation terrified me, and her experience in Philadelphia confused me. She and her mom expect acceptance in the North, but they’re still met with racism and inequality. Even at 7, I sort of assumed things would be better for them north of the Mason-Dixon, and it was a bit of a shock to realize what little difference it made.

Dad and I moved on to Molly’s stories next. She was your average Midwestern WWII-era girl, with her dad overseas and her mom working at the Red Cross. I learned pretty much everything I know about that period from her books. What does that mean? Well, it means we need to talk about public education, but it also means that those books were incredibly well written. I became obsessed with Victory Gardens, war bonds, and rationing. I wanted to wear my hair in pin curls and host a British child refugee, too. I couldn’t believe the terrible misfortune I had of being born at the tail end of the Reagan administration. The only reason I know the basics of D-Day is because it was reenacted in Molly's summer camp's Color War, and I know without thinking that seven times eight is 56 (she had a multiplication quiz in Molly Learns a Lesson).

I got really into Felicity’s books soon after, and envied her long skirts, pluckiness and chores. Yes, chores. I was one of those girls who daydreamed about churning butter and wearing petticoats, and the responsibilities and restrictions of a Revolutionary War girl were amazing fodder for my imagination. In fact, Felicity’s life is probably why I happily signed up for Revolutionary War Day Camp when I was 9. (We made bonnets and did laundry with a washboard. It seriously ruled.) Samantha was next on my roster, and I was similarly enamored by her spunk, her social conscience, and her status as a rich-girl orphan.

The books connected me with history in a way that my school classes hadn’t. It sparked my lifelong fascination with the past by putting smart, gutsy girls right in the midst of monumental social changes. History suddenly felt less abstract and stiff. The best part about the books, though, is that the American Girls were completely normal. Even when they were escaping slavery or partaking in air raid drills, they were jealous of their friends, fought with their siblings, and dealt with bullies. Reading about these wonderfully average girls made history accessible and interesting. The problems they had — the general injustices of being a pre-tween — were problems I had, and the girls felt like my friends.

Addy and Molly are now tucked away in their beds in my parent’s attic, ignored and dusty. Their accessories are strewn about, and I think there are some towels stacked on them, which, for the record, is not how you should treat former slaves and children of war. Their books, though, are still standing neatly in bookcases, waiting for the next little girl in our family to fall in love with them.