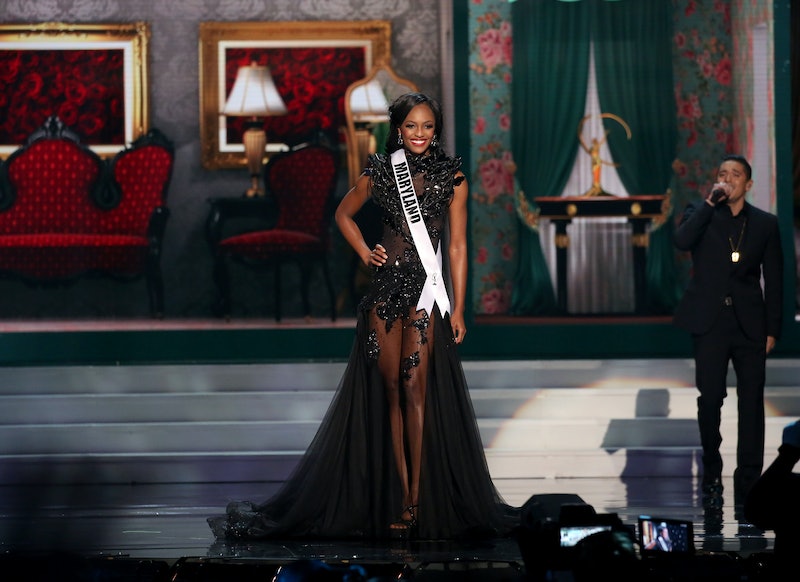 Cycle 22 of America's Next Top Model premieres on The CW on August 5, and fans are already sizing up the contestants. Their pre-season publicity shots are pretty revealing — the models all have to wear bathing suits with a black bar bearing their personalized hashtag covering up their nethers — but you can never tell from that who the winner will be, since those photos are taken before the all of the coaching they get on the show, and some of them get a lot better. Who is my money on? I think one of the models has a distinct advantage over the others: Mame Adjei, America's Next Top Model hopeful and former Miss USA contestant.

Yes, Adjei won the Miss Maryland crown, and went on to compete in Miss USA. She made it into the top five at the big show, and ultimately walked away in the fourth runner-up spot, which is nothing to sneeze at. And, even though she didn't get the big tiara, competing in such a high-profile pageant must give her some skills that she can transfer over into America's Next Top Model. In fact, each of her experiences in the Miss USA competition could potentially her a little boost.

I don't know which sage said it — it might have been Tyra Banks herself, or someone else — but I've heard it said that 90 percent of acting or modeling is just pretending that you're not cold. Standing up on stage in what I'm sure was a freezing auditorium (since you don't want to sweat) in a skimpy bikini gives Adjei a very exposed leg up.

Okay, this comes the closest to straight-up runway modeling. For Miss USA, Adjei picked a very editorial, almost avant-garde black gown. And, she totally pulled it off, so some of the stranger Top Model fashions shouldn't really phase her. (If she could actually pop her hip at that unnatural angle like that sketch, she'd be golden.)

Speaking on camera is usually the Top Model contestants' downfall. The fact that Adjei can speak coherently puts her ahead of the pack (her final question starts around the six-minute mark in the video above) — and the fact that she can do it on the fly gives her an extreme advantage.

Trick question! Miss USA isn't the pageant with the talent portion (that's Miss America). That's OK — it's not clear how singing, playing the flute, or doing magic tricks would help in a modeling competition anyway.

A lot of times, when the Top Model contestants wash out, it's not because of their skills as models. Some of them just can't deal with the competition itself, and exhaustion and stress get the better of them. Adjei may not have won Miss USA, but she did win Miss Maryland — and she survived to the end of Miss USA. If she can outlast in that kind of high-stress environment, America's Next Top Model will be a cakewalk.