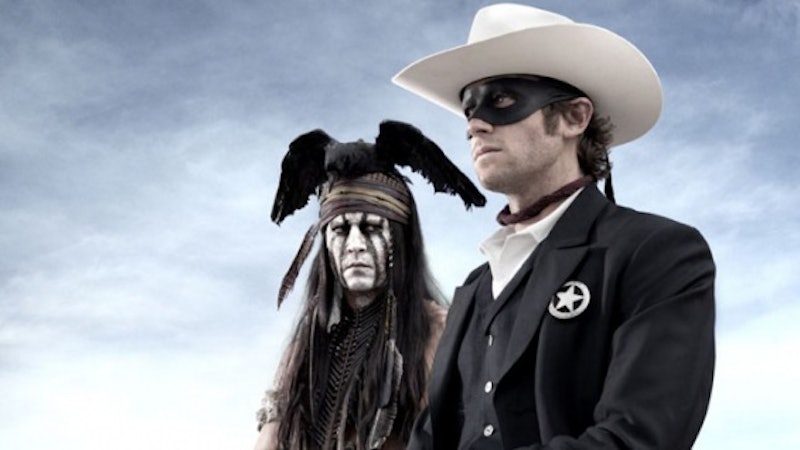 When I first saw a preview for Disney's upcoming movie The Lone Ranger, my first thought was "Oh, shit." I mean, Johnny Depp in red face speaking broken pidgin English? Not quite the best sign.

When Jerry Bruckheimer first released a photo of Johnny Depp in his Tonto costume a year ago (talk about hype!), it was revealed that Depp's outfitting was based on this painting by Kirby Sattler (a white guy) called "I Am Crow." The artist notes on his website that he tries to paint "without the constraints of having to adhere to historical accuracy."

This is stunning white privilege. The character of Tonto reeks of the conflation of Native American peoples that is unfortunately typical of white culture. Tonto is supposed to be full-blooded Comanche, yet his appearance is based on a white dude's loose interpretation of what a Native American chief would look like. Why bother making distinctions and paying respect to the history and culture of a people that are all but ignored by white history? Why Bruckheimer has to be so upfront about aligning with a figure that doesn't do his research is beyond me — maybe because he knows he'll make millions on opening day anyway.

And then.... there's Depp, who, when asked about the role, mused, "I guess I have some Native American somewhere down the line. My great-grandmother was quite a bit of Native American, she grew up Cherokee or maybe Creek Indian." It's a bit disappointing to watch the actor try to identify with a people and not even knowing the distinction between tribes.

Defenders of Depp's portrayal of Tonto cling to the fact that Tonto is a fictional character. But fictional or not, the implications are so real, especially when there are so few portraits of Native Americans in mainstream culture that don't stray from the stereotypes of barbaric warrior, white man's sidekick, or alcoholic. In a discussion last year on the blog Native Appropriations, they pinpointed exactly the problem with Tonto:

"How can we expect mainstream support for sovereignty, self-determination, Nation Building, tribally-controlled education, health care, and jobs when the 90 percent of Americans only view Native people as one-dimensional stereotypes, situated in the historic past, or even worse, situated in their imaginations? I argue that we can’t — and that, to me, is why Tonto matters."

Not looking forward to the Tonto Halloween costumes this year.

More like this
25 Quotes About Love To Share During Pride Month 2022
By Madeleine Aggeler and Emma Garza
'Heartstopper’s Kit Connor Revealed Why He Doesn't Label His Sexuality
By Nola Ojomu
'Gentleman Jack’s Cast & Crew Are Keen On Season 3, Too
By Frances Stewart
'Derry Girls’ Dylan Llewellyn Will Star In C4’s New Queer Comedy
By Rachel Mantock
Get Even More From Bustle — Sign Up For The Newsletter