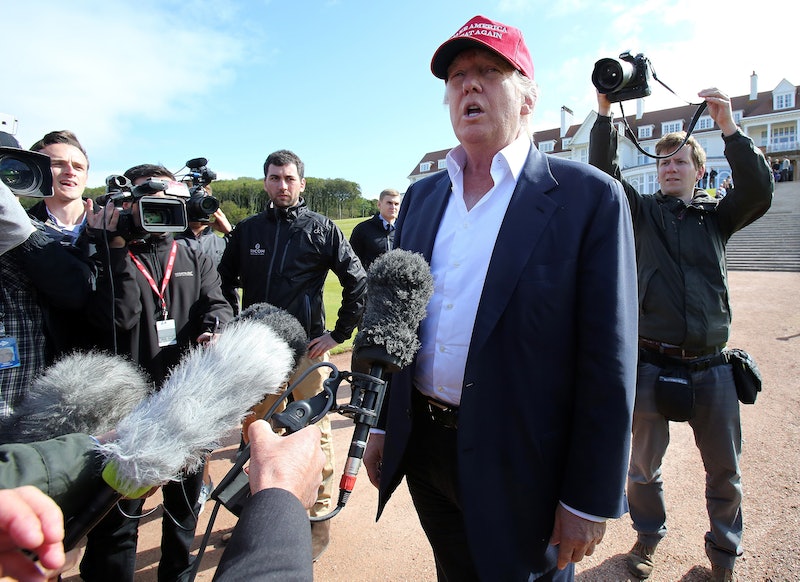 Fox News is rounding up its final candidates for its upcoming 2016 presidential debate, and if you thought Donald "Insert Offensive Comment Here" Trump would never make the cut of serious contenders, think again. Donald Trump is still the GOP presidential candidate leader, and is poised to make his TV debut as a politician Thursday evening. Recent polling also reveals that the Trump effect has hardly slowed down over the last month — in fact, Trump's popularity may be heating up.

According to a national CBS News poll released Tuesday morning, Trump is the leader of the crowded GOP field, with 24 percent of Republican primary voters favoring the business mogul. It's a mighty comfortable lead: Jeb Bush and Wisconsin Gov. Scott Walker round out the top three, with 13 percent and 10 percent, respectively.

But how is Trump, the man who's made derogatory remarks about everyone from Mexican immigrants to Sen. John McCain, still in the lead? Well, it turns out the world we live in connects with the hotel-chain billionaire. The CBC News poll shows that Trump's straight talking has attracted the most Republican primary voters who are angry with current Washington politics. Nearly 80 percent of Republican primary voters also agreed that they believe Trump means every little word he says — an honest yet scary thought.

The CBS News poll isn't the only one this week highlighting the wild Trump surge. A Fox News poll released Tuesday morning also shows Trump with a comfortable lead, garnering 26 percent of Republican primary voters compared to Bush's 15 percent and Walker's 7 percent. It's a record for Trump, who was polling at 18 percent in mid-July, according to Fox News. An NBC News/Wall Street Journal poll released Sunday also gives Trump a steady lead over his contenders, with 19 percent of voters favoring the outspoken candidate.

As for Trump's overall polling average, Real Clear Politics data shows he has a comfortable lead. Trump's current polling average is 23.2 percent, with an average spread of 10.4 percent. No one comes close to Trump at this point in the game, though it's tough when your candidate field is overflowing with 16 people.

The more Trump speaks, the more voters he seems to attract. But perhaps this shouldn't be so surprising for us. Trump is appealing to a fiery constituency that's more than ready to tear down Washington, D.C. and building a miles-long citadel between the United States and Mexico. They want an "outsider," someone who doesn't know politics, and who can better fulfill that wish, in this GOP field, than Trump?