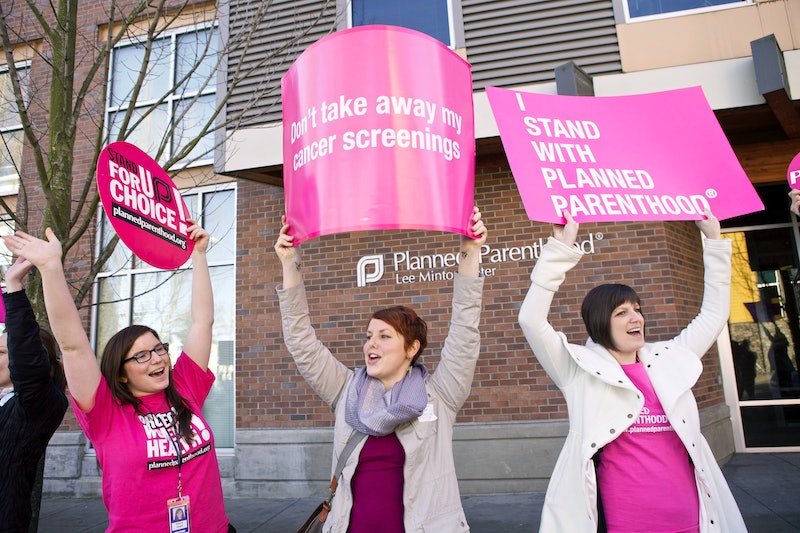 The fight to strip Planned Parenthood of all its federal funding failed Monday in a 53-46 vote, but that was only seven short of the 60 needed to keep the measure moving toward being passed, according to the Associated Press. The push will continue when Congress returns from its recess next month to consider legislation that keeps certain government agencies open after their budgets expire in October. Why does it matter how much funding Planned Parenthood gets? Mostly because of the recent "sting" videos by anti-abortion groups that claim to prove that Planned Parenthood illegally sells fetal tissue (a claim the organization has denied since the beginning). Further, GOP members and their conservative, anti-abortion supporters don't want people spending tax dollars on abortion. So, just where does Planned Parenthood get its funding and then what does it use those funds for?

Planned Parenthood's 2013-2014 annual report shows that it received about $528 million in "Government Health Services Grants & Reimbursements" — about 41 percent of its total funding. It also received about $305 million from non-government health services revenue — 23 percent of its funding — and $257 million in private contributions and bequests, according to the report. About 65 percent of that funding went to providing medical services, while the remaining funds went to non-medical program services, management and general support, and fundraising.

Breaking down the federal funding that the organization receives even further shows that, in 2009, about $293 million came from Medicaid funding, which includes both federal and state money, and about $70 million comes from the Title X Family Planning Program, according to FactCheck.org.

So, here comes the big kicker question: Just how much of that money went toward providing abortion services? None. By law, federal funds cannot be used for abortions except in cases of incest, rape, or when a woman's life is in danger. Further, abortion only makes up 3 percent of Planned Parenthood's services, according to FactCheck.org. That means that federal funding could be used for the remainder of its services; the most popular services include testing and treatment for sexually transmitted diseases and infections (35 percent), contraception services (35 percent), cancer screening and prevention (16 percent), and other women's health services, which could include prenatal care (10 percent), according to FactCheck.org.

What does all of this mean? That defunding Planned Parenthood wouldn't stop abortions, because abortions are either being paid for out of pocket, or with the help of private funding or non-government funding. Defunding Planned Parenthood would simply make it more difficult for the organization to provide its 2.7 million annual clients STD and STI tests, contraception services, cancer screening, or prenatal care. Further, it would mostly hurt low-income women, who might go to Planned Parenthood because its open on weekends or because its cheaper than hospitals and doesn't require the long wait times often associated with community health centers.