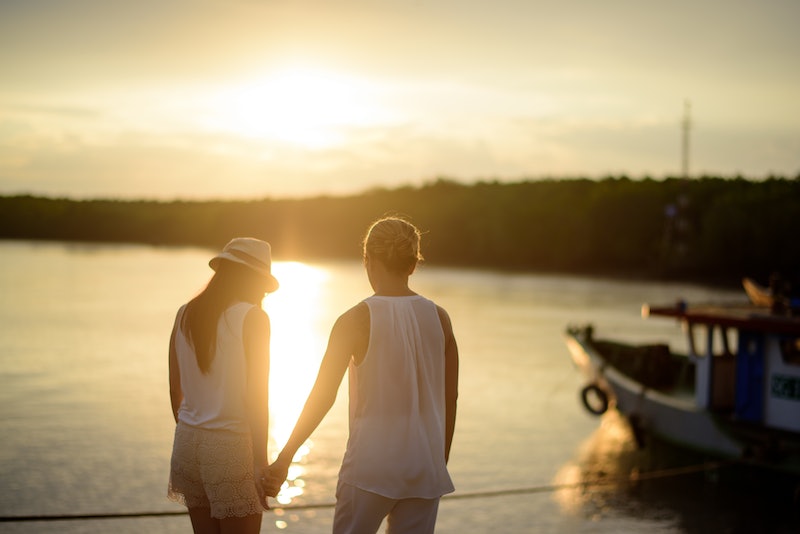 After a relationship ends, especially if it's a messy breakup, there are inevitably things that you're dying to say to your ex. Whether it's telling them how much you miss them, or rehashing the problems in your relationship for the zillionth time, you've gotta commit yourself to keeping your mouth shut. Yes, it's frustrating as hell, and takes willpower of heroic proportions, but there are certain things that you should never say to an ex.

According to Dr. Megan Flemming, a sex and relationships expert based in New York City, our desire to reach out to an ex can be for any number of reasons. Is it for connection? Is it to blow them off? Is it to make the person feel bad? No matter what our reasoning, it's important to be clear with ourselves (and our exes) about what the intentions are. To help you both move on, it's best to bite your tongue in most cases.

The real moral here? No matter what you feel like you want to tell your ex, unless it is for sure going to be productive in aiding one or both of you in the moving on process (which it almost never is), chances are its better left unsaid. Below, seven things you should definitely never, ever say.

If You're The Dumper"

When you decide to breakup with someone, you shouldn't expect to have them in your life in any capacity. Keeping in touch after a relationship ends, and especially trying to be friends, is just too hard. "If someone is in love with you, and you say that, it's a slap in the face," best-selling author and relationship expert Susan Winter tells Bustle. "Because they don't have you in the friends basket... It can't happen. You can't go from a breakup to just hanging out. It's just cruel to the other person."

Whenever you reach out to an ex, "it's important to be very clear about your intentions," says Dr. Flemming, "Whenever you're communicating something, [consider] the outcome or result that you would like to experience." If you've broken up with someone, and don't have any intention of getting back together, it's unfair to reach out to them to express how much you miss them, as it will inevitably give them the wrong idea.

During and after a breakup, especially with someone you care about, it's important to preserve that person's sense of desirability and worth. To do so, you need to provide actual, tangible reasoning and evidence as to why you want the relationship to end. "The dumpee needs to have their integrity and their ego preserved. So what they want to hear is 'it's not you, it's me,' and they need to hear a reason it won't work," says Winter. Give your reasoning during the breakup conversation, and stick with it during the aftermath. Being wishy-washy is unhelpful to your ex's healing process and can give them the wrong idea about where things stand between the two of you.

If You're The One Who Got Dumped:

"This is such a cheap shot," says Winter. "Tearing [an ex] down really never makes us feel good." I actually said this to an ex of mine via text message, about a month after we broke up, and immediately regretted it. Yes, I wasn't thrilled about a lot of the things he did during our relationship, but telling him so in a moment of rage after the relationship was over (and had been been for a while) wasn't productive for anyone involved. As much as I'd hoped it would, it didn't make me feel better. At all.

2. "My New Partner Is So Much Hotter/Funnier/Smarter/Better Than You Are"

When you've finally moved on and found someone new, it's tempting to want to rub it in the face of the person who broke your heart. However, "minimizing the relationship in this way is just in poor taste," says Winter. Comparative statements like these are unnecessarily hurtful, and diminish the relationship the two of you shared. Plus, it makes you look like you care way, way too much about winning the breakup. If you actually have found someone better than your ex, you've already won. Put a cute happy-couple picture on Instagram and call yourself the victor.

Or anything else that puts down his or her sexual ability. "The thing to never do is character assassination," says Dr. Flemming. Unless it's going to help your ex in his or her next relationship (which, honestly, is that even something you want to do?) it's better left unsaid.

And No Matter How It Ended...

No matter what side of the breakup you're on, texting (or calling, or asking in person) an ex for a hookup is a horrible idea. Yes, it happens (#guilty), but its a very, very dangerous thing to do, especially if one of the involved parties is still in love. Says Winter, "If he or she dumped you, you look pathetic, If you dumped them, you look crazy. It's a no win, no matter what."

More like this
20 Things You Should Never Tolerate In A Relationship
By Rachel Sanoff and Kathleen Ferraro
The Best Time To Date After A Breakup, According To Experts
By Bustle Editors
The Top Mistakes Scorpios Make In Relationships (& How To Avoid Them)
By Nina Kahn
12 Ways You're Sabotaging Your Love Life
By Teresa Newsome and Lexi Inks
Get Even More From Bustle — Sign Up For The Newsletter