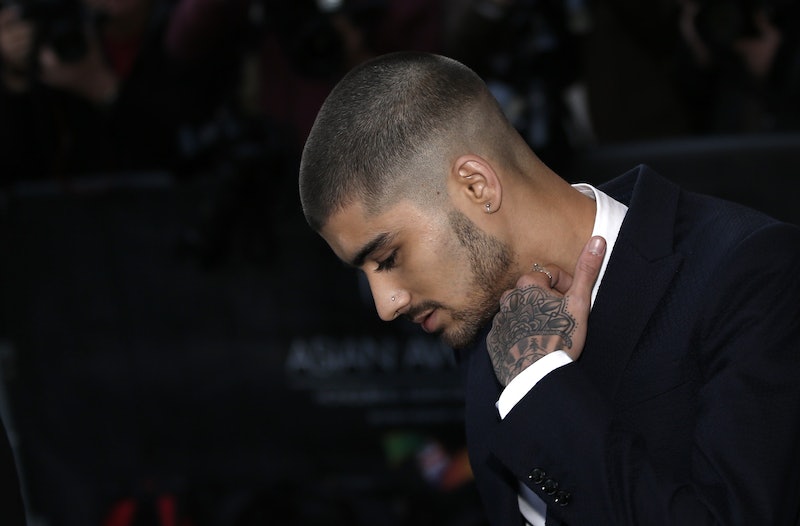 Color me very surprised, but this year is proving to be a very trying one on the die-hard One Direction fans. First Zayn Malik leaves the band, next Louis Tomlinson finally confirms that he will be a father and now, Us Weekly confirms with his personal rep that Zayn Malik and Perrie Edwards have ended their engagement. WUT. OK, so I am a casual One Direction fan and keep tabs on them every now and then, but I definitely thought that Malik and Edwards would stay together and remain a golden pop couple, despite all their ups and down. Didn't he leave One Direction to be closer to his love? Well, People is exclusively reporting that Malik was the one to call it off and a source says,

Perrie's being supported by her bandmates, but she's really in pieces about this...She's been putting on a brave face as Little Mix have had promotion to do, but she's obviously devastated.

Earlier this week, 1D fans quickly noticed that Edwards was not wearing her engagement ring in a photo on bandmates Jesy Nelson's Instagram. The snap shows the girls sunbathing in L.A., where Malik currently is, but Us notes that the two have not seen each other while in the city. Uh oh. It really sounds like trouble is in paradise, so why did Malik and Edwards break up this time?

They Are Apart Too Much

Now that Little Mix is prepping for a world tour in 2016, chances are that Perrie and the girls will be locked away in dance rehearsals for many, many nights.

Their Careers Are About To Get Even Busier

Malik is in L.A. celebrating his solo record deal with RCA Records and the Little Mix girls just released their newest hit, Black Magic, in anticipation of their Get Weird 2016 tour. This only means that Malik will be cooped up in a recording studio for the next few months and Edwards will be preparing to perform their newest material and world tour. Time for a relationship is very few and far between.

The Rumors Got The Best Of Them

Earlier this year, Malik got caught in a scandal when he was pictured with a Swedish model while partying in Thailand. Rumors spread that he slept with the girl and Zerrie fans were devastated. Although we don't know the truth, the two remained by each other's side but the persistent rumors of cheating could be enough to drive a woman away. Especially when you're not together 24/7.

They Are Still So Young

When you reaaally think about it, they are both 22 years old, and while I think you can definitely have a mature relationship at that age, it is very rare in their business. Perhaps while they're off touring and recording they can take a break and figure out what they really want. It's tough out there in those flashing lights.

They Each Want A Fresh Start

According to Us, a source says that, "He just wanted to move on and start over in all ways." This might be a shock to Edwards right now, but I think they've each got amazing things going for them in the next year and they will only grow and learn from here on out.

More like this
Harry Styles Helped A Fan Come Out As Gay In Dramatic Fashion At His London Show
By Jake Viswanath
Perrie Edwards & Alex Oxlade-Chamberlain Have The Sweetest Engagement Pictures
By Lara Williams and Frances Stewart
Who Is Betty Who Dating? The Australian Singer Is Married To Her Tour Photographer
By Radhika Menon
Drake’s Surprise Performance With The Backstreet Boys Was Fans’ Fire
By Stephanie Topacio Long
Get Even More From Bustle — Sign Up For The Newsletter