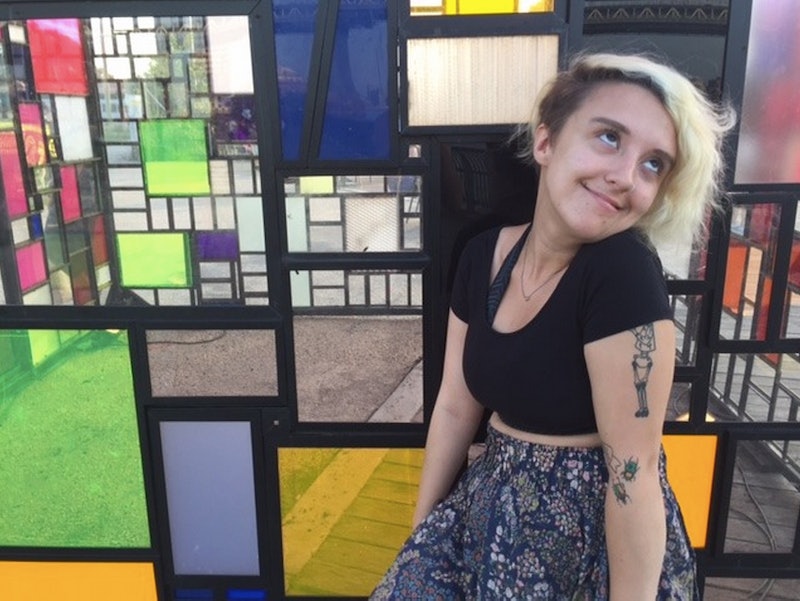 Body positivity has arguably been taking over the Twitter-verse as of late and July's #ThighReading hashtag continues to add to the conversation. Started by Twitter user @princesslabia, the hashtag is meant to be an empowering tool for feminine people to share photos of their stretch marks as an act of self love and body positivity. In a world of airbrushed models and media that sends us negative messages about our bodies' "flaws" pretty regularly, it's important to bring images of skin with stretch marks into the mainstream to unveil the stigma surrounding it. As both a body positivity advocate and someone who has struggled with loving the marks on their thighs and hips, the tag has been exciting me for a month. I have been putting a lot of energy into embracing the parts of my body I once perceived as flawed, but one thing I didn't realize I was still hiding and ignoring was my beautiful stretch marks.

Between the ages of 10 and 12, I started noticing lesion-like marks appearing around my thighs and hips. When I realized that they were stretch marks — something I had only associated with the weight pregnancy weight gain up until this point, I was mortified. I scrambled for ways to get rid of my stretch marks, including using cocoa butter and scar removal creams, but nothing worked. Since this was before I had learned anything about body positivity, I feared that I was "getting fat" and felt pretty depressed about it. Looking around at the rest of my friends, specifically in the gym locker room, I noticed that not many others shared the same marks I did. So I did the best that I could to keep them hidden.

Little did I know, developing stretch marks during puberty is perfectly normal (and so is gaining weight!). At a time when you're constantly growing and feminine bodies are developing hips, thighs, and breasts, your skin often has a hard time accommodating all the stretching taking place. Of course all this movement and change will leave your body with some marks. Additionally, I had started going through puberty much earlier than the rest of my friends, which explains why I wasn't seeing more girls in the middle school locker room with stretchies to match mine.

Stretch marks come in many colors, including pink, purple, and red, and can appear as indented lines or as bright streaks fading into white or light pink. They can occur during puberty, pregnancy, and pretty much any period of time that is characterized by a change in weight. They are perfectly harmless, except in very particular and very rare cases. According to Johns Hopkins Medicine, stretch marks can sometimes be a symptom of overactive adrenal glands or Cushing's Syndrome. Otherwise, the stigma attached to having stretch marks seems to stem entirely from cosmetic reasons alone, and the negative way in which we are taught to view weight changes (specifically weight gain).

This was definitely true for me. I hated my stretch marks for the majority of my life because I worried they meant I was "out of shape." Once my viewpoint about body image and weight began to change, and the issues of fatphobia and body shaming became clear to me, hating my stretch marks began to make less sense to me. In the years that I've spent carefully trying to cultivate body positivity within myself, I grew to love my breasts, my thighs, my belly, and my nose — parts of me that I formerly hated. I began paying more attention to loving my skin in all of its acne prone and eczema susceptible glory. But I never gave a second thought to the skin around my thighs and hips.

Years later, I still had my stretch marks from puberty, and I was still almost unconsciously continuing the ritual of ignoring them and covering them up from the world. However, #ThighReading reminded me that there was yet another part of my body that deserved to see the sun and to be deemed beautiful by the only person who mattered (ahem, me). So I took some pictures.

You can see some chafe marks here too, towards the bottom right.

After dedicating time to taking pictures of my stretch marks, I already felt a bit more at peace with myself. Initially, it felt pretty weird to lower my boxers to reveal my stretch marks for a photo. I felt a little insecure in doing it, especially since it's always been so natural for me to hide them at whatever cost. As soon as I saw the images, though, I felt differently.

It may have been because my loving partner took the photos, or perhaps because I had specifically set aside time to for a body positive action, but looking at the photos made me proud. The magic of body positivity through visibility in an iPhone camera is really quite remarkable, and worked on yet another part of my body.

I'm not saying that I'm cured from being uncomfortable with my stretch marks. I've come around a lot since middle school, and definitely don't actively hate them anymore. I am no longer interested in pursuing ways to get rid of them. But I'm still pretty uncomfortable with showing them, and get self conscious if one of them is exposed or catch someone staring at the marks on my hips or thighs. This photo shoot was definitely a step in the right direction towards feeling truly positive about my stretch marks, though. The images themselves and the way I feel about them act as proof that my stretch marks are beautiful and do deserve to be seen, like the rest of me.

For anyone who doesn't feel super great about their own stretch marks, know that they are beautiful. Participate in #ThighReading and snap some photos of those sweet lines. Because trust me, you'll feel a million times better after. Your stretch marks deserve to be seen.