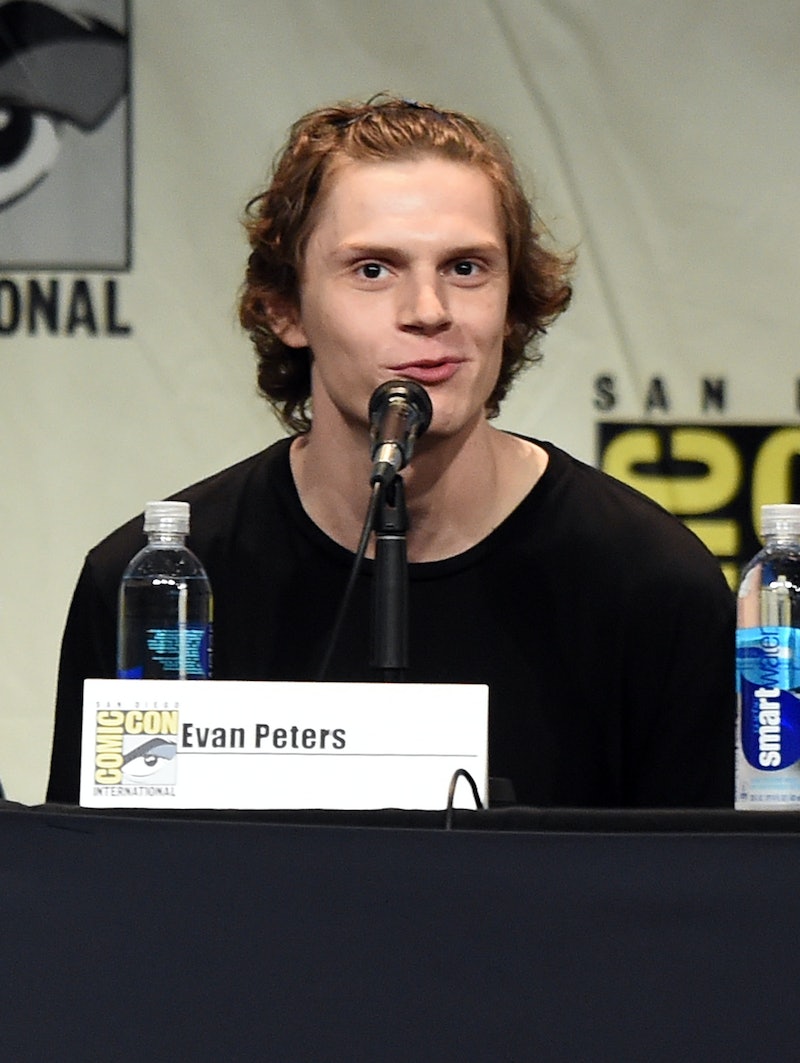 As devastated as I was (and admittedly still am) about Jessica Lange's AHS departure, that doesn't mean I'm not excited to be checking into whatever horrors Ryan Murphy & Co. have in store for this upcoming season. In fact, the more details I learn about American Horror Story: Hotel , the more curious I become. Not only will we be introduced to newcomers such as New Girl's Max Greenfield and, of course, Lady Gaga herself, but we'll also see the return of many fan favorites. (I'm looking at you, Lily Rabe!) And while details on many of the roles still remain a bit of a mystery, one character in particular that I'm eager to learn more about is Mr. March, who will be played by Evan Peters.

As a long-time vet of the horror anthology, Peters has played everything from a Frankenstein-esque frat boy corpse to a freak show performer who's really good with his hands (or, rather, claws). So what kind of role will Season 5 add to this actor's already impressive and highly extensive resume? Well, naturally, the cast is playing coy in regards to any specifics, however, I have a sneaking suspicion that Evan Peters' new gig will bring about a ghostly callback to Season 1 for many viewers.

What do I mean by that, exactly? Well, as those of you who visited Murder House undoubtedly remember (spoiler alert for those who haven't), Peters portrayed the role of Tate Langdon — a teenage sociopath who murdered a bunch of his classmates before taking his own life. (Not a great guy, in other words.) And since he died within the grounds of Murder House, he became one of the many ghosts to reside within its hallowed halls — a concept which I'm very tempted to believe Murphy is gearing up to imitate. Except instead of a haunting a house, Peters will haunt the hotel.

Granted, neither Murphy nor Peters have gone on to confirm such a theory, but given the way Murphy first described the character on Twitter, it sounds as though this mysterious figure will be confined to one specific room…

Initially, I thought this meant he was possibly the bellhop, waiting to drop off your luggage. However, upon further reflection, I started to realize that the room number itself could hold much more significance. Odds are, this wasn't just a random number Murphy was tossing out to us. Perhaps this is the room where Mr. March was murdered (or where he conducted his own murderous activities before eventually getting killed himself), and he's been haunting the room ever since. Plus, the fact that he's "waiting for you" seems to indicate that he's been there for quite some time and can only be found in that particular location — almost as if he's unable to leave.

Keep in mind that this is just a working theory, of course. Though if you really want to up the prediction ante, you could also form the conclusion that Peters' character is of an elderly nature. I may be over-reaching on this one, but I usually don't think of addressing someone so formally unless they're significantly older than me, out of respect. So either the writers simply couldn't be bothered to give the character a first name, or they meant for it to be a subtle clue regarding Mr. March's age.

Don't worry, though, ladies. I'm sure Evan Peters will still manage to make us swoon, regardless of how old he may or may not be. Something tells me he could totally rock the whole silver fox look.

Also, is it October yet?