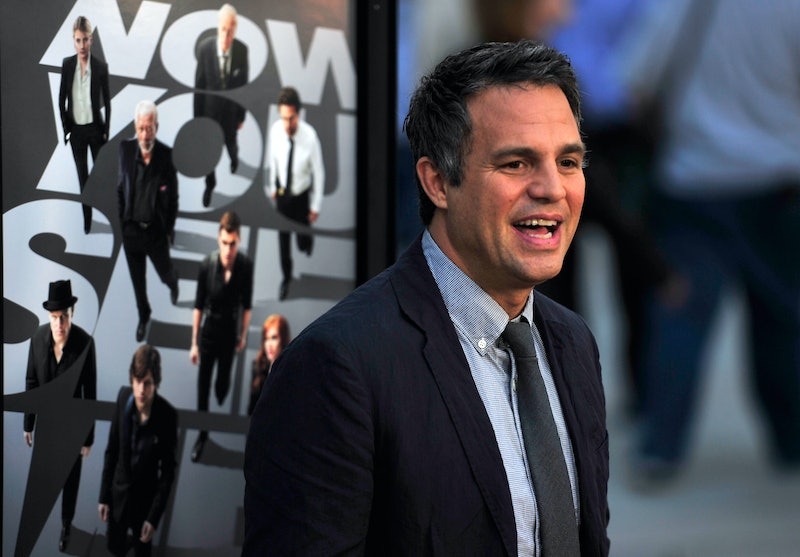 Alright, this is one of the few times I will ever say this: Thank you, Reddit. Thank you for your deft skills of perception and understanding the needs of our times. Where hilarious tales of illicit activities done in public on that accident tip can live free, roaming about the Internet as they so please. Especially when they involve Mark Ruffalo, the world's most handsome stoner-dad-who-isn't. Because in a twist I never thought possible, the world's most charming Hulk has made himself all the more charming with the retelling of the time he smoked real pot on stage in a play. Woopsie poopsie!

Of course he could only get away with telling this story on a UK-based late night program like The Graham Norton Show, where people understand that a.) accidents happen, b.) we're all people, and c.) hilarious stories can be taken for what they are and not misconstrued into a tale of "Mark Ruffalo Is Totally Glamorizing and Advocating For Marijuana Use!" like here in America.

Our question is: which play is this, and who's the cheeky actor in question? My money's on Ruffalo's 2006 stint on Broadway in Awake and Sing!, which also starred Lauren Ambrose alongside Pablo Schreiber (yes, Liev's brother and Orange is the New Black star). And we could totally see Pablo pulling a stunt like that, don't you?

It's sort of like that time I got roped into going to a showing of Twilight in New York City, and guess who was there? Graham Norton and a gaggle of his friends, traipsing in behind us and running hurriedly to some of the most front-and-center seats in the place. See? Life embarrasses us all, you guys. It's not a big deal — sort of like pot.

More like this
You’ve Got 'Love Island’s Farmer Will All Wrong
By Jack Orenstein
Melanie Lynskey Plays A “Ruthless Leader” In 'The Last Of Us'
By Brad Witter
The Meaning Of Steve Lacy’s “Bad Habit” Lyrics
By Radhika Menon
The Full EGOT Winners List: Only Viola Davis & These 17 People Are EGOTs
By Radhika Menon, Marina Watts and Grace Wehniainen
Get Even More From Bustle — Sign Up For The Newsletter
From hair trends to relationship advice, our daily newsletter has everything you need to sound like a person who’s on TikTok, even if you aren’t.