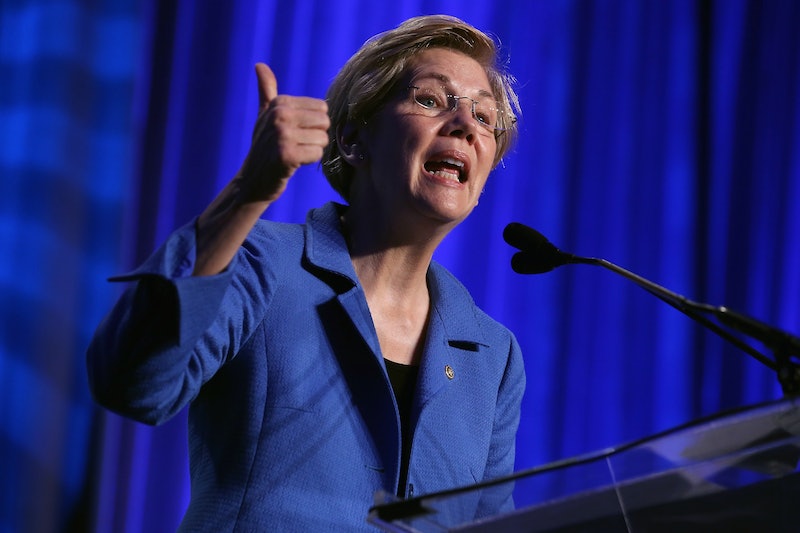 Some Republicans have just loved taking cheap shots at Planned Parenthood, but Sen. Elizabeth Warren has come back swinging. On Monday, the scrappy Democrat spoke to the Senate on Sen. Joni Ernst's bill, which would defund the nonprofit. Ready with her dukes, Warren defended Planned Parenthood and women's rights. Ultimately, the bill failed to get the needed 60 votes.

Warren opened her speech with the perfect statement: "I come to the Senate floor today to ask my Republican colleagues a question. Do you have any idea what year it is? Did you fall down, hit your head, and think you woke up in the 1950s? Or the 1890s? Should we call for a doctor?"

No, it's certainly not the way to make herself popular among her comrades across the aisle. But the question perfectly captured the thoughts of anyone who knows what fantastic services (which, yes, include safe abortions) Planned Parenthood provides. Warren added: "Because I simply cannot believe that in the year 2015, the United States Senate would be spending its time trying to defund women's health care centers. You know, on second thought, maybe I shouldn't be that surprised."

I'm not surprised, either. Ever since the onset of Planned Parenthood's new scandal, in which an edited video purported to prove that the organization sells fetal parts for profit, Republicans have been excited about the chance to try to pull its funding.

Someone in Congress is finally calling them on it in a direct, tough-love way. Warren cited other examples of Republican plans to control women's bodies. She reminded her fellow Senators of when they threatened to shut down the government if they weren't allowed to change the law that allowed employers to deny their workers access to birth control. She reminded them of the time Republicans held up a non-controversial bill that would fight human trafficking because they hoped to get new anti-abortion restrictions. She also reminded them that the GOP tried to stop the only federal grant program that provides birth control, HIV testing, and STD screenings for working-class people.

Warren points a finger at lawmakers outside of Congress, as well. She said that throughout the past five years, Republican state legislators have passed more than 300 abortion restriction laws. She also called her audience to be real for a second, saying:

In this speech, Warren fought scandal and lies with honest conviction and hard facts. And for once, it worked. Planned Parenthood will not be defunded this week at least. She ended by saying:

I want to say to my Republican colleagues: The year is 2015, not 1955 and not 1895. Women have lived through a world where backward-looking ideologies try to interfere with the basic health decisions made by a woman and her doctor. And we are not going back. Not now, not ever. The Republican plan to defund Planned Parenthood is a Republican plan to defund women's health care. For my daughter, for my granddaughters, for people all across Massachusetts and all across this country, I stand with Planned Parenthood, and I hope my colleagues will do the same.

More like this
24 History-Making Black Women You Probably Didn't Learn About In School
By Ayana Lage and JR Thorpe
25 Inspiring Quotes From Black Women To Celebrate Black History Month
By Kyli Rodriguez-Cayro and JR Thorpe
Here’s Where The NHS Nurses’ Strike Currently Stands
By Sophie McEvoy
Twitter Is Identifying With Sally Field & Jane Fonda’s Friendship In New Viral Video
By Jake Viswanath
Get Even More From Bustle — Sign Up For The Newsletter
From hair trends to relationship advice, our daily newsletter has everything you need to sound like a person who’s on TikTok, even if you aren’t.