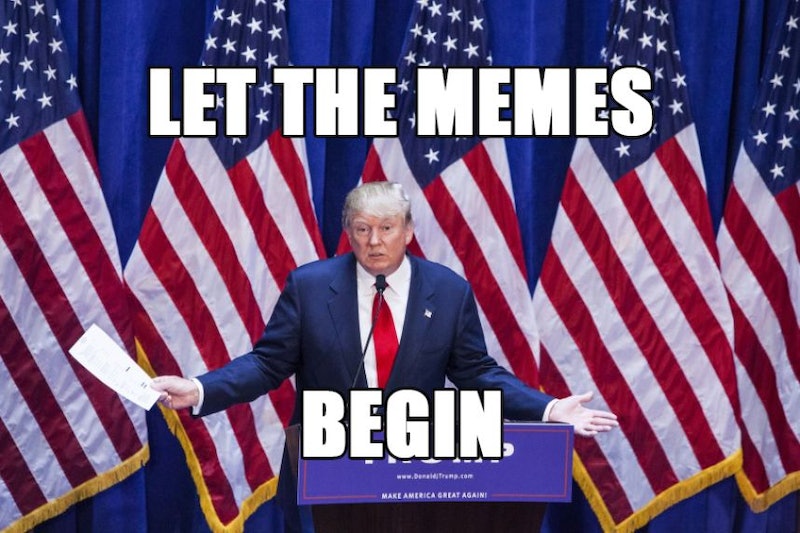 The 2016 presidential race is well underway, and along with the all-important task at hand of electing America's next president, it's also been providing endless entertainment. Thanks to candidates like Donald Trump, the sheer absurdity of how large and unwieldy the Republican field is becoming, and Hillary Clinton's unprecedentedly high chances of becoming the first woman to be elected to the White House, it's only natural that the Internet is going to have some fun with 2016 coverage. And you know what that means: election memes galore.

Although meme-makers are normally equal opportunity offenders, there are some candidates who invite more mockery than others, while some are practically begging for it. There are also a few lucky ones who seem to be in the good graces of the Internet, as most of their memes only further highlight how awesome they are. Despite a couple of ringing endorsements, one thing is for sure: No candidate is safe from the meme-generating clutches of the Internet. As long as people have the ability to Photoshop and caption, memes will be made. We should all be grateful, because they certainly make an otherwise dry political process feel like a trip to the circus.

Here are the best 2016 presidential election memes so far, broken down by candidate.

Donald Trump Is A Gift That Keeps On Giving

Marco Rubio Will Never Live Down That Water Bottle Incident

The Internet's Consensus On Hillary: She's A Badass

Scott Walker Is Not The Sharpest Tool In The Shed

Rick Santorum Is A Hypocrite