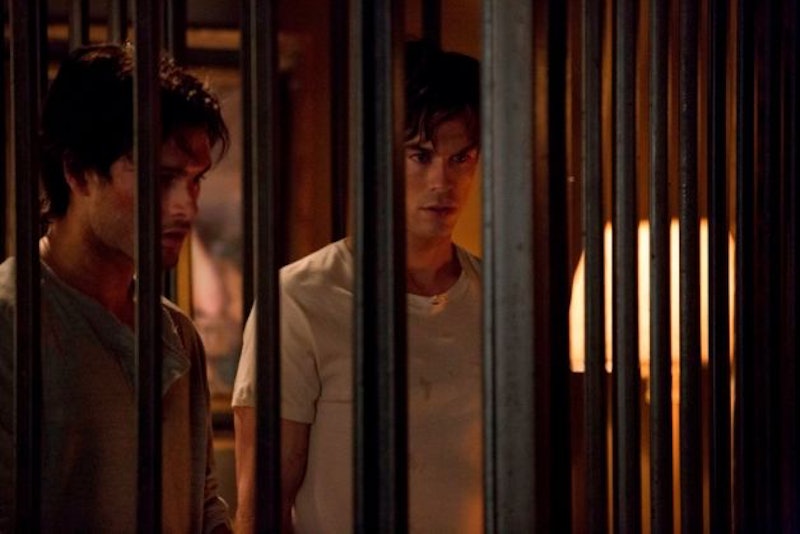 After a two-season run of pure awesomeness with Seasons 3 and 4, The Vampire Diaries has struggled a little to find its footing in Season 5. It's not an uncommon thing, of course; the series' high school characters graduated and moved onto college this season. It's a hard transition for any series. Buffy the Vampire Slayer faced a similar uphill struggle in its fourth season. It's hard to top senior year... when you're a TV character at least. But Season 5 is finding its way, staying fresh with some new obstacles like Bonnie's changing role in the world/group and Elena's new inverted relationship struggles (When Stefan was memory-less at the beginning of the season and in total bad boy mode, she found herself drawn to him in spite of her commitment to Damon.) In this week's installment, "The Cell," the series delved into Damon's past with the new Big Bad, to borrow some terminology from the Buffyverse.

The episode was full of some pretty big OMG-my-jaw-just-hit-the-floor moments. One of the things that makes TVD so great is its willingness to do things the audience won't like because they're necessary for the story (see every season finale's death). There were definitely a few moments this week that might have had some fans screaming at the TV. Here they are:

1. Stefan and Katherine… you know. Katherine has been one of the show's ultimate villains since her introduction, but this year, her character has been thrown through one hell of a twist: Elena fed her the cure, making her human, and now she's dying of old age. Impending death has made Katherine less of a bitch, but knowing her it's probably just part of a grand plan to be sired into a vampire again. This week, she turned her probably-not-altruistic-goodness at Stefan, who has been suffering major PTSD after the memories of his time in the safe were restored. Of course, you know Stefan can't resist a doppelgänger when she's in her weakened human state, and they end their part of the episode on a bang. Literally. Caroline overhears the lovefest with her vamp hearing and has pretty much the reaction that everyone else on Team Stefan probably had.

2. Damon was viciously tortured... for five years. Elena and Damon are captured by the Augustine group, which studies and tortures vampires. They've been at their "research" for a while, it seems. Back in the 1950s, Damon was unfortunate enough to fall into their clutches, and he stayed there, undergoing painful experiments (like having parts of his eye cut out to see how long it would take for him to regenerate) for five full years. He eventually escaped, of course, but he never told anyone about his experiences there – not even Stefan. This highlights the difference between how Stefan and Damon handle trauma; Damon was able to keep his entirely secret, while Stefan has to have people locked in safes with him to help him battle dangerous, ripper-inducing episodes of PTSD.

3. Damon is still delightfully evil. Damon has always been the bad boy, the dangerous brother who enjoyed his vampirism and being a villain. He put a lot of those instincts on pause because he's been bending over backwards to woo Elena for the last half decade, but this week we found out that he's not totally Stefan-fied after all. After he escaped from his torturers, Damon vowed to have revenge on them. His grand plan involved killing all but one member of the family every generation, leaving just one person to carry on the line… and then slaughtering the new, resulting generation. It turns out he's been true to this pursuit and that his most recent Whitmore kill happened at the beginning of his and Elena's perfect summer. He's still be killing more or less in cold blood, even when he and Elena are in their happily ever after honeymoon period. She's floored and disgusted and probably wants Stefan back now that he's banging Katherine. You know, typical TVD drama.

The episode ends with Elena about to undergo experiments and meeting the friend that helped Damon escape during his last time with the Augustine's (Damon left him for dead to save his own skin when it came down to it). That should be an interesting reunion.

More like this
Theo James Revealed The Truth About His 'White Lotus' Nude Scene & Fans Can't Cope
By Stephanie Topacio Long
The ‘White Lotus’ Cowboy Theory May Spell Danger For Tanya
By Grace Wehniainen
The 'Kenan & Kel' Reunion On 'SNL' Took A Dramatic Turn, Thanks To Keke Palmer
By Brad Witter
Keke Palmer Just Announced She's "Going To Be A Mom" On 'SNL'
By Brad Witter
Get Even More From Bustle — Sign Up For The Newsletter