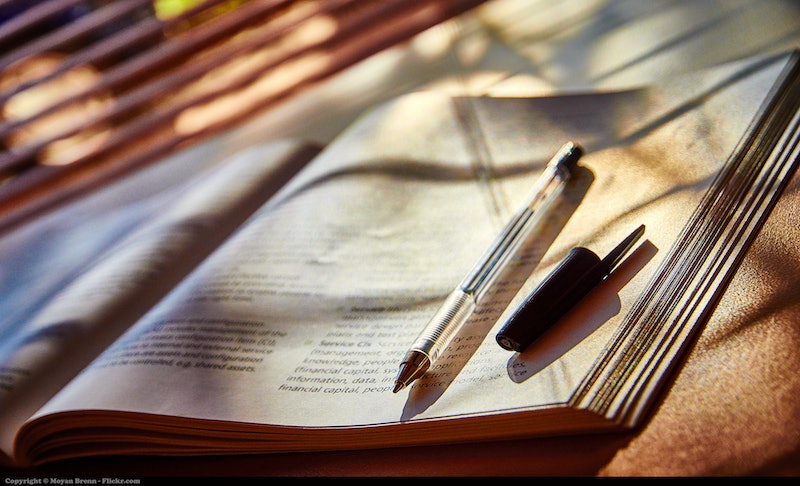 While you might find yourself beyond busy at college — clubs, sports, Greek life, social events, etc. — it's important not to forget the real reason you're there. Getting an education is priceless, so if you spend a majority of your time cramming for tests at the last minute, you're actually not only losing sleep, but you're basically dropping dollar bills down the drain at the same time. These eight easy study hacks can help solve that problem for you. It's important to make the most of your education, and actually absorbing what you learn in class is a huge part of that.

Studying doesn't have to feel daunting. In fact, it can actually be kind of fun if you let yourself be in the right state of mind. After all, you get to choose what it is you're learning about, and even more specifically, what classes you're going to take. These study hacks are quite simple in practice, but they do take someone who is strongly disciplined to put into action. Trust me, you'll have plenty of time for house parties, social gatherings, and extracurriculars on the side, but make sure your primary focus is exactly what you came to college for in the first place. A reputation at a sorority probably won't get you your dream job, but a transcript filled with straight As just might.

1. Write out everything you know

Ever think you're all studied up, and then sit down to take your test and totally blank out? Just because you read something doesn't mean it will automatically stick in your brain. The tried and true way to make sure you've retained something is to write it all out. Once you've gotten everything down on paper, compare it to your notes to see what's missing.

Playing classical music in the background while you're studying is a great way to keep from becoming distracted. It can be a motivating force while you work, while its lack of lyrics prevents you from focusing too much on the actual songs themselves.

The best way to learn something is to be able to teach it to somebody else. Joining a study group will give you the opportunity to explain what you know to a peer, further cementing it in your brain, and helping somebody else out in the process. Another bonus? If there's anything you're unclear on, you can receive help from other members of the group.

Obviously, you don't want to cheat by getting your hands on old exams, but that doesn't mean you can't search Google for some practice tests on the subject you're trying to master. Make sure you time yourself as well — test taking is 50 percent learned material, 50 percent timing.

5. Write down what you're most likely to forget at the beginning of the test

If tests have a tendency to frazzle you, you're not alone. Any information that you think you might forget or confuse while you're rushing through your exam should be the first thing you write down when you begin your test. Get dates, names, and any other detailed facts down on paper as soon as you can.

It's amazing how much more information sticks in your brain when it's learned not only audibly, but also visually. While every subject doesn't have a set of diagrams you can work off of, color coding your notes is a wonderful way to help your brain remember the facts a little bit better.

7. Listen to your lectures while you're on the move

Pause Pandora for a second, and take advantage of the fact that you live in a generation where lectures are available via podcasts. Between classes, while you're at the gym, or on long bus rides, pop in the earbuds, and listen again to your lectures. You will likely pick up a many more details than you did the first time around.

8. Stay on top of your studies

You've probably heard it a million times, and you'll likely hear it a million more. Don't fall behind with your studying. If you take a couple hours a week to review what you've learned, when finals week rolls around, you'll be way ahead of the game. It's a small price to pay for a very big reward.