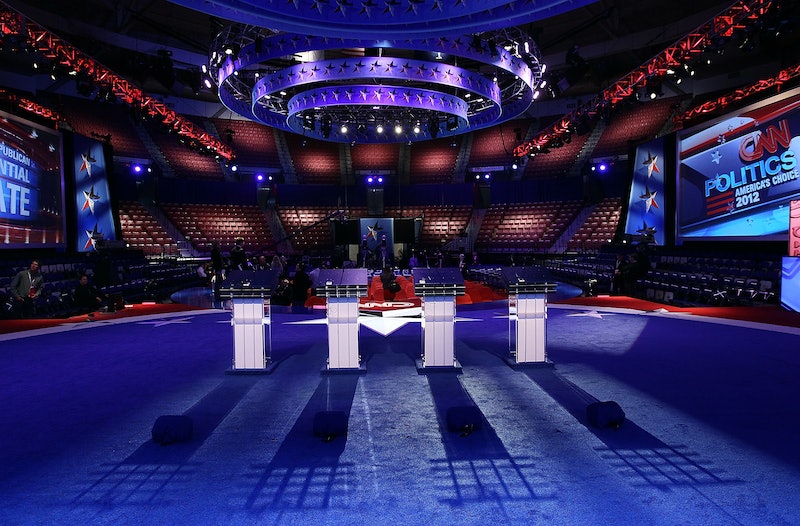 If you're planning on tuning into the first round of GOP primary debates on Thursday, you're in for a good time. From the usual firework antics by candidates like Mike Huckabee, Ted Cruz, and Donald Trump, to the predictable smackdown that candidates like Chris Christie will undoubtedly deliver, there will likely be no shortage of Twitter-worthy moments to keep you on your toes. With all of the frenzy, however, there are bound to be a few ugly moments. Although you'll probably be busy taking copious amounts of notes Thursday evening (or rather playing Trump drinking games, let's be honest), the real challenge will be to watch out for an assortment of untruths that Republicans can't seem to stop parceling out to the masses.

Tackling some of the obvious issues, like the oft-panned "Obamacare" (or, "Obummercare", as your right-wing uncle lovingly calls it), will likely be one of the first items on the docket. It's a surefire way to rile up the crowd, after all. And though Bloomberg op-ed columnist Francis Wilkinson pointed out on Monday that the majority of debate exit polls showed most prospective voters were most concerned with the economy, it's not likely they'll discuss it very much, outside of the candidates hurriedly climbing over one another to see who can discredit President Obama the fastest.

Other topics likely to be discussed on Thursday are immigration (which Trump will love), abortion (thanks to the recent Planned Parenthood fiasco), ISIS and the Middle East, the newly minted and much criticized Iran deal, and gay marriage — which, though legalized, remains a huge sticking point with the religious right. Probable courses of discussion might also include pay equity and the minimum wage, the Trans-Pacific Partnership, and the most popular bridge topic of making fun of Hillary Clinton.

Here are just a few of the "untruths" that you'll want to listen for as they discuss those topics at length.

As previously mentioned, no one will appreciate this topic more than the ever-outspoken Trump, who told attendees at his official campaign launch in June that Mexican immigrants were "rapists" and "drug users."

What to watch out for: "Illegal immigrants are stealing our jobs/taking advantage of our tax dollars! This must change!"

What the facts say: Unskilled workers looking to find a way to put food on the table only account for a small portion of the jobs filled and, subsequently, the money being paid out to the country's employees each year. In New York alone, for example, the average unskilled, undocumented construction worker makes around $25,000 — much less than the typical bottom-rung, documented construction worker, who generally makes around $38,000.

Also of note, a 2013 study by University of California, Davis economics professor Giovanni Perri showed that undocumented workers didn't compete with domestic employees. In reality, they tended to boost the salaries and hours of the skilled workers around them, given that they were able to play support roles to those trying to focus on one particular area. According to an August 2014 report by the Social Security Administration's chief actuary Stephen Goss, undocumented workers practically pay for your benefits too: Federal data showed that undocumented workers paid an estimated $100 billion in social security funds over the past decade — money which they won't be able to take advantage of due to their status.

The majority of the GOP candidates have heavy opinions on this topic, due to the viral sensationalism surrounding the notoriously manipulated videos released last month by the Center for Medical Progress (ominous title, I know).

What to watch out for: "There are plenty of places for women to get health care services! Stop Planned Parenthood from using your tax dollars to kill babies!"

What the facts say: There are so many things wrong with the current conservative line of talking points on abortion. The No. 1 issue at hand is the debate over the other services Planned Parenthood provides, which make up about 97 percent of its total expenditures. National Family Planning and Reproductive Health Association president Clare Coleman stated on Thursday last week that outside clinics would be unable to handle the surge of patients stemming from closed Planned Parenthood centers if the organization was suddenly defunded.

In addition, it's important to note that since 1997, it has been illegal for any clinic that is federally funded to use tax dollars on abortion procedures. Any abortion services provided must stem from separate financing. Basically, if the GOP wins in 2016 and defunds Planned Parenthood, they'll essentially be taking money from all of the non-abortion services it provides — not the abortion services themselves. Smooth move, guys.

Prepare yourself for convoluted red herrings about who's the tougher candidate. While each Republican presidential hopeful has a definite opinion on Iran, ISIS, and the general instability surrounding the Middle East, very few of them actually know what they're talking about.

What to watch out for: "The Iran deal is a horrible deal!"

What the facts say: None of the candidates have actually read the deal. Next question.

What else to watch out for: "ISIS and fundamentalist Muslims must be stopped, and Obama is doing nothing!"

What the facts say: There's very little that the United States can do right now except wait for our allies in the region to get themselves better situated. So far, U.S. military commanders have provided Syrian rebel fighters with the ability to fight back against ISIS — something they were already gladly willing to take on — but there was a slight problem. Turkish fighters, who promised recently to back U.S. forces by implementing air strikes on ISIS-controlled regions, also have a stake in the fight against — you guessed it — Syrian rebels. Which, yeah, sort of complicates things for us. Right now, the United States is engaged in a careful dance between the two in order to bring both into the fold, but in-fighting is making things much more complicated than the GOP would have you believe.

GOP candidates love to roll out this talking point like they're beating a dead horse. It will more than likely come up, and if not, expect some sort of backlash about it on Twitter later.

What to watch out for: "The Supreme Court cannot make a law! This is unfair for religious people/people who hate Obamacare!"

What the facts say: The candidates are right (shocker, I know): SCOTUS justices can't make laws. But then again, that's not what they did. In passing down its ruling on June 26, the Supreme Court interpreted the Constitution and reaffirmed the rights of the people to marry whoever they please. In no way did the Court produce new legislation like some sort of judicial cocoon bursting open into a rainbow-hued butterfly. In terms of the ACA healthcare ruling, the nine justices did the same thing. SCOTUS interpreted the law as it was enacted, and the Court simply gave its official and final opinion on the matter, to which Congress is more than welcome to add. But no matter how loud the right beats its drums, it won't be able to repeal the rulings, something that candidate and former Pennsylvania Sen. Rick Santorum and so many of his cohorts have promised he would do. Sorry Rick & co., it looks like you need to head back to civics class and rethink your arguments.