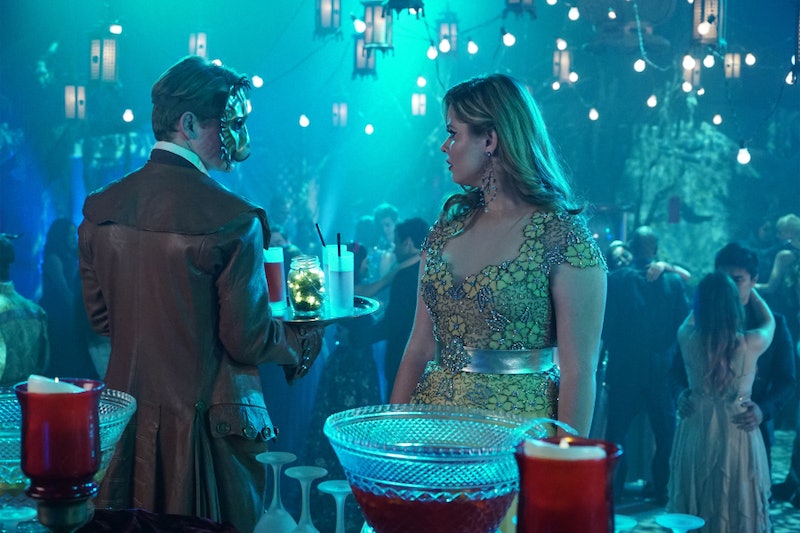 What does it all mean? If I didn't find myself asking that question at the end of Pretty Little Liars every week, something would probably be wrong. And Tuesday night's "Last Dance" was no exception. After what seemed like a slow episode, Ali finally met her brother and it was one of the most terrifying and interesting moments I. Marlene King has given us in Season 6. Ali went totally rogue on Tuesday night — going to the prom behind everyone's backs — and came face-to-face with the person whose identity has haunted PLL fans for the past five seasons. So, does Ali know Charles on Pretty Little Liars ? Her reaction to "meeting" her brother for the first time in her memory might've been a huge clue for next Tuesday's finale.

Ali was hellbent on meeting Charles on Tuesday night — which we obviously learned during last Tuesday's episode when she drugged Lorenzo so she could steal his badge and break into the Rosewood P.D. — and she finally did. For most PLL fans (myself included), it was probably so infuriating that Ali saw AND RECOGNIZED Charles' face and we didn't get to see it ourselves (even though we know that's coming next Tuesday), but maybe this was the greatest clue I. Marlene King could've ever given us? I don't want to give this situation — or Ali — too much credit here, but it was truly obvious that Ali knew the person that's supposed to be here estranged brother. So, who could it be?

Two different scenarios could be happening here — it really is someone that Ali knows or it's just someone wearing the black hoodie and doing Charles' dirty work yet again. Honestly, I wouldn't be surprised if it's the latter. It wouldn't necessarily be unlike the PLL team to pull the rug out from under us this close to the finale AND we all know that more than one person has worn the black hoodie over the past five seasons. It's important to consider the possibility, but, if we're really taking the #SummerOfAnswers at its word, we can be a little more optimistic.

At this point, even though Ali recognized the face of the person who's supposed to be Charles, it still could be anyone's game. Sure, Ali never really encountered Wren on the show, but we all know she's been staring over the Liars' shoulders this entire time — she has to know who is he is by this point. But, we also can't really write off the theory that Wilden is Charles. Ali would DEFINITELY recognize him. What can we do with this clue then? It looks like we're in for a surprise either way when the Pretty Little Liars finale airs, but at least now we know not to get our hopes up too high for the ultimate answer.

More like this
Everything We Know About King Charles III's Coronation
By Sophie McEvoy and Sam Ramsden
Princess Charlotte Proved She's Wise Beyond Her Years At The Queen's Funeral
By El Hunt
'House of The Dragon' Episode 6 Will Take Place A Decade After Episode 5
By Kadin Burnett
The ‘Emily In Paris’ Season 3 Release Date Is Here, Plus The First Footage
By Bustle Staff
Get Even More From Bustle — Sign Up For The Newsletter