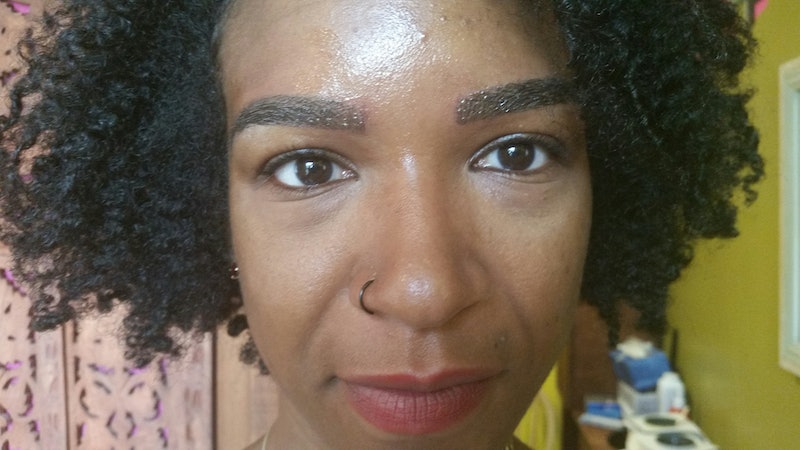 If I had to choose one makeup product that I couldn't go without it would be my eyebrow kit. However, adding all that powder takes time, so one day I decided it was my moment to get some eyebrow tattoos. I went with a brow reformation by brow expert, Hibba, at her salon in Soho, New York City. For me, this was not something I had to think twice about. If I could get my eyebrows tattooed without looking like my eyebrows were tattooed then I could only assume my life would change forever — and it definitely did.

I already have plenty of ink, so I wasn't scared of the pain at all. In fact, after I booked my appointment I was feeling pretty confident about the whole thing. I spend about 20 minutes a day painting my eyebrows already, and I figured that anything that did go wrong could easily be corrected with my current eyebrow kit. Fortunately, Hibba did such an amazing job that I walked out of the salon strutting my flawless brows like I was in a Beyonce video. Getting your eyebrows tattooed can seem like a permanent, risky decision, but if you've got the cash to spend on this new tattoo process, I highly recommend it.

The process is pretty straightforward, but there are still some things to consider before you go under the needle yourself. Here are seven things to keep in mind while you make your decision.

1. It Will Look Fairly Natural

My naturally sparse brows after years of shaving and tweezing.

My brows after Hibba.

Most people swooned over my eyebrows, but of course, there were still haters who frowned and said "I just like things natural." Hmph. In my opinion, getting my eyebrows tattooed was merely restoring my brows to their natural state, pre-Kristin-induced-abuse. I have definitely been the sole reason my eyebrows are so scarce; I shaved them off in my teens for an ultimate goth affect, indulged in over-plucking, and slept in my painted brows. This is likely what they would have looked like now anyway if I'd just left them alone.

My eyebrows with its usual brow kit.

Unlike makeup tattoos of the past, Hibba's brow formation doesn't last an eternity. At first, this deeply saddened me — until I realized that tattooing the top layer of the skin gives a much more natural effect. Not only that, but eyebrow styles change (please refer back to high school yearbook photos circa 1999). With a treatment that lasts one to two years, you can still change your brows with the times.

3. You Should Get A Thorough Consultation

My eyebrows after threading and being brushed by Hibba.

The reason my appointment took two hours wasn't because the tattoo took that long to apply. In fact, the actual inking only took about 15 minutes. Hibba and I spent well over an hour playing with my natural brows. I painted on my eyebrows before my appointment so she could see what I was comfortable with. Then we spent a lot of time chatting about my brows, drawing my brows, threading my brows, and drawing more brows. If your brow reformationist is rushing you, it's not the right place to be.

4. It Hurts Less Than Other Types Of Tattoos

My eyebrows with sharpie and a numbing agent pre-tattoo.

If you've ever gotten a hair relaxer, then you can stand the level of pain that comes with brow reformation. If you've ever gotten a tattoo before, you can rest assured that this one will hurt significantly less. For me, the only pain I felt was my eyes from the bright light shining directly into them, but my eyebrows only experienced slight stinging, similar to a tattoo.

5. The Healing Process Is Super Important

My eyebrows seconds after being tattooed.

Since brow reformation isn't exactly like your standard tattoo, the healing process is slightly different. Common tattoos we get at tattoo parlor are using needles that will go several millimeters into your skin, while brow needles go only 1mm deep. That means you can't get your brows wet for five to seven days to avoid changing the color of the strokes. Your brows will flake like a tattoo, and I'm now convinced that if you can survive your eyebrows flaking for a few days, you can survive anything. On day four, my brows were having a flake-fest and I wore a huge black floppy hat to keep avoid any stares. But, oh, it was worth it.

6. They'll Take Getting Used To

My eyebrows six days after being tattooed.

I usually paint my eyebrows on to be bigger and darker than they were when Hibba was finished with my transformation, so the super sleek shape was something I had to get used to. I actually dreaded the fact that my brows would lighten during the healing process, flaking off precious density. After a week, I'm happy to say that while they aren't as dark as I usually yearn for, I'm realizing they are 100 times better than my brows were a week ago. If you want to go darker or have any changes, Hibba offers a free touch up after the first four weeks to ensure your healing went according to plan and you are happy with your brows.

All in all, if you have the cash, I'd highly recommend this process. I'm saving loads of time in the morning that usually would be devoted to powder, and my brows have never looked better.

More like this
What To Know About Brow Microshading Vs. Microblading
By Danielle Sinay
Pat McGrath’s New Highlighter Duo Will Give You A Galactic Glow
By Tomi Otekunrin
The Friends Of Glossier Summer Sale Is Back
By Tomi Otekunrin
Charlotte Tilbury Just Launched A Royal Collection To Mark The Queen’s Platinum Jubilee
By Tomi Otekunrin
Get Even More From Bustle — Sign Up For The Newsletter