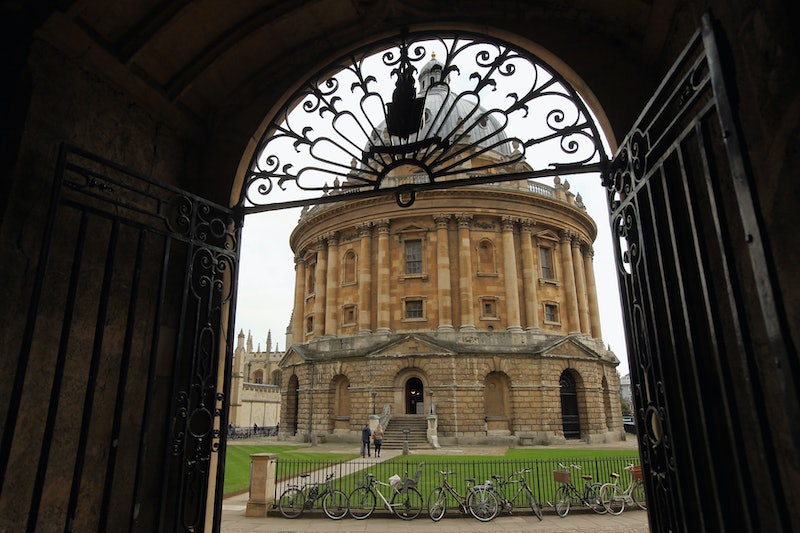 If you live in Chicago and love books, you are in for a serious piece of good news in 2016. The American Writers Museum is planned to open next year, and it essentially looks like the kind of place a book-lover (particularly one who loves American literature) could go and nestle for days, if not weeks. It's going to be one of the biggest sites in the history of American letters, spanning everything from banned books to the Lost Generation and Native American writers. (Can you tell I'm excited?) While we're waiting for that, though, there are some pretty awesome museums for book-lovers worldwide.

Their existence is all the more important because one of the major museums of manuscripts worldwide, the Musee des Lettres et Manuscrits in Paris, closed — possibly permanently — this year, after its owner was investigated by French police over some serious account-fiddling. Which is a massive shame, because now the letters and manuscripts of Proust, Verlaine, Baudelaire, and Tolstoy may be sold and dispersed around the world to private collectors. It's a big loss to those of us who aren't multimillionaires.

However, hope remains. Whether your love is manuscripts or famous authors, ancient texts or modern classics, there's somewhere in the world that has an exhibition that'll blow your head off. Here are nine places to put on your book-loving bucket list.

The Victoria & Albert Museum may have a bigger collection of children's books (if you're in London, check the V&A's website to see if they have any book-themed exhibitions), but the British Library's permanent, free exhibition of their Treasures is a sight to behold. It has the first manuscript of Beowulf, Handel's hand-written Messiah, the world's earliest printed book, and so much else your eyes are liable to bulge out of your head. They also have exhibitions — usually British-themed — that inspire them to pull other things out of storage; this year is the anniversary of the signing of Magna Carta, so guess what's on exhibit?

The author of Of Mice And Men and other American classics has had his name attached to an extraordinary museum in his hometown of Salinas, California. If your interest is in literary artifacts that inspired famous books, the Steinbeck Exhibition Hall is for you: it's got Steinbeck memorabilia of all kinds, from literary manuscripts and letters to objects that found their way into the novels themselves. The detail is pretty mind-blowing, and the rooms try to follow the progression and feel of each famous book — so read the entire back catalogue before you step in the door.

The Morgan isn't exactly off the beaten track in New York — you might have to fight through a few tourist hordes — but it's worth a visit for its incredible collection of historically significant books. Estblished by the incredibly wealthy Pierpont Morgan, the museum is basically what a book-lover with a lot of money would dream of. Want a peek at the original manuscript of Thoreau's Walden Pond (pictured)? It's here. So are first editions of Lord Byron, Nabokov, Plath, Mark Twain and Edgar Allan Poe, plus a famous collection of medieval manuscripts, the letters of Jane Austen, the only known manuscript of Milton's Paradise Lost, and Dickens' Christmas Carol draft. And three Gutenberg Bibles. Because who can stop at just one? Prepare to be boggled.

4. Shrine Of The Book, Jerusalem

Jerusalem's Shrine Of The Book holds the famed Dead Sea Scrolls, the remarkable ancient scrolls discovered in caves in Qumran starting in 1947. It's a museum designed around some slender fragments of parchment and papyrus — but what pieces they are. The Dead Sea Scrolls are some of the most important writing in world history: they include the third-oldest manuscripts of the Hebrew Bible, and the Shrine holds seven of the books that were discovered. The design of the Shrine itself is meant to evoke the jars in which the scrolls were found, preserved for thousands of years. This isn't so much a museum as a place of intent worship, so be prepared to be respectful.

It would be easy to argue that, as an Oxford resident, I'm biased, but the Bodleian libraries are probably the most important libraries in the English-speaking world. Bar none. They have a special warrant for one copy of every book published in England, and whatever rare literary wonder you want to find — a Gutenberg Bible, a First Folio — the chances are high it's here. A new library, the Weston, currently hosts an exhibition called Marks Of Genius displaying a teeny fraction of treasures from the Bodleian's collections, from a version of the Magna Carta to Mary Shelley's first draft of Frankenstein and a first-edition William Blake. Phew.

If you're a fan of both Kafka's literature and seriously interesting museum design, the Kafka Museum is your best bet. The museum aims to represent not only the physical elements of Kafka's life, from letters to photographs and drafts, but the essence of his world: weird, discombobulating, overrun by surrealism, and bureaucracy gone mad. There's even a maze made out of filing cabinets to evoke his years as a clerk. It's one of the best journeys inside a writer's head in the world.

The National Museum in New Delhi has one of the most outstanding manuscript collections of Asian and Arabic texts in the world — their catalogue has more than fourteen thousand items. Every classic of the Indian canon is here, but texts can be anything from Chinese to Persian. Holy Buddhist texts pressed on copper, a 12th-century Sanskrit poem on a palm leaf, some of the best Arabic calligraphy in history, the autobiography of the Mughal Emperor Babur: you name it, the National has it. They just had an entire exhibition on Persian calligraphy on decorative objects. That's just amazing.

If you're an Aussie, the name Norman Lindsay rings a bell so loud it goes all through your childhood. If you're not, he's most famous for the eccentric, thoroughly ridiculous Australian fairytale "The Magic Pudding," which he also illustrated himself. And while Lindsay is primarily known as an artist, the Norman Lindsay Gallery & Museum in the Blue Mountains, New South Wales, puts equal weight on his literary endeavors. He wrote several banned novels (one, hilariously, called The Cautious Amorist), and two autobiographies. The museum's going to be bizarre for people who've never heard of Lindsay, so do some research beforehand (and read The Magic Pudding, if only because it's brilliant.)

The Ransom Center's permanent exhibitions only number two, but they're pretty heavy hitters: a Gutenberg Bible and the world's first photograph. You don't get more significant than that. It has a manuscript of Chaucer's Canterbury Tales, plus a giant manuscript collection from some of America's finest poets and authors, from O. Henry to Katherine Mansfield and Robert Louis Stevenson — and they've embarked on a huge manuscript digitization project of their treasures, Project REVEAL. From December they're hosting a massive exhibition on Shakespeare, with early texts on display; if you're a real Shakespeare buff you can venture to the Folger Shakespeare Library in Washington, but you'll need to be a researcher to access the manuscripts.