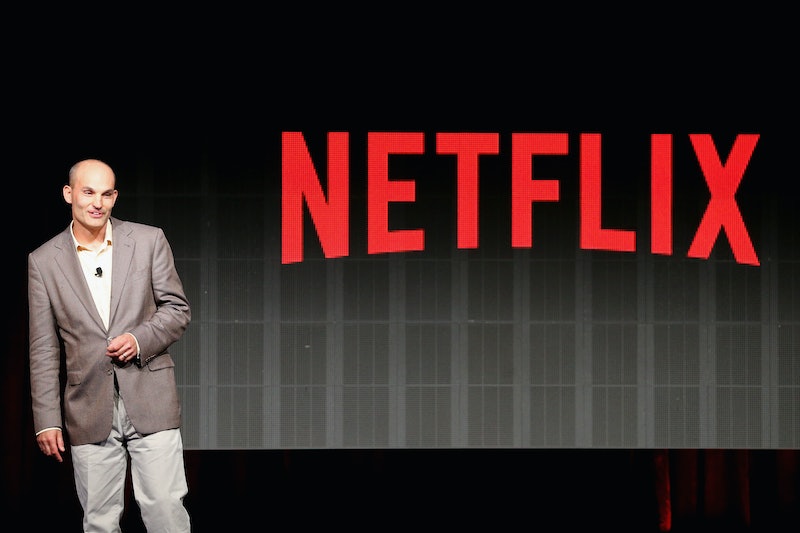 Netflix dropped some major news Tuesday for employees who may be planning to start a family: Parental leave will now be paid and unlimited for one year after giving birth or adopting a child. Woah. And just in case you're thinking there's gotta be some catch here... honestly, it doesn't really sound like it. In fact, in a statement posted to the company's blog, Netflix's Chief Talent Officer Tawni Cranz announced that parents can return to work however and whenever they wish to before that year is up — whether that be full-time or part-time. They can even choose to return right away, and change their arrangement later, if need be.

"We want employees to have the flexibility and confidence to balance the needs of their growing families without worrying about work or finances," wrote Cranz in the post. "We'll just keep paying them normally, eliminating the headache of switching to state or disability pay. Each employee gets to figure out what’s best for them and their family, and then works with their managers for coverage during their absences."

Um, so all of that sounds awesome to me. I'm also guessing parents and parents-to-be at Netflix breathed some huge sighs of relief (and let out a few screams of pure joy) after hearing the news. After all, when it comes to comprehensive paid leave policies, American companies haven't exactly been leading the charge — a fact that President Obama called to task back in January during his State of the Union Address.

In his speech, the president noted that the U.S. is currently the only developed nation that doesn't guarantee paid maternity leave. While the Family and Medical Act (FMLA) does require companies with 50 or more employees to offer 12 weeks maternity leave to mothers, it doesn't currently require those weeks to be paid, and makes absolutely no mention of leave for dads. In contrast, at least 178 other countries around the world do guarantee paid leave for moms — and 71 countries even offer paid leave for fathers, according to the International Labor Organization.

But it looks like the popular streaming service may be paving the way on this front — something that other U.S. companies should seriously take note of. Nearly half of all households now have two working parents, with women as the breadwinners in 40 percent of them; meaning that the need for flexible, fair, and economical paid leave is more important than ever.

Needless to say, the news of Netflix's new policy has been met with a lot of praise in the last 24 hours alone.

Looks like Netflix just gave pretty much everyone a reason to start working there. Not that we didn't already have one, though — the company has long been known as a pretty cool place to work, as evidenced by its whole "unlimited vacation policy" thing, which first made headlines back in 2010 and inspired other U.S. companies to do the same. (Hear that? I think it's the sound of everyone racing to update their resumes.) Of course, only time will tell just how smoothly this new policy goes — here's hoping it's truly as amazing as it sounds.

More like this
34 Quotes That'll Inspire You On Juneteenth & Beyond
By Syeda Khaula Saad and Siena Gagliano
How To Fight For Reproductive Rights, Based On How Much Time You Have
By Courtney Young
Juneteenth Is Now A Federal Holiday — Here's What That Means
By Lani Seelinger and Syeda Khaula Saad
How To Protect Your Digital Privacy If You Need An Abortion Post-Roe
By Kaitlyn Wylde
Get Even More From Bustle — Sign Up For The Newsletter