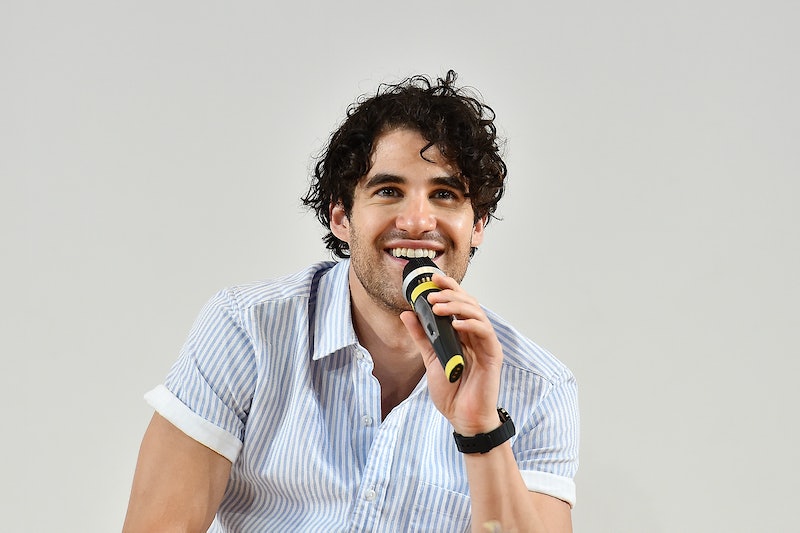 Another guest might check into Season 5 of American Horror Story! Darren Criss is in talks to join American Horror Story: Hotel according to E! News, and he would be an amazing addition to the star-studded cast. This will be his second collaboration with Ryan Murphy, the creator of Glee. Since the two are possibly teaming up again, it makes me wonder what it would be like if Criss' Glee character, Blaine Anderson, was on American Horror Story.

Criss' American Horror Story: Hotel character is "Justin, a Silver Lake hipster who heads to the hotel on Halloween with his equally hip girlfriend to escape pesky trick-or-treaters." Definitely not Blaine! Criss' Glee character, on the other hand, is cheerful, charming and incredibly sweet to his boyfriend-turned-husband, Kurt Hummel. It's hard (but kind of amazing) to imagine him in the dark, twisted world of American Horror Story. On top of that, it's strange to imagine him hiding out in a creepy hotel on Halloween.

That said, I think Criss will be an amazing addition to the AHS: Hotel cast. He's so talented and proves time and time again that his range is incredibly versatile. He's sure to shine in this role as well. We still have a few months until American Horror Story: Hotel debuts in October, so we've got some time to imagine what it would be like if Blaine checked in.

Blaine is a Warbler. It comes with the territory.

Other Guests Might Overhear A Katy Perry Cover Or Two

Who can forget Criss' breath-taking rendition of "Teenage Dream"?

Housekeeping Would Need To Press His Warbler Blazer

How else will he stay polished and performance-ready?

It's the gang's favorite hangout, after all.

Blaine has a lot of friends, so there's a chance that they'd stop by while he's staying at the hotel.

Overall, Blaine is pretty easy-going and respectful, so don't expect his to create a ruckus.

It sounds like Justin is ill-fated, but hopefully Blaine could dodge that same ending.

I don't want to lose Criss so soon after we get him back, you know?