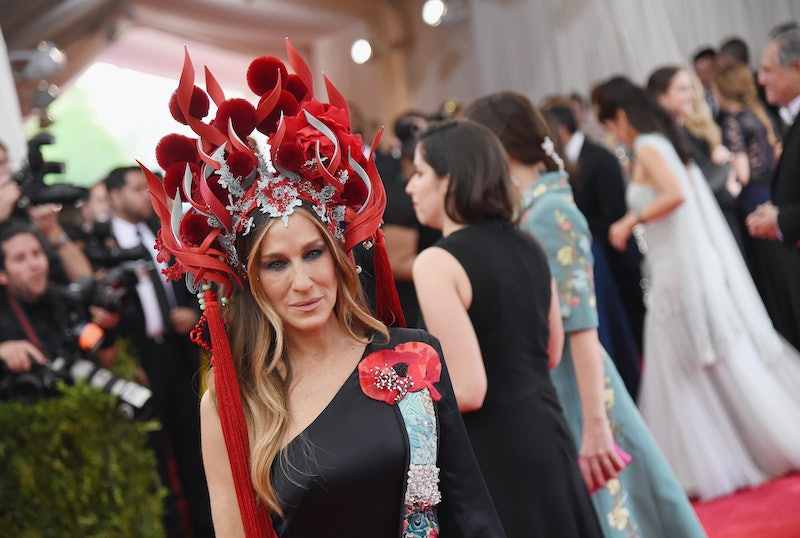 Sex and the City's Carrie Bradshaw is probably the biggest fictional fashion icon ever. Her portrayer is a real life fashion icon and not just by virtue of the role, but I admit there have been many times where I've been totally unable to separate the two. Sarah Jessica Parker posted a photo of a Cosmo, her character's signature drink, noting that life imitates art, and it was like looking at Carrie's IG. That is, if she had one.

The consumption of a Cosmo is not the only time that the lines between CB x SJP have been blurred. There have been several posts on Parker's Instagram that totally imitate Carrie's look and style. Parker is several years removed from playing the character on both the HBO series and in the films, but it will probably always be the role with which she is most associated.

I mean, she's legendary: She made Manolo Blahnik a household name. She defined fashion for the aughts. She caused nameplate necklaces to become a thing.

The problem with those sentences right there? Who is the "she" I am referring to? Is it Carrie Bradshaw or is it Sarah Jessica Parker? The answer is "I don't know."

That's actually a testament to how beautifully the actress brought the character to life.

I don't mean to get so fashion existential. Let's just enjoy the 13 times SJP imitated Carrie's look and style on IG.

Oh, and here's that photo of Carrie's fave bevvie.

Today, stacked rings are super on trend. Just ask Kylie Jenner or Rihanna. SJP rocked gobs of rings, something Carrie would do, since she was always, always on trend.

LBD? Check. Fab heels? Check. Those are Carrie through and through. But it's the fact that SJP is standing on a yellow cab, a NYC signpost, that makes this more Carrie than all.

SJP's 2015 Met Gala dress inspired many memes. But the Philip Treacy headdress is so fashion forward that I thought Carrie Bradshaw was the actress' stylist.

SJP's shoe collection is divine and she promotes it heavily. Since Carrie was known for her love of footwear more than anything else, one can't help but "go there" when a shoe photo meant to promote the actress' own line pops up.

Do I really even need to explain what's going on here?

A Fendi bag? Carrie would so be toting one of those and I bet she'd even like to customize or create her own. Notice the stacked bracelets? That's another reminder of CB.

With the Empire State Building looming in the distance and heels on her feet, this snap feels like classic Carrie. It's her city and her shoes.

Many smooches took place on Carrie's NYC stoop... while she wore heels. So, yeah, they're twinning here.

The coat, heels, and shades have the Carrie factor. I am thinking it's the cobalt color.

Carrie loved her labels and big name designers... this is such a beautiful (and literal) homage.

I can't picture Carrie in those athleisure-style capri pants, even though the stripe nods to the back of all SJP shoes. But surrounded by so many shoes and having trouble deciding which to wear? Oh, yeah, that's pretty much an entire season of episode arcs.

With her own namesake shoe collection to promote, it makes sense to see lots of heels and at all hours of the day and night. This simple shot of SJP in a makeup chair exudes so much of Carrie's fabulousness.

There's no denying that SJP is a fashion powerhouse. But she is way more down-to-earth and family-oriented than the character she played. Her take on fashion feels a bit more playful, whereas it was a serious-as-heart-attack pursuit for Carrie, who would go into deep debt and ditch more than a few meals for the right pair of heels.

Because it was SJP who brought Carrie to life and made a flawed heroine likable, I am now of the mindset that perhaps art imitates SJP's life more than we realized.

Her IG feed is still fun and fashion-forward, regardless.