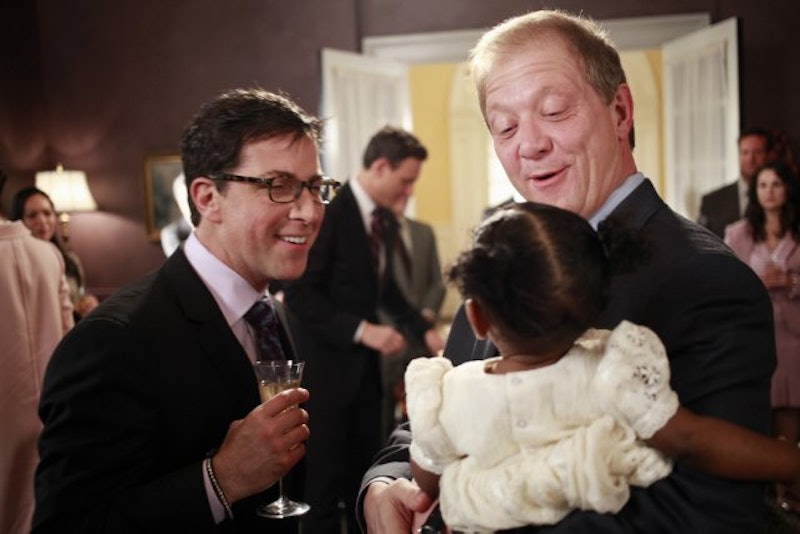 That Shonda Rhimes sure does love to build people up just to tear them right back down, doesn't she? Or maybe it's more along the lines of: she presents one side of who someone is — something that you're comfortable accepting — before flipping the script entirely. All of that was made quite illuminatingly clear on Thursday night's Scandal , when all of the comfort we took in the character and perceived limits of other people were doused in gasoline before dying in an epic, epic fiery blaze. And then stomped on, and then set ablaze again. All before a pigeon came down and pooped on the remains. Because people are people, and sometimes that means they are terrible, and capable of doing no-good, very bad things.

Sort of like everyone else in the world, amirite?!

Now, there is the caveat that this is television — a super-heightened environment where the worst of the worst is not only expected but encouraged to come out and play. Bring on the crazy, bring on the impossible, bring on the larger-than-life! Show us these people's true craptitude. Season 3 thus far has proven that we had no idea what crazy really was, because hoo lord we had not scratched the surface of these people. Which Rhimes herself has stated serves as "a reminder that as much as we all love these people, they’re all still monsters. They’re all still monsters walking around in human skin."

These people are monsters, to be sure, but they're also very much entrenched in their own humanity. That's why we love them. It's a way to see that there's always another side to the coin, but also a friendly reminder that even people we relate to and/or love very much can be really, really shitty. Everyone is capable of the shit, it seems. Especially towards the people they love the most.

Like James! Poor, unwitting James has been Cyrus's pawn for years and when he finally recognized the lengths with which his husband would go to secure some sort of political upper-hand, James loses it. And rightfully so — he is basically married to Beezlebub with a better office and a higher prescription dosage for Nexium. That sort of realization would crush anyone. Relationships are hard, you guys.

But it's James, you think! He's always been so professional, so kind. He would never, he could never! Nobody wants their idea of who someone is to be shattered, but that's the kicker when it comes to humanity: we're often wont to surprise you, and even ourselves; capable of far more than we give ourselves credit for (both good and bad). And that propensity for surprise is exactly what Cyrus never saw coming, because he forgot that people aren't all just puppets being propped up by fixers and staffers and ideals in order to win.

And Cyrus's Achilles' heel is that he thinks of people in very black and white terms. He had already put James in the "good" box, tucked him away with his labels of "malleable, pure, good, professional, weak" and that was that. He could be duped because he was not capable of being "bad" because that box is on the other side of the attic. Cyrus never once considered people's propensity for change. He forgets that he's not the be-all, end-all smartest clever boy in the room, and that not everything in life is about the "win." He's become so entrenched in politics he'd forgotten he lived in the real world, where there are emotions, consequences, and other people to consider.

And James's actions were bad, to be sure, but they were not unfathomable either. Think about it: if you were to come to the realization that your husband was using you to force another man into a scandal with the sole purpose of using the events as leverage in some political smoke-and-mirrors show? That he'd only put a bird in your hand in order to take the whole bush? You'd be pissed as shit, too. After realizing that years and years of sacrifice and abuse and manipulation at the hand of the man you love were probably just for his own selfish political maneuvering, you'd probably think, hey well if I'm getting fucked by my husband might as well get some literal satisfaction out of the deal, right? Nobody is faulting James for this one. Because circumstances changed the game for him, and he surprised even himself that night, and gave Cyrus just the sort of medicine he really needed.

And it goes both ways: people had also written Mellie off as a conniving, scheming political animal in search of success and status above all else. But Season 3 has taught us that she's far more than the image she presents to the world — and that, to a large extent, the world sort of made her that way thanks to Fitz's gross and rapey father, and also her husband's total lack of fidelity. It wasn't always pretty or black-and-white "good" or "bad," thanks to her own drive and determination, but one truth remains as such: Shit begets shit, my friends. Olivia's mom was a victim, Rowan an evil mastermind, and Jake a pawn — but they all proved last night that there are many other colors in these personality rainbows.

And people — first and foremost — are animals, literally and figuratively. And sparks will always fly when you back a wounded animal into a corner.

Just as in those excruciating opening minutes of the episode, where we saw Quinn getting served up a little bit of the Huck Special. "I’ve never done this with somebody in the family, with somebody I love," he stated. And even though this is one-hundred percent, pure, unadulterated Huck we're seeing, it still feels wrong. Probably because we've found ourselves thinking the same way as Cyrus: people are tropes, they are one thing and must stay that way, unchanged, throughout their entire existence.

Which is a, frankly, totally dumb and flawed way to see things, especially people. "We see these people and we identify with them — that doesn’t mean they’re good by any stretch of the imagination," explained Rhimes. "Sometimes you love Cyrus, and he is a monster. There are many people who think Liv should be with Fitz, and he’s an adulterer and a murderer. Huck likes to cut off people’s fingers and toes and abuse them with drills and somehow we’ve decided he’s the sweetest one of them all. So, there’s a very, I don’t want to say 'basic,' but there’s a very simplistic moral world that people want these characters to exist in and they just don’t."

So, friendly reminder for anyone out there who may have slipped into a coma and forgotten for a second: everyone is terrible, even the people you love. Probably especially them. It's like the song goes: