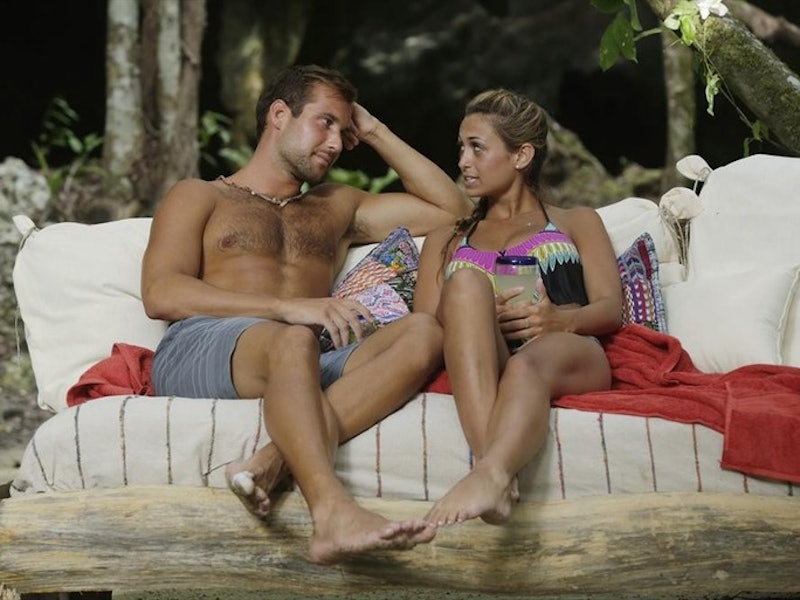 Is nothing sacred anymore? Have we come this far in society that reality television — which we already know lacks "reality" — fakes an entire wedding? According to TMZ, that's the case with Bachelor in Paradise (not) married couple Lacy and Marcus, who (didn't) say "I do," on the Season 2 premiere of the Bachelor Nation spinoff. In the report, TMZ says that these two lovebirds are allegedly not married ("the couple doesn't have a marriage license in either Mexico or the U.S." TMZ's source says), so cue the revolts and protests. If the Bachelor alums didn't get married in paradise, when are Marcus and Lacy going to actually get married? Are Marcus and Lacy even engaged? Are their names really Marcus and Lacy? I don't know what to believe anymore.

If Marcus and Lacy's wedding on Bachelor in Paradise was not real, and they are not legally bound as man and wife, what's the plan? Huh, you guys? I'm talking to you, Marcus and Lacy. Neither Marcus nor Lacy have spoken out about their fraud of a wedding, so who knows if they know we know, you know? I'm hoping that these two are maybe planning a more private and personal wedding to celebrate their love soon, because I cannot lose faith in yet another Bachelor Nation couple. I'm still not completely over Andi and Josh — and I haven't even started processing Chris and Whitney.

Then again, I guess all of the signs were there to point us in the direction of a phony wedding.

Chris Officiated & Something Was Missing

It Was During The Bachelor In Paradise Premiere

Red flag number one. This was all a ploy to get us to tune in, wasn't it?

Lacy Has A Perfume Coming Out

There Was Very Little Family There

I get that destination weddings are expensive, but you'd think ABC would spring for a few more family members to come join in on this amazing day.

They Just Walked Away After

There was no reception, no dancing, no drinking — wait, there was drinking, but not in celebration for the happy couple. Did Lacy and Marcus just say "Peace out, that was fun! Let's do it again sometime," and leave their wedding ceremony like that?

I don't really care if Marcus and Lacy get married on TV, I just want them to get married. So with ABC involved or not, let's hope it happens.