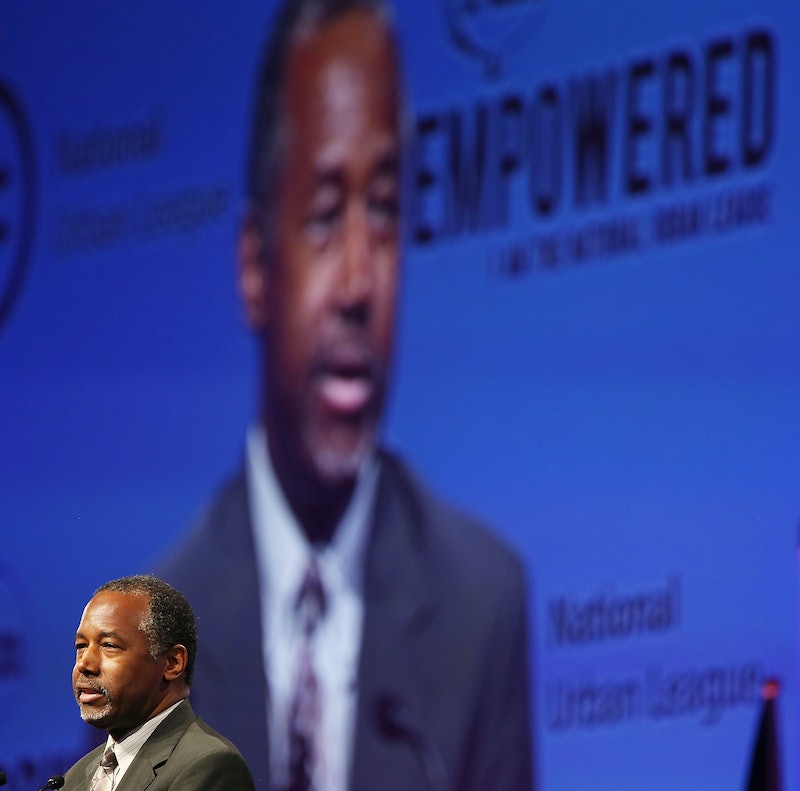 With the exceptionally crowded Republican presidential playing field in the race for 2016, it's hard to keep track of all the politicians who are vying for our country's top office. Especially when several of the candidates aren't really politicians. So, who is Ben Carson? He's one of the Republican candidates who does not have a political background, but he's still doing quite well in the polls (on Tuesday, The New York Times estimated that Carson ranks fifth in the polls, behind Mike Huckabee in fourth place). His ranking means that Carson will be taking part in the first Republican presidential debate for 2016, which is airing Thursday evening on Fox News. Hearing his thoughts in the debate will certainly help shape Carson's image as a political figure.

Carson's professional background is in medicine, in which he had a very successful career as a pediatric surgeon. He graduated from Yale in 1973, after which he attended medical school at the University of Michigan, where he specialized in neurosurgery. Carson did his medical residency at Johns Hopkins University. He gained acclaim for his attempts to separate conjoined twins on several occasions, in places such as South Africa and Iran. Many of the surgeries were ultimately unsuccessful, but Carson achieved several medical breakthroughs in his career, including imaging that allowed for his team in the second conjoined twins case to perform a virtual surgery before operating on the twins. He also is the recipient of more than 50 honorary doctorates.

I've spent so many nights in the operating room, all night long, working, toiling so hard to save one of those lives, and you know one of the most wonderful aspects of life is later on you can see that same little baby as a 25- or 30-year-old who has their own little baby, and yet there was somebody at some point saying that it was just a clump of cells that didn't mean anything.

It will be interesting to see how Carson officially establishes himself in the political arena in the debate on Thursday night. He's been vocal about the issues, but hasn't yet had to play politics with veterans who have been in office for years. He certainly has the views to appeal to a very conservative base of Republican voters, but whether or not he has the chops to make it in Washington remains to be seen.