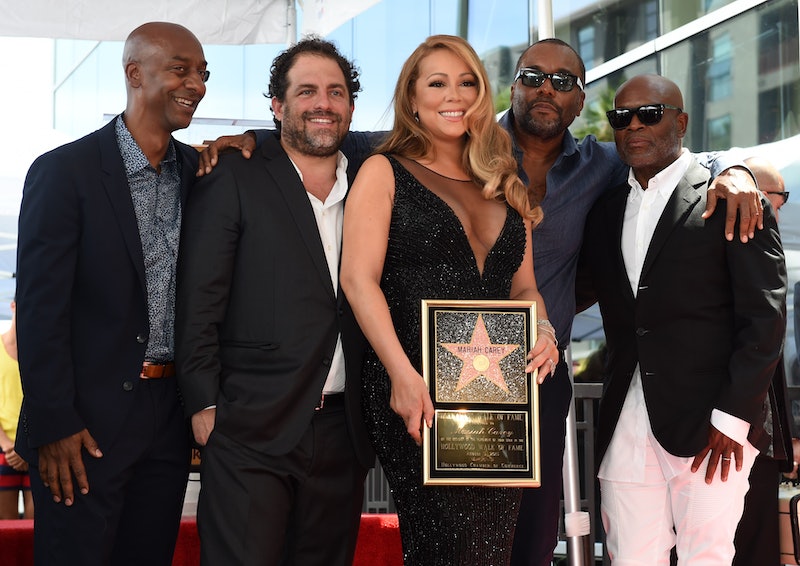 Dears Lambs, butterfly enthusiasts, charm bracelet lovers and elusive ones — it's time to unite and celebrate: Mariah Carey received her Hollywood Walk of Fame star on Hollywood Boulevard. If it wasn't already obvious, Mimi's latest accolade officially elevates her status as a trend-setting music diva to the next stratospheric level. On Thursday, Carey became celeb number 2,556 to receive the coveted star in a fan-filled sidewalk ceremony. Immediately afterwards, she tweeted a heartfelt message of gratitude to her supporters. "They just shut down Hollywood Boulevard because you all came out today! Thank you #lambs #lambily!! #hollywoodwalkoffame," the singer wrote.

But of course, Mariah! Anything less would be uncivilized and certainly not fit for a queen of your musical stature... which brings me to my point: Why didn't Carey receive a Walk of Fame star sooner?!

Now, before anyone gets all defensive and tries to destroy me by way of a piercing whistle register note, hear me out. I'm excited about Carey's star, but the question actually has an interesting answer. As it turns out, Carey's been eligible for a star since 2007, but according to Time, her management team wanted to wait because apparently, timing is everything. What better moment to officially acknowledge her superstardom than after her Las Vegas residency?

Well, I guess better late than never — but here’s why this should've been done, um, sooner than eight years after Mimi’s eligibility.

She Had The Best Holiday Song Of All Time

C'mon, don't tell me that hearing "All I Want For Christmas Is You" on repeat doesn't get your Christmas spirit going every year — because that's just preposterous.

She Had An Album Full Of Number Ones

She's Inspired Other Divas In The Making

In this case, I mean diva in a good way. You know, Ariana Grande is basically a mini Mariah!

Celebs Who Hit It Big After Mimi Already Have Stars

I hate to name names, but some other divas for whom Carey paved the way already have a star on the Walk of Fame.

No One's Making A Big Deal Out Of Her Empire Role

Yes, you read that correctly. During the ceremony, Lee Daniels casually announced that Carey will star on Empire . When you become so famous that you can't even be bothered with a press release, you should've had a star a long time ago.

She Had The Best Musical Comeback Of All Time

Just when everyone counted her out, she blew us all away with The Emancipation of Mimi.

So glad to finally say this: Congrats, Mariah!