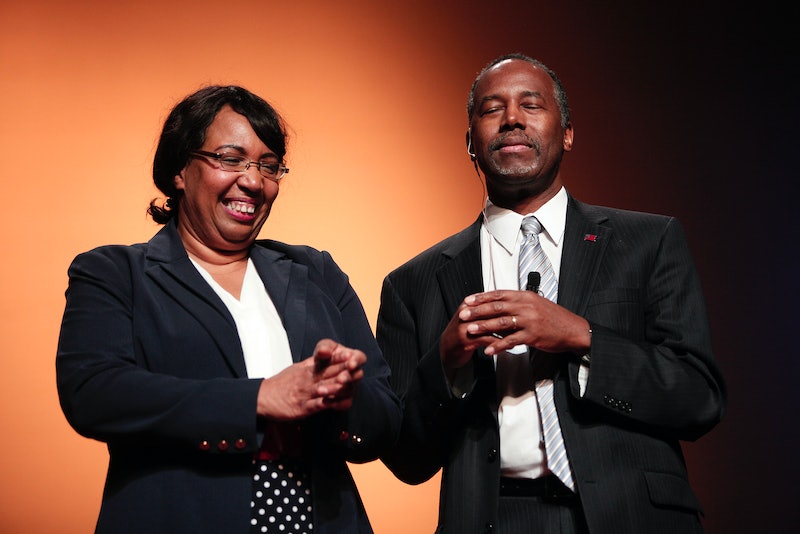 Front-runner Donald Trump is not the only Republican presidential candidate with no political experience; the same can be said of neurosurgeon Ben Carson. And while Trump may have had the most-quoted campaign announcement speech, when Carson announced he was throwing his hat into the ring, his wife Lacena "Candy" Carson, an accomplished violinist, played the national anthem at his kickoff event. So, who is Candy Carson?

Formerly known as Candy Rustin, she grew up in Detroit just like her husband, but the couple did not meet until they were both students at Yale University. Her mother was a church organist and urged her children to learn to play musical instruments. Candy and Ben married in 1975 and have three sons, Murray, Benjamin, Jr., and Rhoeyce. Ben often tells a story about how he knew they were destined to be together, following what could have been a serious car wreck during which he fell asleep behind the wheel while Candy slept in the passenger seat.

I saw all these scenes from my life and I thought, "I'm gonna die." And it just stopped on the shoulder, just in time before an 18-wheeler barreled by. And Candy awakened and said, "What happened?" ... I explained what happened, and we said, "You know what? God spared our lives because he wants us to do something."

Candy was a triple-major at Yale, studying music, medicine, and psychology and also holds an MBA. In addition to keeping her musical career alive in the Baltimore area where the couple lives, she works as a real estate agent. Candy cofounded, along with her husband, the Carson Scholars Fund, established in 1994 to help provide scholarships for college students who do community service work. According to CBS News, the Carson Scholars Fund gives out more than 500 awards annually.

Candy didn't want her husband to run for president at first, but apparently changed her mind when the couple's grandchildren were born, saying she was concerned about their futures. But it looks like Candy is now totally on board with her husband's campaign; she even let him get away with celebrating their 40th wedding anniversary in July with a campaign stop in New Hampshire. Candidates' spouses can help make or break a person's campaign, and Candy looks like she'd be a great advocate for her husband.