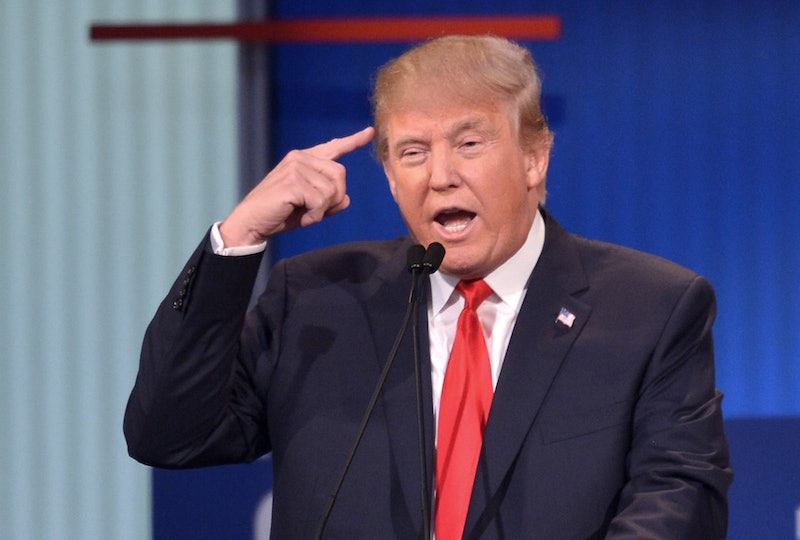 Finally, the time has come for the entire reason we tuned in Thursday — to hear the worst quotes of the GOP debate. With 10 unique candidates onstage vying for the spotlight, there were bound to be some questionable comments made during the first official Republican debate of the presidential election. Especially considering that Donald Trump, Republican firebrand, is leading in the polls.

So far, the entire campaign cycle leading up to the event has felt like the candidates were in training for this night, to see who could get the most outrageous soundbite of the evening. Most experts were betting on Trump, who has waged a personal war on immigrants and Mexico, and has also turned his ire on basically every other candidate in the field, and even those outside it. Neither John McCain or fellow candidate Lindsey Graham were unable to escape verbal lashing at the hands of Trump.

Mike Huckabee has also been preparing for the night, most notably with his comment that the Iran nuclear deal was the equivalent of "marching [Israel] to the door of the oven." Yes, that is a Holocaust reference. And although the worst debate statements will likely never touch the beauty of Trump's Twitter account, some of these quotes came pretty close.

#1 "What I say — and oftentimes it's fun, it's kidding, we have a good time. What I say is what I say. And honestly, Megyn, if you don't like it, I'm sorry, I've been nice to you, though frankly I could probably maybe not be baesd on the way you've treated me."

Megyn Kelly asked Donald Trump about his previous degrading remarks about women, and how he would counter the charge that he is part of the war on women. So he obviously responded by insulting and threatening her. Great plan.

This was Trump's response when Kelly told the candidate that he had called women "fat pigs, dogs, slobs, and disgusting animals." The crowd behind Kelly laughed.

#3 "I think we should invoke the fifth and fourteenth amendments to the constitution... We continue to ignore the personhood of the babies' rights for protection and due process under the law."

Governor Mike Huckabee thought that restricting abortion access is not bold enough. According to Huckabee, since we "now know that a baby is alive at conception," fetuses should be allowed due process protection under the Constitution. No word on if the babies need to retain lawyers first.

#4 "If it weren't for me, you no one would even be talking about illegal immigration."

In case you missed it, Trump was the first politician ever to realize that the current immigration system is less than ideal. After this statement, Trump paused. We can only assume he was waiting for the other candidates to applaud.

#5 "The purpose of the military is to kill people and break things."

According to Huckabee, the goal of the military is not to be a "social experiment." Which was his answer when asked about whether transgender individuals should be allowed to serve in the military.

#6 "The money paid around consumption is paid by everybody — including illegals, prostitutes, pimps and drug dealers."

Huckabee may have become the first presidential candidate to ever talk about prostitutes and pumps on a national stage, no less while discussing his tax plan. Currently, Huckabee counts illegals, prostitutes, pimps, and drug dealers as individuals who are "freeloading off the system." But under his new tax plan, they will be required to pay taxes as well.

#7 Basically Everything Said About Planned Parenthood And Abortion

Marco Rubio never considered that aborted fetuses have mothers, and had to make it clear that his pro-life stance was even more conservative than Kelly had indicated. Walker never answered whether he thought women should die rather than have abortions if their life were in danger. And Huckabee is advocating for repealing all abortion access.