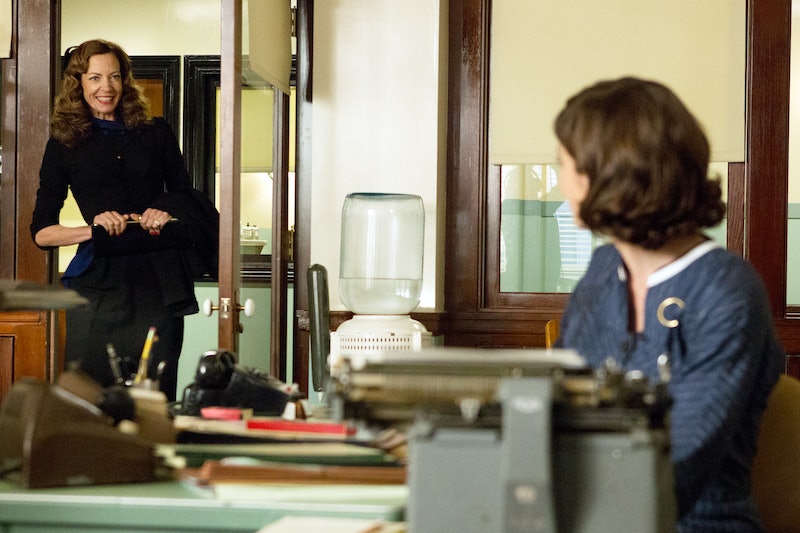 Allison Janney has never been known as an acting slouch: whether it's pratfalling on CBS' Mom or doing The Jackal as C.J. Cregg on The West Wing, her prowess and general fabulousness as a pretender-for-hire has never been questioned. With good reason: she has proven herself to be a wonderful addition to any series she find her way into: including Showtime's Masters of Sex, also known as the greatest new show of the season. Her guest-starring turn as Margaret Scully, wife to provost of Washington University, St. Louis (who also — spoiler alert! — just so happens to be a very closeted gay man in the 1950s), has been nothing short of illuminating, all-but guaranteeing her a spot in the upcoming Emmy Awards race.

So when we were reading her recent interview with Vulture and made the horrific discovery that hers is not a return we're guaranteed, well, panic struck. Wh...what? How?! Why? Now?! Sure, there are still two more episodes to go before the first season ends (and plenty can happen in an episode or two), but barring any sort of crazy death, we can't fathom a reason why Margaret Scully shouldn't be back in the game, to some degree.

Masters and Johnson are both scientists, and a curious sort at that. Both have a sort of reserved sense of what it means to be objective and emotions rarely come to the surface. They hold their cards too close to the vest for that. Margaret Scully is the person through which we see how these changing times affect those around them. She's the reaction, not the action — and she's brilliant at it to boot.

Even though she clings so dearly to the ways of the world ("you have to make them fall in love with you," is her advice to young daughter Vivian about men and marriage), she's like the snowflake that starts an avalanche. We see this in her weekly bridge games with her other married friends. They sit so high atop their judgemental mountain while Margaret floats in the air around them, observing and taking it all in — considering everything these women say and do quite carefully — and then modifying her behavior as such. Following the realization that her husband is gay, though, seems to be preparing Margaret for landing on what sort of person she wants to be, and that's an avalanche worth seeing.

She Has Quiet Brilliance

While so many of the other characters on the show are brash and vocal about their own brilliance and place in the game, Margaret Scully is quietly captivating in her endearing modesty. Upon realizing she may have never had an orgasm, she's quick to quip, "Well, I'm a fast learner. I taught myself Italian," which is the sort of heartbreaking honesty you want. And it also shows that the writers love writing for her character, so why not keep her on board?

She's So Great to Watch

I mean, look at this GIF. Margaret Scully reaction shots are basically the emotional equivalent of an adrenaline shot:

She'd Be a Perfect [SPOILER]

Now, for those of you not well-versed in the world of Masters and Johnson, there is plenty that's about to change for the doctors and this study — including an addition of newer methods and treatments for matters of sexual inadequacy. (Stop reading now if you don't want any spoilers) One of those methods is sensate therapy, where a sex therapist (think Helen Hunt's character in The Sessions ) guides single people or couples into a better understanding of yourself and your partner's sexual needs.

Discussing sexuality includes a lack of sex, and since this show is all about having a smart discussion on sex and sexuality, the ramifications of her time in a loveless marriage would give her a keen insight into what these couples are all dealing with. Wouldn't Margaret Scully, fresh off her divorce and with a new zest for life, make a great sensate therapist to join the Masters and Johnson Institute after it (again, spoiler alert!) departs the hallowed halls of Washington University? The ultimate product of her time, done good.

More like this
The Magic Is Over For Charmed
By Kadin Burnett
A New Season Of The Midwich Cuckoos Could Be Coming “To A Town Near You”
By El Hunt
The ‘Love, Victor’ Showrunner Gave Fans Hope For A Possible Spinoff
By Brad Witter
Peaky Blinders Won’t Return For Season 7 — But A Movie Is In The Works
By Brad Witter
Get Even More From Bustle — Sign Up For The Newsletter