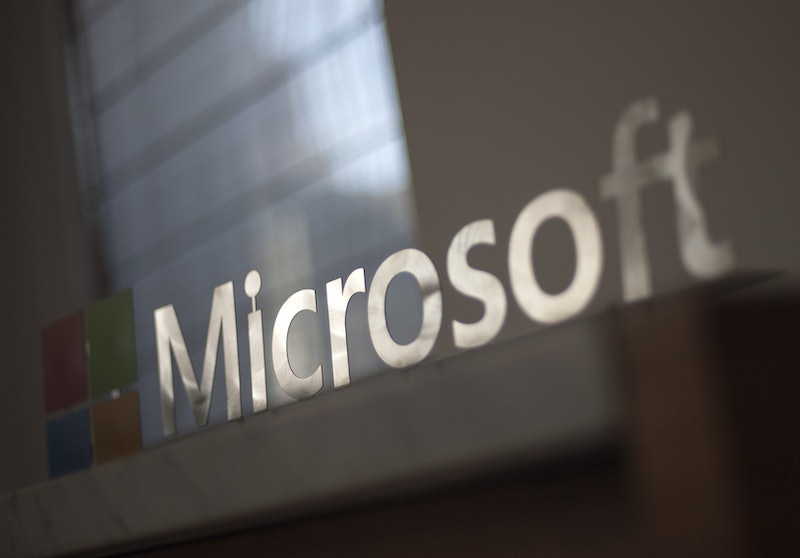 After Netflix broke the news that it will be granting unlimited maternity and paternity leave on Tuesday, it seems that another major company has been inspired to do the same. (Well, kinda.) On Wednesday, Microsoft announced its own new and improved maternity leave policy. And while it definitely doesn't come close to being as awesome as Netflix's deal, it is a vast improvement on what was offered before. It also joins a handful of other big companies that are paving the way for better leave policies for moms and dads — something more U.S. businesses need to get on board with.

Microsoft's Executive Vice President, Human Resources, Kathleen Hogan, announced the new maternity policy on the company blog, in a post titled, "The employee experience at Microsoft: Aligning our benefits to our culture." Hogan looped the updated leave policy in with two other big benefit enhancements — 401k changes and holiday vacation days. But of course, the improvements to parental leave are what really has everyone excited this week.

Today we provide eight weeks of fully paid maternity disability leave for new mothers, plus 12 weeks of Parental Leave for all parents of new children, of which four are paid and eight unpaid. For these parents to bring their best every day, they need time to take care of themselves and their family. In recognition of this, we are making some significant enhancements to our Parental Leave practices, effective Nov. 1, 2015.

Specifically, we’re enhancing our paid Parental Leave to 12 weeks, paid at 100 percent, for all mothers and fathers of new children. For birth mothers, this is in addition to the eight weeks of maternity disability leave they currently receive, paid at 100 percent, enabling them to now take a total of 20 weeks of fully paid leave if they choose.

Hogan also noted that birth mothers will be allowed to take two weeks of short-term disability leave prior to giving birth, and there will be enhanced flexibility when it comes to parents taking their parental leave. (In other words, parents can take their 12-week leave all at once, or in increments if need be.)

Microsoft isn't the only big player in Silicon Valley to step up its parental leave game in recent years, though. Here are five other companies that are leading the charge when it comes to improving policies for new moms and dads.

According to Business Insider, new parents who work for Facebook are eligible for 17 weeks of paid parental leave. Just like with Netflix and Microsoft's policies, these can be used all at once or spread out over the year. And because Instagram falls under the FB umbrella, Instagram employees get the same sweet deal.

Birth mothers who work at Twitter are able to take up to 20 weeks of paid leave. And while dads and other new parents are offered less time off than birth moms, they do get 10 weeks of "bonding time," according to The Atlantic.

Reddit's parental leave policy is also pretty noteworthy: New parents can opt for 16 weeks of paid leave during the first year — and that goes for both adoptive and birth parents. There is one caveat, however: The time off has to be taken in at least two-week intervals. (But I'm guessing that's not a problem for most new parents.)

As if we didn't already know that working at Google was awesome, there's this: Their leave policy includes 18 weeks of fully-paid leave for birth mothers, and 12 weeks for primary caregivers. (Other caregivers can take seven.) One more bonus? They also get stock vesting and benefits during this period.

Yahoo's policy grants up to eight weeks paid leave for anyone with a new child. Birth mothers do get a little extra, though, with the option of tacking on an additional eight weeks of paid leave. They also get $500 to spend on essentials, such as groceries, diapers ... you name it.

Still, while all of this sounds super awesome, it bears mentioning that newer companies (and specifically, tech companies) are typically kinder to parents when it comes to maternity and paternity leave policies. The truth is that U.S. companies still majorly lag behind the rest of the world when it comes to the flexibility we afford new parents. It's a fact President Obama was quick to point out in his State of the Union speech last January, when he noted that America is the only wealthy nation that doesn't guarantee paid leave. But if Netflix has proved anything this week, it's this: Waiting around for the government to mandate a federal parental leave policy could take forever. Wouldn't it be amazing if companies could work towards improving their policies internally, based on what works for them and their employees?