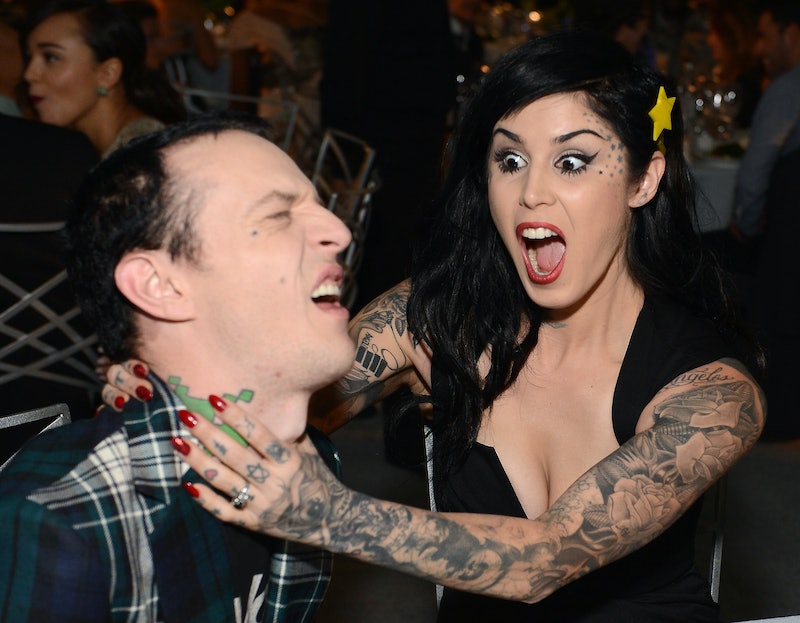 UPDATE: Deadmau5 has responded to Kat Von D's cheating allegations on his Facebook page. Posted the musician: "Kat and I split in November and I moved back home to Toronto. During this time, while we were broken up, I did have relations with another woman. Following that, Kat and I reconciled and I acknowledged being intimate with another person while we were estranged.

"We did move past those issues, and I proposed to Kat in mid-December. At the end of June, it was clear that the relationship was not working and we mutually ended the engagement. I was not, at any point, unfaithful to Kat during our time together.

"I don't wish to go tit for tat with these kinds of pronouncements and don't expect to comment further, but I do believe that those who have expressed concern deserve a more complete understanding of what transpired."

EARLIER: Kat Von D and Deadmau5 got engaged on Twitter, so it only makes sense that they would announce their break-up on Twitter. The LA Ink star aired her dirty laundry Wednesday when she posted the following tweets:

Those are lofty allegations to throw at Deadmau5, who began dating Von D in late 2012. But the split should come as no surprise — the couple, who got engaged just three months after dating in late 2012, split briefly just one month before Deadmau5 proposed on Twitter.

And this is hardly the first time Von D took to social media to accuse a significant other of wrongdoing. The reality star, who was previously engaged to Jesse James, accused her ex of cheating in late 2011:

At least she has 1.4 million people to vent to?