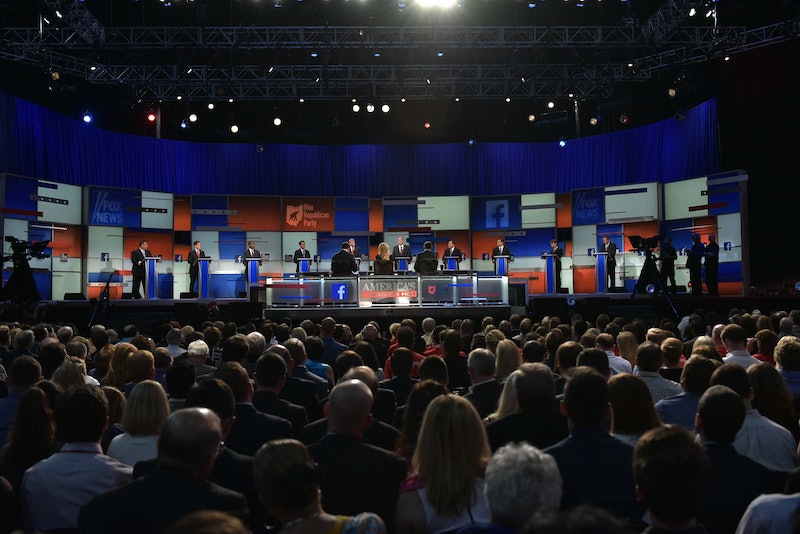 If you blinked, you almost certainly missed it. The first primetime Republican presidential debate offered the ten leading candidates an opportunity to finally speak up about race relations in America. But, in Thursday night's debate, the single Black Lives Matter debate question and Straight Outta Compton trailer played back to back, creating an awkward moment about race relations in the country and the growing national debate on police brutality against the black community.

Whether the GOP candidates would talk about race was one of the major questions of the evening. According to data released by Facebook this week, race is among the major issues discussed on the social media site in recent months, outpacing chatter about immigration, the economy, and LGBT rights. But, rather than asking each of the candidates to weigh in on the issue, Megyn Kelly lobbed a single question to Wisconsin Gov. Scott Walker — then the station cut to a trailer for Straight Outta Compton, a film about the rise of gangsta rap and the influence of rap group N.W.A. on changing social perceptions of the black community. Yes, it was awkward.

Here's the super-quick exchange between Kelly and Walker:

Kelly: Many in the Black Lives Matter movement — and beyond —believe that overly-aggressive police officers targeting young African Americans is the civil rights issue of our time. Do you agree? If so, how do you plan to address it? If not, why not?Walker: Well I think the most important thing we can do when it comes to policing [...] it's about training. It's about making sure that law enforcement professionals — not only on the way into their positions, but all through their time — have the proper training, particularly when it comes to use of force. [...] And for the very few that don't, that there are consequences that show that we treat everyone the same here in America.

Right after that answer, Fox cut to a commercial for the upcoming N.W.A. biopic Straight Outta Compton. The movie chronicles the rise of the legendary rap group and the birth of gangsta rap — a music genre that Fox News commentators have often blamed for poor relations between police and minority communities.

The short shrift and ill timing wasn't lost on Twitter, either. Here are some reactions that Twitter users had to the abrupt exchange.

Sure, the debaters don't really have control over what ads air during what commercial block, but given the high-profile deaths of Sandra Bland, Eric Garner, Michael Brown, and countless others, more time should have been set aside for the social movement and the country's police brutality problem. A movie trailer shouldn't be the biggest commentary on race relations to come out of a political conversation, especially when the people talking are trying to become the next president of the United States.