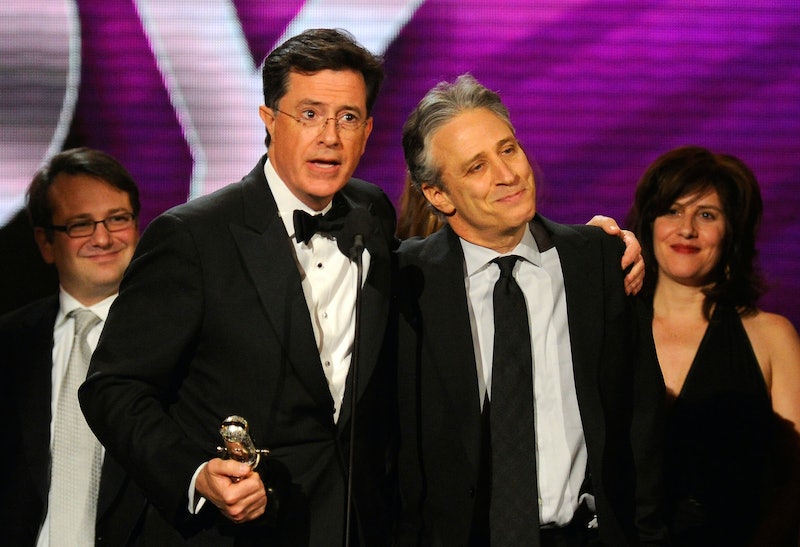 Many familiar faces came by to bid Jon Stewart farewell during his final episode of The Daily Show on Thursday night. But none was more touching — and delightfully nerdy — than a visit from former correspondent Stephen Colbert, who will take over CBS' The Late Show next month. Colbert said goodbye to Stewart on The Daily Show in the best way he knows how: with an extended Lord of the Rings metaphor, along with lots of laughs and touching words. "You were infuriatingly good at your job," Colbert told his former boss and colleague. "I'd have turd lung if it hadn't been for you."

The Daily Show and Stewart helped launched the career of Colbert, who went on to host the very popular The Colbert Report and will soon take over legendary comedian David Letterman's late-night throne on CBS. Of course, Colbert stopped by Jon's desk one last time to say farewell using his famous knowledge of The Lord of the Rings. At first, Stewart though Colbert was referencing Cheers, when Colbert called himself Sam ("Am I Diane?" asked Stewart). Colbert corrected him: "No Jon, you are Frodo...One of us is adult sized and doesn't have hairy toes... Like Frodo, you are leaving us on a voyage to the undying lands... for 16 years you and your basic cable fellowship of funny cluthed that ring and trudged up the steep steps of mount doom..."

Though lots more LOTR references followed, including Colbert clarifying that, "The ring of power is a metaphor for power," he also had other beautiful things to say, telling Stewart about his impact on the media and even bringing the host to tears. Because it's not all about power. What's most important here is that two old friends and coworkers bonded together one last time to say goodbye to the desk, stage, and show that launched their careers from basic cable comedians to iconic political comedy voices. And it was just as epic as I expected it would be. Frodo would be proud.