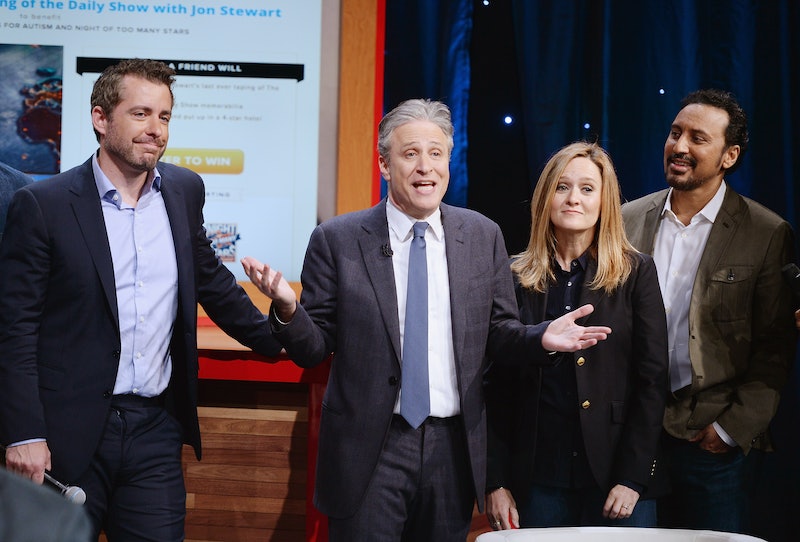 Jon Stewart kicked off his farewell episode of The Daily Show by reminding us that we'll all survive and stating the show would stick to its usual format. He then cut to "Ohio," where current and past Daily Show correspondents told Stewart they were there to help cover the Republican debate. As we expected, they didn't end up devoting much time to Jeb Bush and Donald Trump, and Samantha Bee quickly threatened to leave when she realized Huckabee was the only candidate still up for grabs. (Wise woman.)

As the opening continued, former correspondents kept on appearing — there were many familiar faces and it served as reminder of the launching pad The Daily Show has been for so many comedians and entertainers. None of us were surprised to see Daily Show staples like John Oliver, Ed Helms, and Steve Carell, but there were a few in there who made me do a double take. Remember when Olaf (uh, I mean Josh Gad) was a guest correspondent from 2009 to 2011 prior to his days of singing "In Summer"? Other highlights were Olivia Munn, who has gone the Hollywood film route, and Matt Walsh, who now plays the White House Press Secretary on Veep.

It was Stephen Colbert who made Jon Stewart tear up even earlier in the night than I expected. Colbert reminded Stewart that he always told his staff that they owe him nothing. "You were wrong. We do owe you," he said, going on to highlight that Stewart taught by example by treating everyone with respect and being "infuriatingly good at your job". Leave it to Colbert to put it in the best way possible (oh, and he'd be mining turds right now if it weren't for Stewart, but NBD).

Colbert's words were touching, but they were no surprise. Stewart has been a huge influence on many, and that's why I was thrilled but not at all shocked to see his former staff fly in from all over the country for the final show.