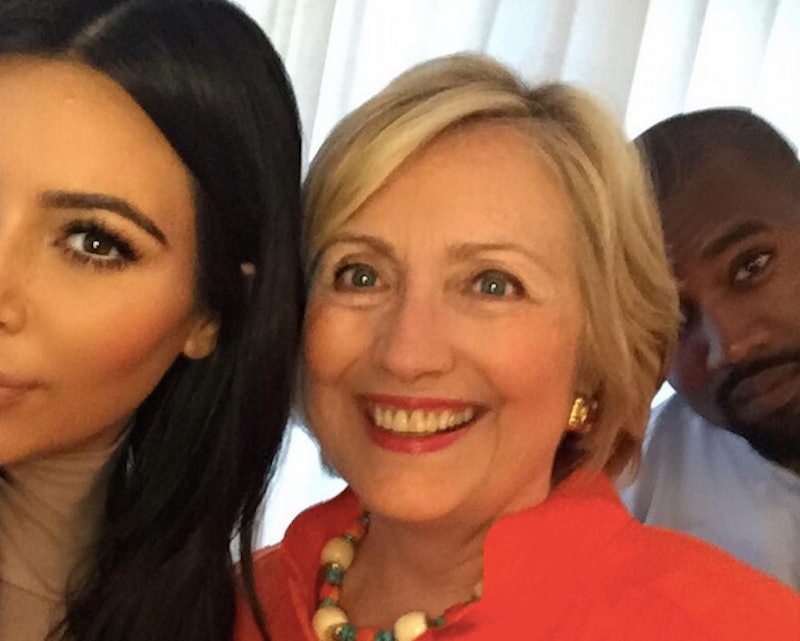 You can't deny that Kim Kardashian is a powerful, powerful woman. Her iPhone game broke records, her reality show is undeniably addictive, and she's frequently at the top of "most Googled" lists. You know her name. I bet you even know her sisters' names. And you sure as hell know her husband's name. Point being, Kim K is prolific. While a couple million people watched the first Republican debate on Fox News, 41.7 million are watching Kim Kardashian's Instagram account. Which is why Kim K's selfie with Hillary Clinton and Kanye West is the smartest thing Hillary could've done on this, the night when all eyes are supposed to be on her competition.

Earlier in the evening, Kardashian teased that she was on her way to meet the next president, and lo and behold, a few hours later, up pops a selfie with Clinton. And Kanye. Can we just talk about Kanye for a second. I dare say he's smizing. He's about a quarter of the way to a smile, which, guys, that's huge. Do you think Clinton tickled him in the ribs? Called him a goofball? Asked him his thoughts on Drake and Meek? God, a girl can dream.

Back to Clinton. Throughout the two-hour debate, she and her team were essentially trolling the Republican candidates, tweeting her support for Planned Parenthood. And, knowing that we were all sick of hearing the GOP ramble on about abortion, she felt our pain, then asked for our money. Then she had to go and do something like this, and totally redeem herself. A selfie of this proportions can break the Internet — and no one's even naked!

If there's one way to shift a conversation, to shift a national conversation, you get the Kardashians involved. Anything they do becomes a headline instantly (case in point). Clinton once joked that if she wanted to knock a story off the front page, she'd just get a haircut. Well now that it's 2015 and kids don't even know what the front page of a newspa — newspap? how you say? — newspaper looks like, Clinton went to the biggest media outlet she could find. Et voilá, one epic selfie.