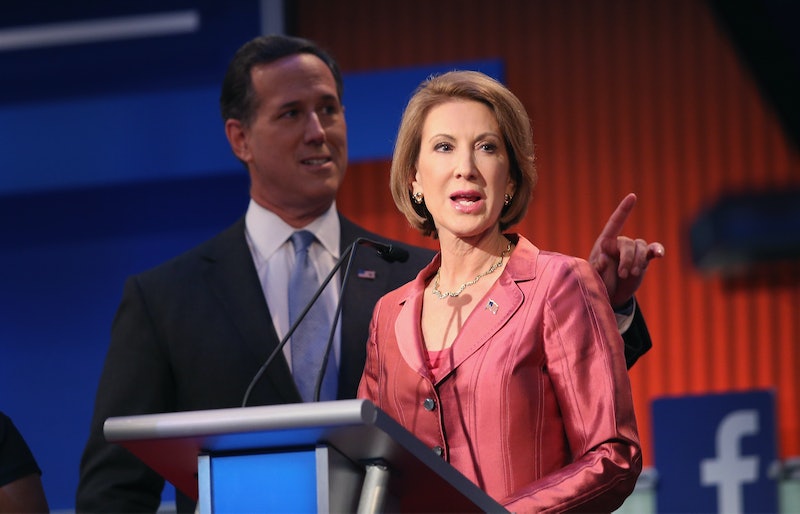 Carly Fiorina entered the "Happy Hour" GOP debate at the bottom of the 17-person pack, but according to experts and viewers alike, the former HP CEO came out on top with her witty quips and smart take on important issues such as Iran, immigration, and bipartisan politics. Things couldn't have gone better for the Republican candidate, especially since she was in desperate need of a campaign boost. Even though her chances of winning the coveted Republican nom are pretty moot, here's why Fiorina is now the one to watch.

As one of many in a crowded Republican field, Fiorina has some serious obstacles she needs to overcome, namely a lack of name recognition and donor dollars. According to a Reuters poll, Fiorina had less than 1 percent of the GOP vote, particularly given that she lacked the political resume held by many of her competitors, and CNN reported she's only raised $1.4 million so far (compare that to Bush's hundreds of millions or Trump's self-financed billions.) These are truths that aren't lost on Fiorina. In an post-debate interview with CNN, she acknowledged how crucial the debate was for her fledgling campaign.

"I went into this knowing that only 40 percent of Republicans even know who I am. So I had the lowest name ID of anyone in the field. It shows in national polling and so this was a chance for people who had never seen me before to see me."

But things are likely to change for the better after Thursday, especially when you consider she was the most Googled candidate in 48 states. What has made Trump so successful early on in the race is his ability to say what's on his mind without the reserve of a seasoned politician. Fiorina, who has never held elected office, has that same opportunity and is poised to offer a much needed outsider point-of-view, something that she made clear during her time on stage.

"We need a nominee who is going to throw every punch, not pull punches, and someone who cannot stumble before he even gets in the ring. I am not a member of the political class. I am a true conservative who can win this job."

For Fiorina to capitalize on her newfound fame with Republican voters, she'll need to insert herself into the national conversation with the same tact she showed during the GOP forum. Sure, we're still seven months out from the first caucus, and she'll have to make some serious moves in order to be taken seriously as a top contender. But her quick rise could force other candidates, including those on the Democratic side, to readjust their platforms. Just as Vermont Sen. Bernie Sanders' entrance threw Hillary Clinton's sure path to the Democratic nomination off course, Fiorina could disrupt the bigwigs at the top of the GOP field.

The reality is Fiorina probably won't win the Republican nomination for president, but she would be an attractive name on the ticket as a potential vice president, especially when you look at the GOP's long-term strategy against its biggest competition: Clinton. As the only other female candidate in the race, Fiorina could threaten Clinton's standing with women. The GOP uppers won't forget Fiorina's powerful performance during the JV showdown, and everyone will be keeping an eye on where she goes from here.