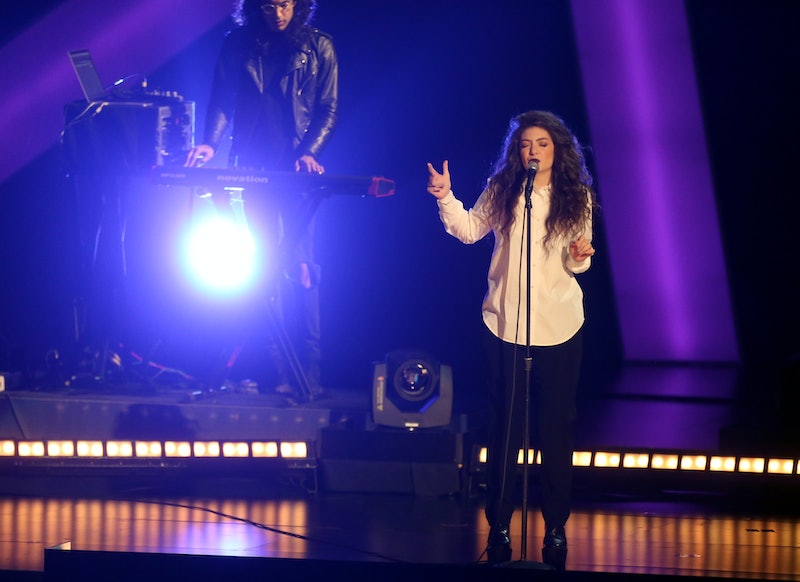 No one will say that Lorde failed at the 2014 Grammys. In one year, she has managed to put out a hit single, cut a killer record, and, on Friday night, perform at the Grammy Nominations Concert in the Nokia Theatre. And, as everyone keeps reminding us, she just turned 17. Since she is new to the Grammy scene, though, it is puzzling that the great Grammy gods have snubbed the "Royals" singer in the Best New Artist category. It seems like a teenager with a chart-topping single would be great candidate. Even her stand-and-deliver performance at the nominations ceremony showcased a fresh new artist on the rise.

But alas, the Kiwi princess of pop will not be this year's Best New Artist. Instead, she was nominated for four other awards, including Song of the Year, Record of the Year, Best Pop Solo Performance, and Best Pop Vocal Album. In each of these categories, she is up against reigning pop royalty like Katy Perry, Daft Punk, Bruno Mars, Pink, and Justin Timberlake. That is a tough group to beat, but based on Lorde's commanding performance at the nominations, she's ready to stand her ground.

Imagine Dragons was similarly left out of the Best New Artist nominees, but they are in the running for Record of the Year and Best Rock Performance. Perhaps both Imagine Dragons and Lorde have made such a splash this year that they already seem experienced, or maybe the Grammy voters didn't want Lorde to take every category. Either way, is there any chance she doesn't walk away with a gold statue come Feb. 9?