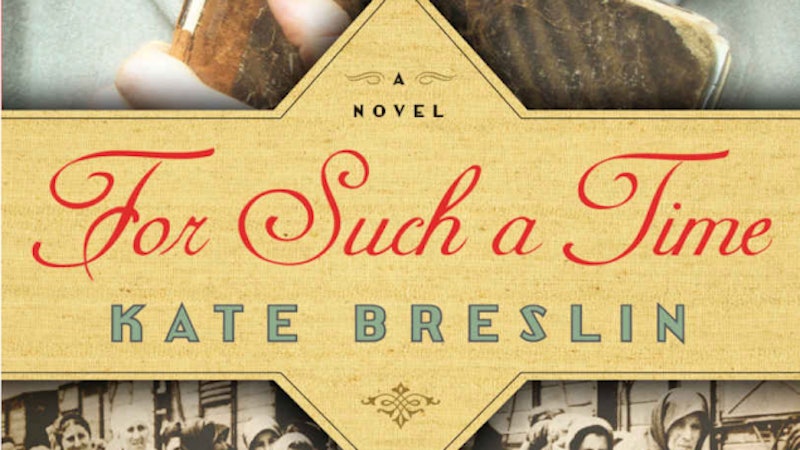 It should come to no surprise that a romance novel centering on a romantic affair between a Nazi officer and his half-Jewish concentration camp prisoner would understandably incite outrage. Kate Breslin's For Such a Time not only does that — but it is also a Christian-centered novel starring a "blonde and blue-eyed Jewess," according to the book's description, that has been accused of cultural appropriation and anti-Antisemitism. The troubling novel jumped into the spotlight recently when it was nominated for two RITAs, the Oscars-level award for the Romance Writers' Association: Best First Book and Best Inspirational Romance. ("Inspirational" here meaning "Christian.") The controversy has fueled larger discussions about racism and appropriation in the romance and larger literary world.

For Such a Time is a retelling of the Book of Esther. If you have already forgot your lessons from church or temple, that's the Old Testament story that essentially forms the celebration of Purim in the Jewish religion. A young girl named Hadassah goes by the name of Esther to become the queen of Persia and stops plans of a genocide against her people by appealing to her husband. In Breslin's romance novel, however, the heroine becomes Hadassah Benjamin who goes by Stella to avoid certain death in a concentration camp after escaping a firing squad. Stella works in SS-Kommandant Colonel Aric von Schmidt's office and, long story short, they fall desperately in love. But in the end, it's not her Jewish faith or her own strength that saves her, it's a "magical" Bible and her conversion to Christianity. Eek.

In the wake of the RITA nominations announcement, Smart Bitches Trashy Books' review of For Such a Time has gone viral. It brings up major issues with Breslin's book, specifically centering around abusive relationships and cultural appropriation. Smart Bitches reviewer Rachel writes:

If you want me to believe that a relationship between the top official at a concentration camp and his prisoner truly is a love story, rather than a story about heinous disparities in power and something like Stockholm Syndrome — well, that would take a lot of convincing.

The reality of Aric’s relationship with Hadassah is that, at all times, he holds her life in his hands — and they both know it. In that context, his repeated expressions of desire for Hadassah and his penchant for grabbing and kissing her aren’t just your standard romance dubious-consent hash, but are an incredible, intolerable abuse of his power.

And in discussing Hadassah's "savior" coming in the form of the New Testament, Rachel is equally disturbed:

**Yes, the Bible, New Testament and all, guides Hadassah and helps her find her faith again. Did I find it troubling that, particularly in a novel about the Holocaust, the specter of conversion to Christianity was so central in ‘saving’ the Jewish heroine? Uh. Yes.

Later, in an open letter on her blog, Smart Bitches' Sarah Wendell described her feeling on For Such a Time's RITA nominations.

The fact that this book was nominated in two categories is deeply hurtful," Wendell wrote, "and I believe creates an environment where writers of faiths other than Christianity, not just Jewish writers, feel unwelcome."

Smart Bitches, Trashy Books inspired many other writers and readers to speak out against the book's nominations. The uproar forced the Romance Writers of America to release a statement on their decision to include Breslin's For Such a Time. Here's a piece of their statement:

The RITA is a peer-reviewed award. There is no vetting of content before a book may be entered. Books are entered, not nominated, and those books are judged by fellow romance authors. The Board believes this is how the contest should be run. RWA does not endorse the content of any book entered in the contest. We do believe, however, that education and conversation are important in dealing with the concerns expressed. To that end, we will open an online forum on the RWA website for members to discuss their concerns. This is not a perfect solution, but we believe open dialogue, not the censorship of content, is the right way to handle the issues expressed.

For Such a Time has certainly opened up a dialogue, and one that desperately needs to be had, about appropriation, racism, and diversity in the publishing industry as a whole. Here's hoping the discussion raised by this problematic novel leads to some changes.