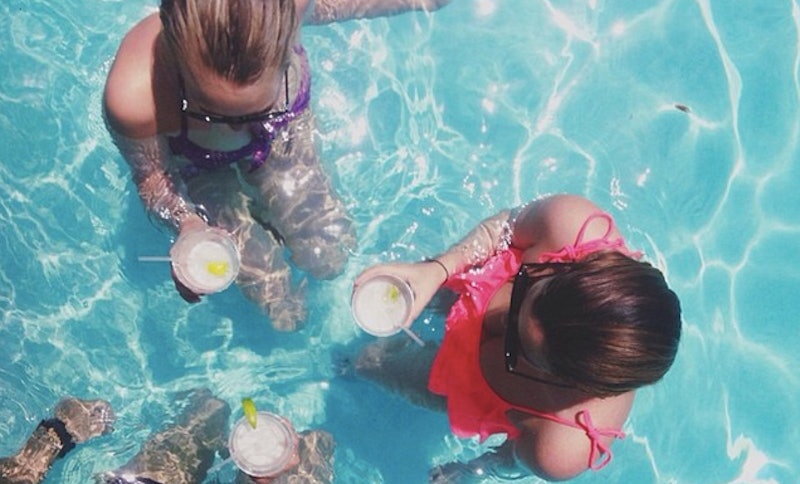 When it comes to health, we usually don't hesitate when it comes to loading up on green smoothies, nutritious salads, and coconut water. But with all that healthy stuff comes balancing it out with our happy hour ritual. So knowing which drinks are going to give you a bad hangover is kind of key when planning a night out, because you probably don't want to skip hitting the bar altogether — and you definitely don't want to end up with a hangover in the morning and be stuck in bed for the day. Though it may seem like having a Fireball shot will have the same effect on you tomorrow as one gin and tonic, you might want to think again. Certain drinks are more likely to give you a hangover than others, especially those high in sugar.

"The severity of your hangover can be based on a lot of different factors such as what you drink, how much you drink, and how healthy your lifestyle is overall," nutritionist Dana Kofsky tells Bustle via email. "Drinks that are more likely to cause hangovers contain high amounts of sugar, mix together multiple kinds of alcohol, and have a high calorie count."

To make sure you don't wake up with a dry mouth and a pounding headache, here are five hangover culprits to avoid, plus better options to replace them with.

"This drink typically contains at least five hard liquors and is topped off with Coke and syrup," says Kofsky. "It’s a sugar-bomb filled with calories!"

Drinking high amounts of alcohol at one time is the ultimate hangover factor, so stick to one drink at a time, paced out, to avoid feeling crappy the following day.

Drink This Instead: Brewed Iced Tea With Liquor

"An alternative to Long Island Iced Tea is to brew fresh iced tea from scratch, add a splash of your favorite hard liquor, and add a lemon wedge," suggests Kofsky.

Not only will you eliminate the severe influx of alcohol all at once into your bloodstream, but you'll be keeping hydrated and getting a boost of antioxidants while you're at it.

I know, I know. Drinking a piña colada can make you feel like you're basking in the sun on an island far, far away. But once the effects wear off, the next day you could be feeling like a tropical storm hit you like a ton of bricks. While consuming "coconut" may seem healthy, most ingredients in a piña colada are either low quality or artificial.

"Many restaurants use low-quality coconut oils that are usually processed by chemical extraction," says Kofsky. "These chemicals leave behind chemical residues which can hydrogenate the oil. Not to mention, this drink is filled with sugar."

Drink This Instead: Light Rum, Coconut Water, and Pineapple Juice

This much more natural alternative will still leave you feeling like you're on vacation without the brutal hangover. The coconut water will keep you hydrated, while the vitamin C in the pineapple juice will give your immune system a boost. Plus, it's always better to choose light drinks over dark, as darker alcohols contain more congeners, a toxic compound that leads to worse hangovers.

"White Russians contain a high amount of caffeine, which will initially stimulate your body to produce adrenaline and dopamine, more than usual," says Kofsky. "This causes you to be in a positive mood and have a boost of energy, but when these chemical levels return to normal, you can experience fading energy and a drop in mood."

Drink This Instead: Vodka, Decaf Coffee, And A Splash Of Milk (Or Coffee Creamer)

By replacing coffee liqueur, which is filled with sugar and caffeine, with decaf coffee, you can still get that latte punch without feeling overstimulated. Vodka is your best bet when it comes to hangovers, as its clear and contains less congeners than other options.

You might think this combo would be a good choice, as it's seemingly straightforward, but rum and cola contain ingredients that will leave you feeling less than pleasant the following day.

If you order diet soda, your drink comes packed with aspartame and chemicals, according to Kofsky.

Drink This Instead: Bacardi On The Rocks With A Dash Of Ginger Beer

Cheap rum is often the sugariest, so order a higher-end, light rum to avoid your bartender pouring you a poor-quality, hangover-inducing drink.

"Hard alcohol on the rocks is always an option, and lighter colored alcohols are always your best bet," says Kofsky.

For a little bit of sweetness, add a small amount of ginger beer, which doesn't contain the chemicals of your standard soda.

"Margaritas are often made with artificial mixes, which also contain an overwhelming amount of sugar and chemicals," says Kofsky.

Since margaritas are so delicious, you tend to drink more of them without realizing how much sugar and alcohol you're consuming at once.

Drink This Instead: Tequila Over Ice With Lime Juice

"A great take on a margarita is tequila and fresh lime juice, with a touch of pure stevia, all on the rocks!" suggests Kofksy. "It's a crisp and refreshing drink, and you won't even realize you're drinking the healthier alternative."

Going out to get drinks with your friend should be a fun occasion no matter what you order, but there's no reason the next day shouldn't be just as fun as well, right?