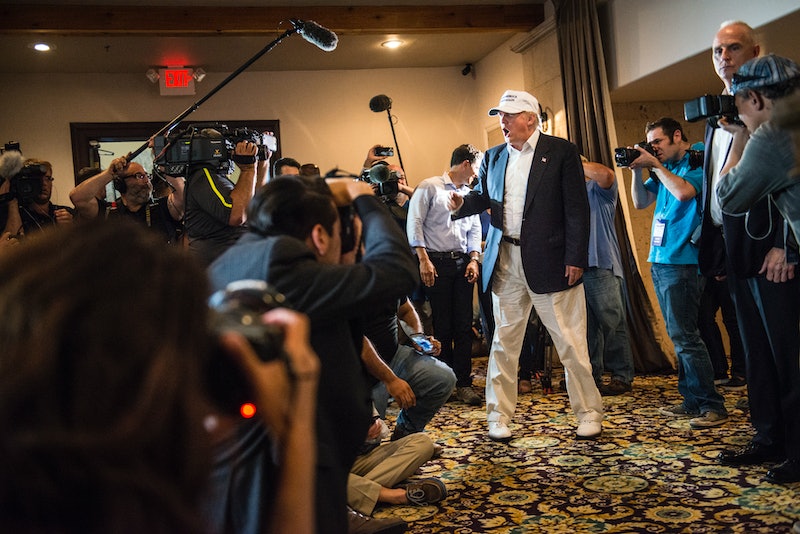 Ezra Klein nailed it when he wrote that GOP frontrunner Donald Trump simply can't be embarrassed. Trump just does not care — he doesn't care about "political correctness," he doesn't care that he's offensive, he doesn't care that many Americans think he's a joke. This was as evident as ever during Thursday night's GOP primary debate. During the debate, Trump called politicians stupid, singled out Rosie O'Donnell with his sexist messaging, refused to pledge not to run as a third-party candidate, and referred to all reporters as dishonest. He was not fazed by Megyn Kelly's efforts to point out his blatant sexism or Bret Baier's questioning of his past political views. So what's next for Trump?

People have been making predictions of the Trump campaign's impending decline for a while now. Media coverage has propelled him to the top of the polls and he has maintained that status by making increasingly inflammatory comments and refusing to apologize for anything. And people can't stop talking about him. So, it was Trump who was center stage at the first GOP debate, and it is Trump who continues to receive an overwhelming amount of coverage. It's fun to make fun of him — The Huffington Post obviously knew that when it relegated Trump coverage to its entertainment section — but at a certain point, we have to ask ourselves why so many people support him, and wait to see whether or not the next round of polls will reveal any dramatic changes in polling numbers.

In the short term, Trump doesn't show any signs of slowing down. For starters, he will be stopping in Michigan on Tuesday, in a county whose last visit from a presidential candidate was back when George H. W. Bush was running for president. But while embarrassing Trump might not be an effective way to stop him, perhaps his own ego is. As Peter Beinart wrote for The Atlantic, Trump spent a lot of Thursday night's debate talking about himself, rather than about the country. He emphasized how rich and successful he is, how people will do anything for him because he's donated money to them, and how he doesn't care about political parties.

By writing this, I am giving Trump more attention — but I'm also trying to draw attention to the fact that at a certain moment, Trump's inexperience in the political sphere will come back to haunt him. He is great at talking about everything he hates and dodging questions — and maybe he's a better politician because of that — but because he has made his campaign about him and him alone, he has no way of explicitly outlining how he will achieve his aims.

For now, we can expect Trump to continue warring with Fox News and Kelly over what he calls the outlet's lack of professionalism during the debate. But the easiest way to stop him in his tracks is by depriving him of the very thing he craves — sensational headlines that he can disparage and large audiences for everything he says. Economist Paul Krugman wrote an op-ed in The New York Times that explores Trump's politics and the hypocrisy of the Republican Party, explaining that it should not surprise anyone how well Trump has been performing. Krugman also offered an important criticism of the GOP: While Republicans have always donned a thin mask of respectability, it is the party's lack of normalcy that attracts much of its voter base in the first place.

Can Mr. Trump actually win the nomination? I have no idea. But even if he is eventually pushed aside, pay no attention to all the analyses you will read declaring a return to normal politics. That’s not going to happen; normal politics left the G.O.P. a long time ago. At most, we'll see a return to normal hypocrisy, the kind that cloaks radical policies and contempt for evidence in conventional-sounding rhetoric. And that won't be an improvement.