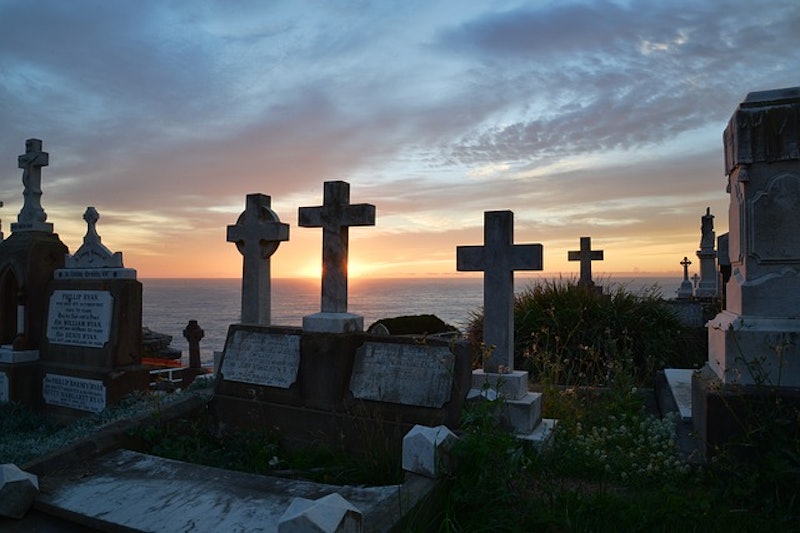 Unless you're a member of the Addams Family, you probably don't get too excited about the idea of a funeral. In fact, you probably hope pretty regularly that you don't have to attend one anytime soon. At their best, funerals are full of awkward air kisses and reminders of your own mortality while you try to be sad at the passing of an old, distant relative. At their worst, funerals are your last, desperate moments with a loved one before facing the reality that you need to, somehow, carry on living without her. Either option is almost guaranteed to include mental and emotional exhaustion and a mini-existential crisis. No one in her right mind would willing surround herself with funerals.

Enter Elizabeth Meyer, who in her early 20s lost her father to cancer. Wanting to give her dead a proper sendoff, she planned a nontraditional funeral for him, forgoing lilies and funeral dirges for her mother's favorite flowers and The Rolling Stones. She was so happy to have planned a funeral she knew her dad would have loved that she decided to get into the funeral business. She began working at Crawford, an elite funeral home for the rich and famous in Manhattan, first as a receptionist and eventually as a funeral planner to the stars.

Meyer's new memoir, Good Mourning, is a hilarious and often poignant look at her time at Crawford and her life in the aftermath of her father's death. Many of her experiences focus on the funny and bizarre: she talks about the time she met Richard Gere at a funeral, had to explain to a family that their loved one was missing a brain, and almost lost a body. But it isn't all fun and games in the death business. Meyer also opens up about losing her father and the devastation of seeing someone you know end up on the mortician's prep table. She talks about trying to become comfortable with the idea of death, and empathizing with the grief of others. And, yeah, her book is also about planning really over-the-top funerals.

Meyer isn't the only person to appreciate a good funeral. History has given us a ton of ridiculous, elaborate, and sometimes even hilarious funerals. Of course, unless she's some kind of funeral-planning Time Lord, Meyer probably didn't have anything to do with these (though I'm not willing to put money on that). But she knows a good funeral when she sees one, and I bet she'd appreciate the creativity of some of these dearly departed.

Rudolph Valentino was a famous movie star and heartthrob who died at 31 in the 1920s. At his funeral, police were called in to keep rioting fans contained, and it was estimated that 100,000 mourners came to say farewell. The best part, though, was that it later came out that Frank E. Campbell, the man who took care of Valentino's funeral, actually paid people to act hysterical and devastated to draw attention to his funeral home. I'm going to guess that Meyer never stooped quite that low.

Meyer believes that a funeral should reflect what a person was like during his or her life. Sometimes that means decorating the funeral home with the deceased's favorite flowers; other times, it means burying them in a giant piano. Jimmy Dean, an actor and country music singer, didn't want to spend eternity underneath some common headstone. Instead, the star was buried in a piano-shaped tomb with the inscription: "Here lies one hell of a man." One hell of a man indeed, Jimmy.

Sometimes, despite the best of intentions, a funeral may not go according to plan. Andrew Jackson, former president of the United States and all around badass, had a pet parrot that ended up outliving him. For some reason, people seemed to think it was a good idea to let the bird attend the funeral. Well, the story goes that the parrot started swearing so loudly that it had to be removed before the funeral could continue. Um, awkward.

Some people want fireworks at the funeral, other people want to be fireworks at their funeral. Thompson, obviously, was in the latter camp. The writer insisted that when he died his ashes should be sent into the sky with a bunch of fireworks. His wishes were granted, and the rest of his service included a gigantic monument featuring a psychedelic peyote button, Bill Murray (and other famous guests), and stuffed peacocks. In other words, it was freakin' awesome.

Mother Teresa would probably be horrified at the excess of some of Meyer's clients, but that doesn't mean that she didn't go out in style in her own way. According to CNN, at her funeral in India "wine for the Eucharist was brought into the hall by a leprosy patient; water by a woman released from prison; bread by a handicapped man." And, despite all the famous and important people who wanted to pay their respects at her funeral, her religious order made sure that at least half of the seats went to those Mother Teresa dedicated her life to helping.