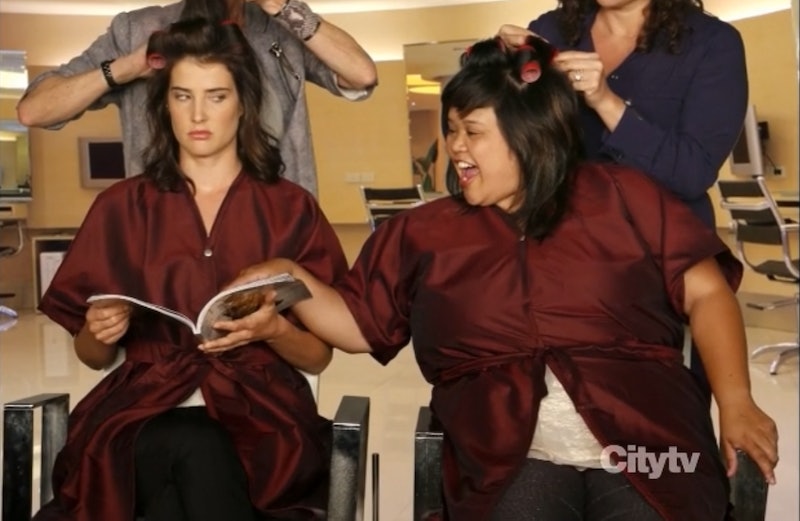 There's no doubt that with the dawn of the digital age also came the dawn of the personal opinion. Or rather, the idea that personal opinions need be publicized, argued, dismantled and sh*t talked at every beck and turn. Yes, there are people who are willfully ignorant, or misinformed, or severely oppressed, or naively tolerant — but it's not your job to hatefully judge them into changing. It's not your job to only love people who are "good enough" by your subjective standard. People are not their beliefs. They are not their thoughts.

I say this confidently because as you would probably not want to be defined by your beliefs and thoughts five years ago, and to truly coexist in this world you must give people the chance to evolve and change, and that does not and will not happen while you're busy determining how worthy they are. It only makes people more defensive of their beliefs, not more open-minded to yours. The reality is that we coexist with people who are projections and deflections and connections to who we really are at our core. To accept people who aren't like you is, ultimately, just to be able to accept yourself.

We're More Alike Than We Think We Are

If viral content (especially identity-based content) can tell us anything, it's that we're more alike than we think we are. There's a reason you see the same post about being an outgoing introvert being posted and shared literally millions of times. It's because deep down, we're basically the same, even if our exterior bodies and beings and beliefs tend to differ.

This is so huge for people to be able to actually coexist with one another, and yet somehow, very hard for people to accept. You, as well as someone who thinks and feels in a way that is antithetic to you, can both be correct. Your truths can coexist. You can believe different things at different points of time, and because they applied to the situation in front of you, they were also both true. One truth does not cancel out another. It's context, and personhood, and experience, that validates it.

It's called a "shadow self." Basically, what you hate in other people is what you cannot see or accept within yourself. You may be thinking: well, I hate Donald Trump, and I don't necessarily see any part of him in myself. That's because it's not really a surface-level thing. You don't hate Trump because he's obnoxious and you fear you're secretly obnoxious. You may hate him because you think he's very inadequate, and deep down you fear that you are also inadequate. (That's just an example.) The point is, what you cannot accept in other people is some deep, subconscious strain of what you cannot accept in yourself. Understanding this not only brings you that much closer to coexisting with other humans in the world, but that much closer to being OK within yourself.

It's Not Differing Beliefs, But Differing Degrees Of Emotional Intensity That Typically Make People Not Get Along

People gravitate toward people who match them on a level of emotional intensity. We can be friends with someone whose beliefs are directly counter to ours, as long as they believe them to a similar degree that we do. It's people who are overly-emotional or under-enthused who tend to be "outcasted" — it's why we fear being too expressive, too big, too up in our #feels. Because we ostracize people who don't match us at emotional frequency, and because in our world our tolerance for genuine emotion is pretty low, we exist mostly in a subconscious suppression of it, basically all the time. Understanding this is crucial for accepting other people. When you see someone whose belief or emotion is outside of your personal capacity, you need to be able to say: I don't personally understand that, but I can also imagine feeling that strongly about something, as I do [this thing] in my own life.

If People Want Their World Views To Be Based On Objective Lies, There's Not Too Much You Can Do To Stop Them

There's a really great piece that was published recently, called: "No, That's Not Your Opinion, You're Just Wrong," and basically what it speaks to is how in this age of "that's just my opinion," we tend to ignore the fact that we sweep factual fallacies under the umbrella of sanctity, because you can't question or disagree or not accept someone's "personal beliefs." But there are no beliefs that aren't personal, and when people want to build their lives and their understandings on misguided or shortsighted ideas rather than objective facts, there's nothing more that you can do other than to kindly inform them of what they may be misunderstanding. You can't force someone to change their mind, but you can push them farther away from understanding by accusing them of stupidity, rather than trying to help them by offering a new idea.

Call it opposites attracting or whatever you want, but the happiest communities and couples and families and friendships are not between people who are so alike, there's nothing for them to disagree about. It's between people who are different and yet open-minded and accepting enough to be OK with who their friends and loved ones truly are, as they are confident and secure enough in their own feelings and understandings that someone else's opinion doesn't necessarily pose a threat. All of this to say: you don't need to be around people who are exactly like you to get along. You just need to be secure enough within yourself to accept them, even if you personally don't agree.

It's Not Your Place To "Police" For The Universe

It's not your job to judge and try to punish (even just by badmouthing and verbally down-talking) to people, because their beliefs are maybe not the most loving or informed. It's not your place to judge at all, because you don't know that given the same circumstances and experiences and emotional capacities, you wouldn't feel or think the same way. We're more alike than we think we are, after all.