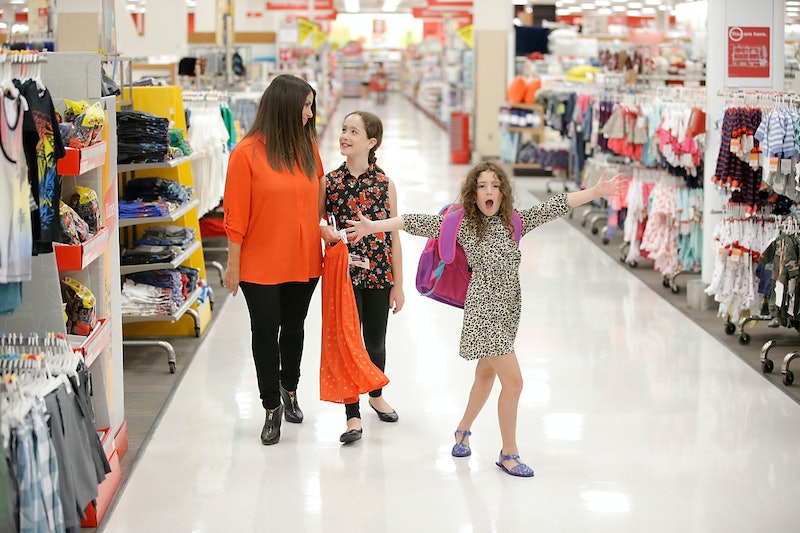 Making an exciting move in an important direction, Target announced it will be moving away from gender-based signs in an attempt to remove gender stereotypes based around children's toys. As of Friday, Target is now removing signs that might indicate that a certain section of the store is for boys or girls, as well as removing gender specific language or wallpaper in those sections. It's a huge and necessary step for the retail giant in showing the country that products such as toys, bedding, and decorations can be purchased and loved by any gender, and it's absolutely a change to be celebrated.

The change was announced on the Target corporation website, explaining that some gender-based signs will remain, while others, specifically in the kids' bedding and toy sections, are unnecessary and will be removed.

Over the past year, guests have raised important questions about a handful of signs in our stores that offer product suggestions based on gender. In some cases, like apparel, where there are fit and sizing differences, it makes sense. ... But we know that shopping preferences and needs change and, as guests have pointed out, in some departments like Toys, Home or Entertainment, suggesting products by gender is unnecessary. We heard you, and we agree.

With this move, Target now joins other large retailers like Amazon, who removed gender-based categories for children's toys. Since May, Amazon's toy section is simply broken down by the type of toy, and "boys" or "girls" labels have not been applied.

While removing signage and gender-based descriptions is the first step in creating a non-gendered toy market, there's still a long way to go. While Target shoppers might not feel constricted to buy toys or bed sets geared specifically toward their gender thanks to this new move, many toys themselves are inherently stereotyped. A study done by the National Association for the Education of Young Children showed that toys associated with or marketed toward boys are more violent and encourage competition and physical stimulation. Meanwhile, toys aimed toward girls focused more on physical appearance, being nurturing, or practicing domestic skills. But the study also found that the majority of toys that were presented as gender neutral were more likely to be educational, mentally stimulating, and artistic.

As many have pointed out, narrowly classifying children's interests and play based on their gender can be harmful. It reinforces gender stereotypes, and isolates children who might identify outside of "traditional" gender roles. It can lead boys who enjoy pink or girls who like trucks to feel frustrated or ashamed of themselves or their interests when they fall outside of "normal."

Removing stigmas from children's toys and products is a multi-step process. The first and crucial step, as Target has realized, is removing unnecessary classifications. But the next is providing an equality in toys, and removing the stereotype that girls will always want pink dolls as opposed to blue trucks. It requires providing equal opportunities for both genders and creating toys that stimulate education instead of tired gender roles.

Although not all toy makers are there quite yet, Target has shown great initiative in bringing us one step closer. Thrilled shoppers have taken to Twitter to celebrate the retailer for making this huge change, pointing out that the lack of labels will make it clear to children that their interests can — and should be — limitless.