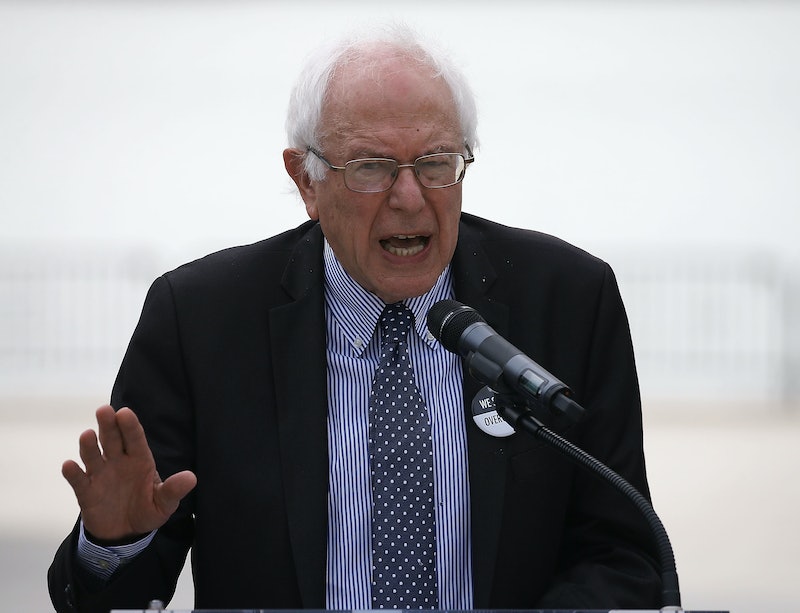 During a rally on Saturday, two Black Lives Matter protesters interrupted Bernie Sanders in an attempt to urge Sanders to speak out on racial issues. Sanders was slated to speak last at the event, which was held to support Medicare and Social Security. But within seconds of taking the podium, two women joined Sanders onstage, and took the microphone from him. Sanders eventually left the rally without speaking.

One of the women, who identified herself as Marissa Johnson, the founder of the Black Lives Matter chapter in Seattle, reportedly said, "We’re shutting this event down — now," before taking the microphone. After a brief discussion with event organizers, Johnson and her companion were allowed to speak, and Sanders stepped back and stood silently. Johnson then went on to call for four and a half minutes of silence for Michael Brown, who was shot and killed by police on August 9, 2014.

According to MSNBC, despite agitation and boos from the crowd, Johnson questioned Sanders on why he had not rolled out a comprehensive criminal justice reform package, like other democratic candidate Martin O'Malley. "Bernie says that he’s all about the people and about grassroots. The biggest grassroots movement in this country right now is Black Lives Matter," Johnson said, before calling for Sanders to be "[held] specifically accountable for his actions."

Although Johnson called for Sanders to join her at the microphone, organizers ended the event and Sanders left without speaking. Later that day he attended a rally hosted by his campaign, and brought in over 12,000 supporters, the largest number to attend any 2016 campaign event so far, according to The Washington Post. Although he did not address the earlier interruption, Sanders and the other speakers repeatedly discussed racial tension and inequality. "No president will fight harder to end the stain of racism in this country and reform our criminal justice system," Sanders said. "Period."

Saturday's event was not the first time that Sanders has encountered Black Lives Matter protestors. In July, both Sanders and O'Malley were asked questions about Black Lives Matter during a Netroots Nation rally. While neither candidate provided ideal answers, Sanders in particular responded with annoyance, reminding the protesters of his involvement in the civil rights movement and saying, "If you don’t want me to be here, that’s OK."

At a glance, it seems strange that protesters would specifically single out Sanders. Although he hasn't provided a policy plan on criminal justice reform, he has been one of the few candidates to discuss police brutality. Sanders and his campaign crew frequently discuss his involvement in Martin Luther King Jr.'s march on Washington, and that Sanders was arrested while protesting for equality. But it's because of Sanders' background and history of fighting that make him perfectly positioned to become a candidate who will be a champion for equality.

The negative reaction of the crowd solidified a point that the protesters were trying to drive home: The progressive movement that Sanders champions is not free from systemic racism. Challenging a candidate as progressive as Sanders to confront these issues could create a necessary dialogue that includes combating racism as a cornerstone of the upcoming election.

According to Sanders new press secretary, Symone D. Sanders, a member of the #BlackLivesMatter movement and national youth chair of the Coalition on Juvenile Justice, Sanders isn't looking to just rely on his past actions. "[It's]not just, ‘Oh, I fought for civil rights and I protested and I sat at the lunch counters,'" Symone Sanders said, according to BuzzFeed News. "That’s important and that’s great but that was 50 years ago and he has a lot more to stand on than just what he did 50 years ago."

Many on social media criticized the protesters, wondering if they were targeting the wrong candidate. On Saturday, Sanders released a statement discussing the interruption.

I am disappointed that two people disrupted a rally attended by thousands at which I was invited to speak about fighting to protect Social Security and Medicare. I was especially disappointed because on criminal justice reform and the need to fight racism there is no other candidate for president who will fight harder than me.

But the Sanders campaign isn't rushing to condemn the Black Lives Matter movement. "Do I think everyone in the movement agrees with the way the protesters commanded the stage today? No," Symone Sanders said after the event in Seattle. "Am I going to condemn the protesters for standing up and expressing themselves? No. Because their voices matter.”

And the pressure may have worked. According to Symone Sanders, the Sanders campaign will be releasing a criminal justice reform plan soon.