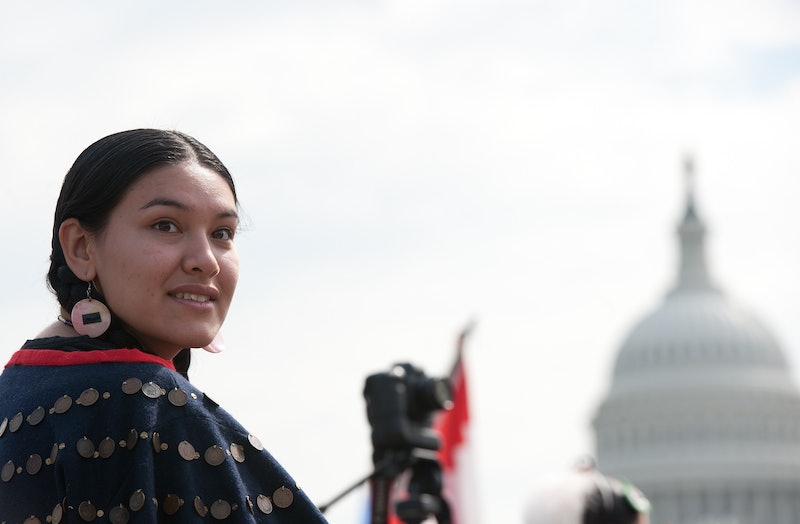 Against tough odds, Native American women are fighting for a better future for themselves and their tribes. One in four American Indians and Alaskan Natives live in poverty, according to the Pew Research Center, but American Indian/Alaska Native women are going to college, getting better paying jobs, and owning businesses at higher rates than ever before. Their increasing success is not only improving their lives, but also showing younger Native Americans that going to university and having a high-paying career is possible, as their example is already trickling down to the next generation.

The number of American Indian/Alaska Native women enrolled in colleges and universities nationwide increased nearly 200 percent between 1976 and 2006, from 37,600 to 111,000 women, and the number earning masters, doctoral, and professional degrees increased by 400 percent. Improved transportation to and from school, as well as more educational programs and mentorships offered to students early on, has helped make college more attainable for Native girls. Susan Masten, founder and co-president of Women Empowering Women for Indian Nations, tells Bustle: "Talking about Indian country and living on the reservation, there’s just so much they have to overcome just to get to school." Indian reservations are generally in very rural areas, far from local colleges and public transportation. For Masten's tribe, the Yurok in Klamath, California, having some small community colleges move closer to the reservations and the tribe offering cheap transportation to the schools has made it much easier for women to pursue a degree.

More access to childcare has also drastically affected American Indian/Alaska Native women's ability to work outside the home and go to school. According to Malia Villegas, the director of the National Congress of American Indians (NCAI) policy research center, Native women entering college tend to be older than the average 18-year-old college freshman and often already have families. In 1997 there were fewer than 20,000 Native children enrolled in federally funded Head Start early education programs across the country, compared to 44,000 today. When childcare isn't available on or near the reservation, women are forced to rely on family members to watch their kids or pay for outside childcare, so more Head Start programs makes it much less challenging.

Masten's family is the perfect example of how higher rates of American Indian/Alaska Native women earning college degrees is setting up tribes for future success. Neither Masten's mother nor father graduated from high school and she was the first in her family to go to college. She made sure all four of her siblings did the same and the five of them now have three masters degrees and own two businesses. Younger members of her family have already started following in their footsteps. "In one generation, we turned around our economic status for our entire family," Masten tells Bustle. "Now our children will have dreams and hopes of their own for higher education or entrepreneurship where that was lost for a period of time."

Because of the increase in higher education, American Indian/Alaska Native women are also working outside of the home and earning more. According to the NCAI, there were 16 percent more Native women in private sector jobs than Native men in 2011. However, like all women in America, they're affected by the pay gap, and only earn about 60 cents for every dollar white men earn. The number of businesses owned by Native American and Alaska Native women has more than doubled since 1997, and Native women now own 47 percent of Native American-owned companies.

American Indian/Alaska Native women aren't stopping there either — they're also taking on more tribal leadership roles. According to the NCAI, nearly 25 percent of federally recognized tribes are led by women, which is much higher than state leadership nationwide, with only 12 percent of the 50 states having female governors. "Women have always been the leaders, maybe it was just in their family because they had to run a household," says Melanie Benjamin, the chief executive of the Mille Lacs Band of Ojibwe in Minnesota. They're now becoming recognized, elected officials, which gives them more power to enact change for their whole community.

Robin Minthorn, an assistant professor in the University of New Mexico's Native American Studies department who's studied women's leadership, believes the rise in female leaders is directly related to the increase in higher education. She also believes that having more women in visible leadership positions is helping reshape how Native people view women's roles in their society. She tells Bustle: "Progress is being made in the communities as far as seeing women as leaders and people."

As for the future, these transformations can only mean positive things. More women having college degrees, higher paying jobs, and leadership roles will effect tribal relations, economies, and development, as well as create more opportunities for the generations to come. "Any aspect of life would then be impacted in a positive way because women are the backbone of the community and the backbone of their families," Benjamin says. "For a woman to be able to share that with others in the community is going to have a lasting positive impact."

More like this
'The Capture' Is Finally Back – & S2 Looks Tense AF
By Sophie McEvoy and El Hunt
The Lionesses Are Calling For Equal Access To Football In Schools
By Sophie McEvoy
What Is Megan Thee Stallion’s Net Worth? The Traumazine Hitmaker Isn’t Worried About A Budget
By Hugh McIntyre
Gemma Collins' Net Worth Is Only Going Up
By Catharina Cheung
Get Even More From Bustle — Sign Up For The Newsletter