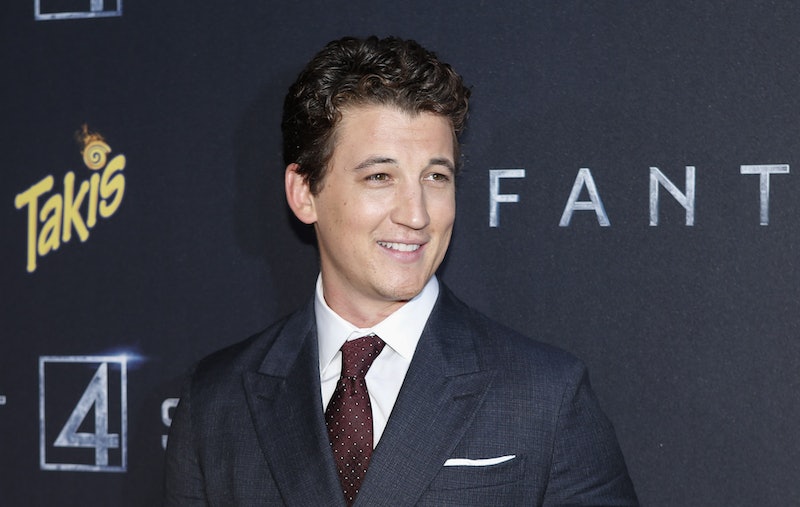 Miles Teller is a 28-year-old actor who turned heads in Whiplash, Rabbit Hole, and the Fantastic Four reboot. He dates a swimsuit model named Keleigh Sperry, doesn't seem to have much of a filter (but neither does Jennifer Lawrence and everyone loves her), and is willing to admit he has a pretty damn good life. Miles Teller was recently called a "dick" in an Esquire magazine article, but the harsh assessment of his character shouldn't influence your feelings about him — evidence from other interviews and his social media accounts prove there's more to him than could possibly come across in one meeting with a reporter.

Teller seems a little rough around the edges, which alone doesn't make someone a "dick" — if by "dick," one means to say, "an unpleasant person to be around." But the Esquire journalist who interviewed the actor in Atlanta was immediately turned off by the way he compared a highball glass to his "cock," and told the waitress the same thing — though, I should mention his comment followed one she says she made about the restaurant's champagne coupe being modeled after Marie Antoinette's left breast — either way, I get it, it's weird. Perhaps Teller was having a bad day. Maybe the reporter was having a bad day. Most likely, they got their signals crossed and didn't connect in a way that allowed readers to see Teller in a more positive light.

The actor defended himself after the interview was released by posting this elegant, straight-forward message on Twitter:

Based on Teller's social media accounts and other interviews with the rising star, he has come across as outspoken, honest, and perhaps someone with a dry sense of humor (give him a break, most of his childhood was spent in New Jersey), but never a jerk. Here are seven good reasons why he's actually pretty cool — and isn't a "dick."

Fact: if you're too caught up in your own mystical BS, you can not be funny.

2. He Love His Grandma

He gave his grandmother a sweet shout-out on Late Night with Jimmy Fallon by calling her his biggest fan and saying she's all over "the Twitter." He even set her up with a Spotify account.

He was able to poke fun at himself and the Esquire situation after the article came out by retweeting this fan.

4. He Laughs At Himself

He can be self-deprecating in a way that comes across as totally charming.

5. His Girlfriend Loves Him

I'm going to go out on a limb and say his girlfriend doesn't think he's a "dick" (although, can you dream up a more appropriate photo, considering the word of the day)?

6. He Works For His Success

In an interview with Rolling Stone, Teller revealed that he put himself through a grueling drum regimen to be able to convincingly play a music student in Whiplash. "I would have felt like such a douchebag if I was doing this movie and couldn't drum," he said. "When I first started bleeding on the drumstick, I felt validity."

7. He Doesn't Let His Scars Hold Him Back

Actresses aren't the only ones who get crap for their appearances. Teller told Rolling Stone he is realistic about how the many facial scars he got after being in a car accident as a teen affect his chances of being cast in more roles. "When I first started going to auditions," he said, "the feedback would be, 'He's a great actor, but it doesn't make sense for the character to have those scars.' Things had always had a way of working out for me, so when that happened, I remember having to do some soul-searching: 'Oh f*ck, is this actually going to be a thing? Is this going to inhibit me from doing this?' That was a low point." With five new films in the works, I don't think he's letting it be "a thing."

Moral of the story: whether you're a Teller fan or not, take interviews with a grain of salt. The most fabulous people in the world say a jerky thing now and again. It keeps them interesting.

More like this
Keke Palmer Shares The Sex Of Her & Darius Jackson's Baby
By Jake Viswanath
Austin Butler Confirms Vanessa Hudgens Pushed Him To Do 'Elvis'
By Alyssa Lapid
At 28, Rosie Perez Risked Her Career To Stop Playing Stereotypes
By Gabrielle Bondi
North West Will Make Her Acting Debut Alongside Mom Kim Kardashian
By Radhika Menon
Get Even More From Bustle — Sign Up For The Newsletter
From hair trends to relationship advice, our daily newsletter has everything you need to sound like a person who’s on TikTok, even if you aren’t.