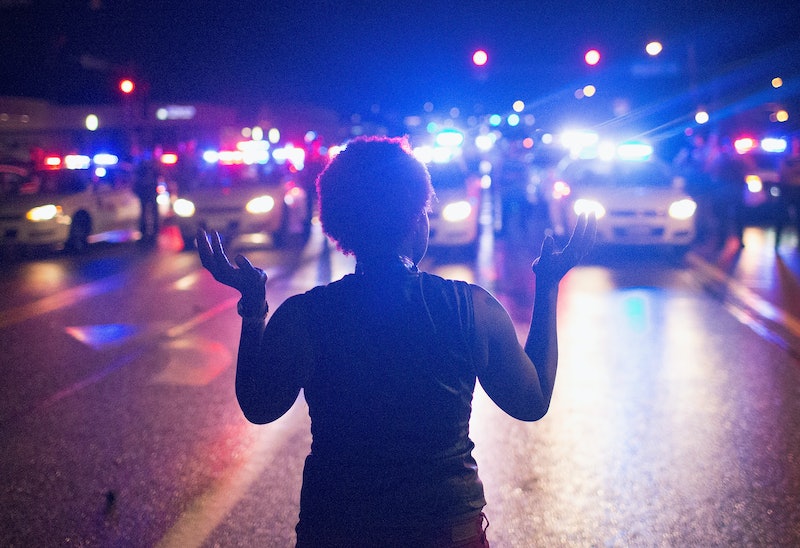 Dozens of protesters and civil rights activists demonstrating on the steps of the St. Louis Courthouse were taken away in handcuffs on Monday afternoon, causing the social media sphere to erupt in outrage. Among the #BlackLivesMatter activists arrested in Ferguson were a host of prolific names, including Dr. Cornel West and prominent leaders Deray McKesson and Johnetta Elzie. It was unclear at the time what violations those taken into custody had been charged with.

A short video posted to McKesson's Twitter timeline showed a uniformed officer announcing to the passionate crowd of demonstrators lined up along the front steps that they were "in violation of federal regulation," although he did not seem to elaborate further. Bustle has reached out to the U.S. Attorney's office in St. Louis for a statement on the matter, but those reached refused to comment.

According to the ACLU, while the First Amendment does allow protesters to gather in public spaces, Courts have previously ruled that there are a few restrictions to that process. In St. Louis, for example, police could have claimed that the protesters presented a "clear and present danger of riot [or] disorder" to back their arrests. Of course that's a slippery slope, but regardless, it's a possibility.

Here's the shortlist of those taken into custody by St. Louis City Police so far:

The activist and former school administrator, who has since moved to St. Louis from his residence in Minnesota and become a co-editor of the "This Is the Movement" newsletter, was documenting the demonstrations at the courthouse when he was taken into custody.

"Both @deray and @Nettaaaaaaaa have been arrested," tweeted Huffington Post reporter Ryan J. Reilly just after noon on Monday. Up until the time of his arrest, McKesson had been posting video footage of the numerous arrests to his own timeline.

The "This Is Movement" co-editor was arrested just prior to McKesson on Monday. In a final tweet on her timeline, Elzie wrote:

If I'm arrested today please know I'm not suicidal. I have plenty to live for. I did not resist, I'm just black.

The Union Theological Seminary professor, who has published 13 books and has taught at Yale, Harvard, and the University of Paris in the past, was one of the more recognizable figures arrested in Monday's demonstration.

"Cornel West just got arrested together with around 40 other activists," wrote one Twitter user. Novelist and editor Brooke Obie, along with several others, subsequently encouraged supporters to call and demand West and other activist's release, tweeting,

According to Post Dispatch reporter Joe Holleman, Rev. Sekou, an activist, author, and documentary filmmaker, had been peacefully lined along the steps of the St. Louis County Courthouse with various other clergymen and women, when he was arrested on unknown charges.

"I'm really curious to the excuse the cops will put out to explain/lie about their arrests," tweeted one supporter.

Lamkin, 44 and Caucasian, has become an unorthodox face of the #BlackLivesMatter movement since she was shot by police with a rubber bullet at a Ferguson protest last fall (the bullet left a deep purple gash, and Lamkin immediately became one of the high-profile names behind the protests).

Guardian reporter Jon Swaine tweeted Monday afternoon that Lamkin had been taken into custody with multiple other protesters at the Courthouse steps, and Los Angeles Times reporter Matt Pearce tweeted that Lamkin was one of nearly 60 arrested by St. Louis City Police.

On Monday, St. Louis County Executive Steve Stenger issued a statement declaring a state of emergency in Ferguson, and commending law enforcement throughout the state for their professionalism:

I commend the St. Louis County Police Department, the Missouri Highway Patrol, and other local agencies for their professional response as they work daily in the service of law, order, and peace.

Pursuant to my executive order, St. Louis County Police Chief Jon Belmar shall immediately take over the operation of police emergency management in the City of Ferguson and surrounding areas. Chief Belmar shall exercise all powers and duties necessary to preserve order, prevent crimes, and protect the life and property of our citizens.