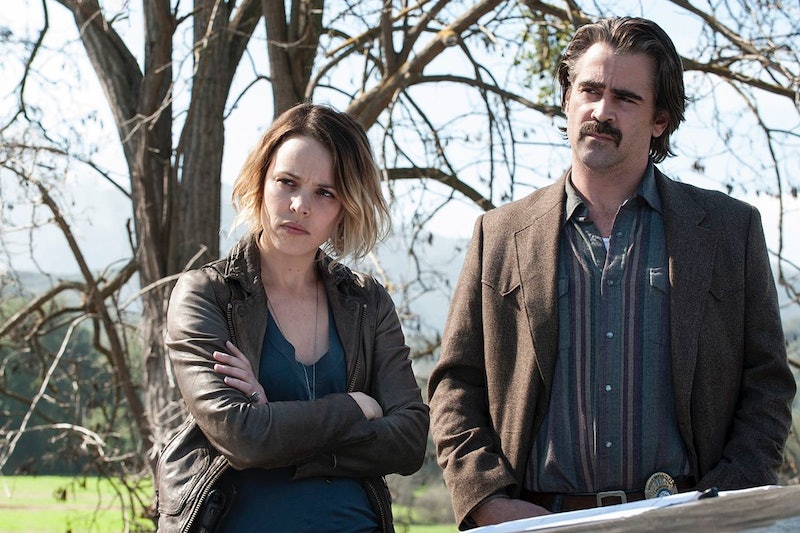 Fans of the mega-hit HBO series will probably be disappointed about this one. The ratings for the Season 2 finale of True Detective are in, and far less people tunes in this year than they did in 2014. Sunday's 90-minute-long send-off was watched by 2.73 million viewers, which did not live up to the first season finale of 3.52 million viewers. Season 1 of True Detective was a zeitgeist that, for the moment, seemed to change the way networks could make television. It was harrowing, mystical, and turned out two of the finest performances on the small screen. Season 2 had a lot to live up to, and the hype and anticipation building up to it might have worked against it in this case.

However, all is not completely lost for True Detective. The season finale did give the series a large boost in viewership from the previous episodes. Though there was a dip in overall ratings across all platforms (TV, streaming, etc) from last season, there was a small increase in the numbers of those who watched the series air on HBO. True Detective didn't lose its fan base.

Looking to the future, here's how True Detective Season 3 can learn from the mistakes of Season 2.

1. Pick One or Two Stories, Tops

The biggest issue most viewers had about this season was that it was too confusing. There were so many characters and subplots that keeping track of what the story was about was barely ever worth the effort. If you can manage to make a show like Game of Thrones understandable, you can do the same with a show that actually takes place in modern times.

2. Sprinkle In The Ornate Dialogue

I couldn't get over just how bad the dialogue was in this season. Every character talked in metaphors or pulpy one-liners that sound like they were ripped from a comic book. I didn't believe any of the characters because I didn't believe a single word they were saying. Colin Farrell's line from the premiere, where he beats the crap out of a bully's dad, is emblazoned in my mind forever, and not for the right reasons. In case you forgot, it goes a little something like, "I'll come back and butt-f*ck your father with your mom's headless corpse on this lawn." Matthew McConaughey got away with it in Season 1 because it actually went along with the myths of the story, and the ploy to make viewers believe he was the Yellow King.

3. Quit Being Terrible To Women

Sure, Rachel McAdams was in charge, but she was also sexualized and sexually tormented. Lest we forget the whole season was based around sex trafficking and prostitution. There's even a cabin in the woods dedicated to killing bad women who try to escape a crime ring. Oh! And Gena was raped and never knew if it was her busband's or her rapist who the father of her child. Season 1 also centered around the ritualistic murder of a prostitute. There are other ways to make a show's universe seedy and dark rather than abusing and killing women, ya know.

4. Give Us Characters To Care About, At Least From The Start

Everyone from True Detective Season 2 was overall a pretty terrible person, or at least did some terrible things in their past. It's hard to care about these people when the first episode doesn't really have you rooting for them. The show lost me with Ani in the premiere, because she was given the stale and overly-done stereoype of the cold hard b*tch. At least Season 1 took some time in rolling out just how low Marty Hart could be. I suppose Paul Woodrough was supposed to be the one we all loved, but even he feigned his sexuality and duped his poor girlfriend into following him.

5. Give Us A Crime To Care About, Too

I get that Caspere was connected to a lot of crime and other dubious affairs, but man, that guy was human garbage... from what I gather.

6. Diversity, For The Love Of Jebus

Soooooo the criminals in this season were minorities and the foreigners, while the "good guys" were all white people? Right, got it...

7. Stop Trying To Make A Formula From Season 1

The first season was lightning in a bottle, and it was clear that, structurally, Season 2 tried to mimic a few of the episode standards. But, True Detective is an anthology and you can't just slap on new stories and hope the same kind of structure will work. It was egregiously clear with Episode 4. In the first season, Episode 4 closed out with that insane six-minute long shot of the shootout in project housing. From what was a simmering series, the show boiled over into non-stop action and suspense. In Episode 4 of Season 2, the show ended with that massive shootout which ended in a lot of bloodshed and even fewer answers. As soon as I saw what was happening, I thought to myself, "I see what you're doing here..." In Season 1, Episode 6, Marty roughs up the boys who tried to have sex with his 15-year-old daughter, and Maggie has sex with Rust. In Season 2, Episode 6, Ani infiltrates the sex party. I rest my case.

True Detective Season 2 suffered because expectations were set far too high. Thankfully for Season 3, the bar has been lowered a little bit, and the writers no longer have to feel the pressure of having to do everything all at once. True Detective is successful when there are stories and characters we actually can care about. It's a simple idea that goes a long, long way.