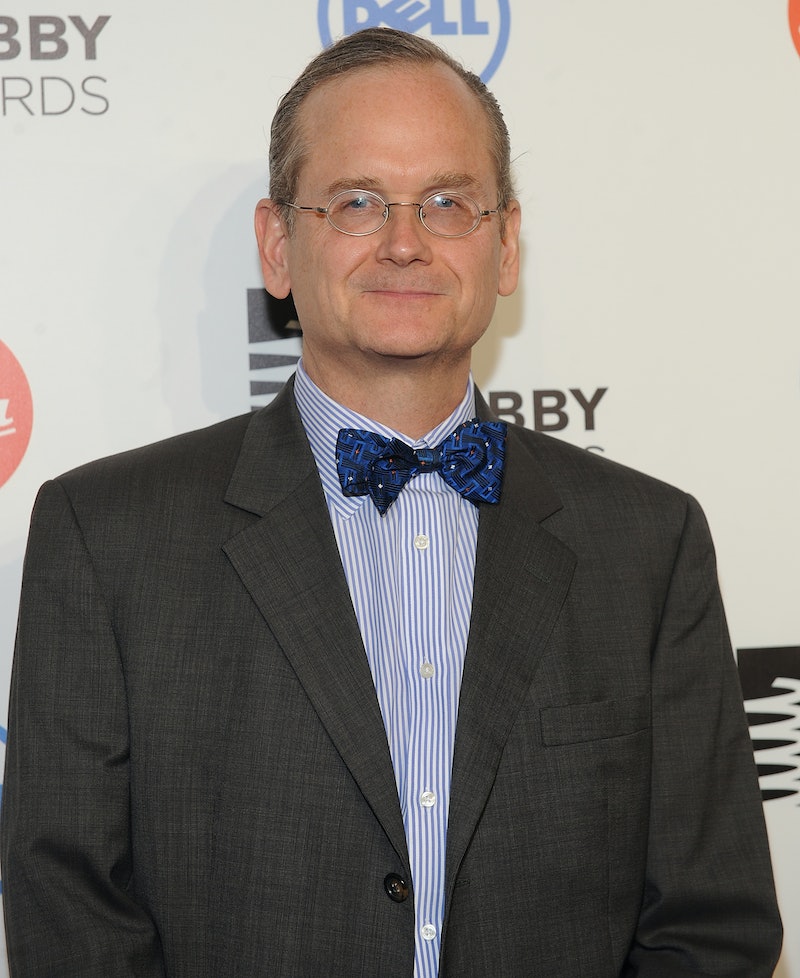 As you're probably aware, there's a bit of a size imbalance between the Republican and Democratic presidential fields right now. There are a staggering 17 candidates on the GOP side and an entirely manageable five for the Democrats. But now, there are rumblings that a new Democratic campaign could be on the horizon, though it'd be very different from any other candidacy on either side. Who is Lawrence Lessig, and will he run for president in 2016?

First things first, you're probably wondering why you haven't heard this name even once, throughout months of political analysis and 2016 forecasts. There's a good reason for that: Lessig, 54, is a Harvard Law professor and a public speaker, and he's well-known and highly regarded as an advocate for progressive reforms in government. But he's never been a politician, much less someone whose name you'd ever expect to hear floated for a presidential run.

But on Tuesday, Lessig made news by announcing he'd formed an exploratory committee to jump into the 2016 race. According to the Washington Post, he plans to make the call based on whether he can raise $1 million by Labor Day. And from the sounds of it, if he does end up joining the race, it's going to be quite unlike any presidential campaign we've ever seen.

Here's the basic idea: Lessig is considering a run as a so-called "referendum candidate," meaning he's vowing only to serve as president until he achieves a certain set of governmental reforms, chiefly regarding campaign finance. Then, he'd resign and turn over the reins to his vice president — in other words, a vote for Lawrence Lessig would really be a vote for his interim presidency, before his running mate would ascend to the top job. Here's how Lessig described his intentions to The Washington Post:

Until we find a way to fix the rigged system, none of the other things that people talk about doing are going to be possible ... We have this fantasy politics right now where people are talking about all the wonderful things they're going to do while we know these things can't happen inside the rigged system.

The obstacles to this kind of a candidacy are fairly obvious. On the one hand, regardless of Lessig's noble intentions in wanting to get money out of politics — which is one of the causes he's been most vocal about through the years — he's going to need some cash to even mount a run. At this point, he's planning to try to crowdfund the money online, and there's no telling how successful that will be. In the event that he can't raise the million he's aiming for, that would be a pretty big blow, especially considering that some video game Kickstarters can haul in that kind of money in days.

But if he does, and he ends up running, then he'd be doing so practically as a protest candidate — a way for voters to say "No, we won't support a traditional nominee. We want campaign finance reform before anything else." Of course, this would make Lessig's running mate hugely important, because that would be the person finishing the term. According to The Washington Post, Lessig floated Elizabeth Warren and Bernie Sanders as examples.

This all assumes that Lessig would even be able to pass the reforms he's so adamant about. To do so, he'd need to find a way to win the support of Congress. But that's one of the clear goals of the referendum candidacy — if enough Americans actually backed this wildly unconventional idea to land Lessig in the White House, his political capital would be unthinkably high. Here's how he described it in an essay for The Huffington Post on Tuesday morning:

A referendum president is a chance to achieve a mandate to restore this principle of political equality. It is a chance to create the political power that would be necessary to force a reluctant Congress to make the changes that equality demands. And if the movement to support this referendum grew powerful enough, as candidates for Congress get called upon to support the Citizen Equality Referendum, then conceivably, the term of the referendum president could be quite short. And once the reform is passed, the elected Vice President, whether Hillary, or Bernie, or Joe, or someone else, would become President -- with a chance to actually do something in a Washington that has been remade.

Whether Lessig's political capital would actually be great enough to force Congress to play ball with a non-politician who's already stated his intention to resign is an entirely open question. And obviously, it's far unlikelier at this stage than basically any other outcome. But it would be quite a strange, exciting addition to the race, no?