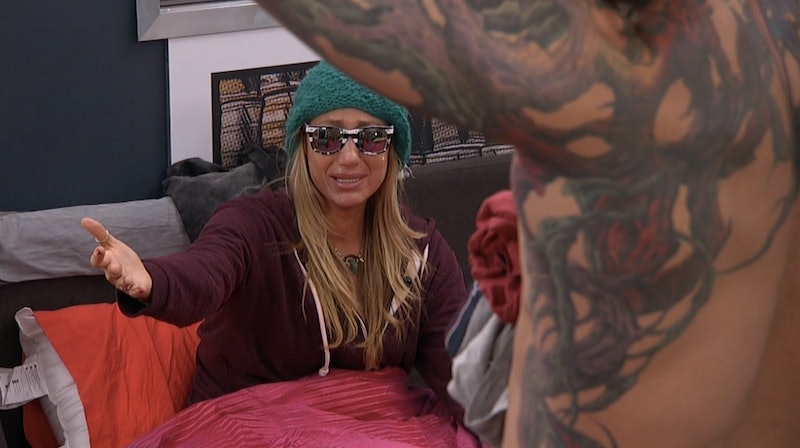 Vanessa has been a powerful player in the game since entering the Big Brother 17 house. With two times as HoH and a POV winner as well, her competition skills are solid, and she's had a hand in many of this season's evictions, all while maintaining to everyone in the house that what she says is always the truth. But, lately the houseguests have noticed that Vanessa is not always true to her word on Big Brother 17 . Somehow, Vanessa has also managed to align herself with nearly every houseguest this season and has Final 2 deals with at least two houseguests — Austin and Steve.

One of her strategies up to this point has been relying on her word and repeating, ad nauseam, some variation of, "You know I'm a woman of my word." Well, this is Big Brother and, generally, your word means very little in the house. I think that's why this strategy worked for her at first. By keeping her conversations private, feeding the houseguests information in the name of protecting them, and ensuring that she had nothing to gain by sharing this information, Vanessa had a lot to work with whenever it came time to make a deal. At that point, with trust established, she'd whip out the ol' "You know I'm good on my word." Deal done. All is well.

Unfortunately, the jig is up. Thanks to Becky — who's warning anybody willing to listen — Vanessa's word is now in question.

Suddenly, Vanessa's primary strategy in the game is falling apart. Lying is nothing new in the Big Brother house, but it looks like relying so much on her word and then going back on it might send Vanessa straight to the Jury House.

Here are three of the more recent times Vanessa hurt her game by breaking her word.

Remember that time Vanessa formed an eight-person alliance with Clay, Shelli, Jackie, James, Jason, Meg, and Becky? During Vanessa's second HoH, #DarkMoon formed for the sole purpose of getting Austin out of the house. When the plan was set in motion and Austin confronted Vanessa about it, she kept saying that she had to backdoor him or else the others would say she wasn't true to her word. Austin wisely replied that by backdooring him, she would be going against her word to him, which came first and is stronger because of their Final 2 deal. Yeah, he caught you with that one, Vanessa.

Once Vanessa patched things up with Austin, it meant that somebody else had to go up. Well, she chose none other than her new alliance member, Jason! That's right, just days after establishing a Final 8 deal with him, Vanessa put Jason on the block. As we all know, Jason was evicted that week thanks to Vanessa breaking her word, and this is what caused the other side of the house to snap out of their trance and go for blood two weeks in a row with James' and Becky's HoHs.

When James put Clay and Shelli on the block, eight of the houseguests came up with a plan for what they thought was a double eviction week: Evict Clay and Shelli back to back and then evict John. Despite agreeing to this and confirming with Becky over and over again this week that the plan was still on, Vanessa admitted to Julia that she had no intention of honoring it. Now Austin and the twins might use that as ammo to evict Vanessa. Oops.

For more on Vanessa's strategy, check out Bustle's Big Brother podcast, The Diary Room, for all your BB needs. You can subscribe on Bustle’s SoundCloud page and iTunes for the most updated episodes each week.