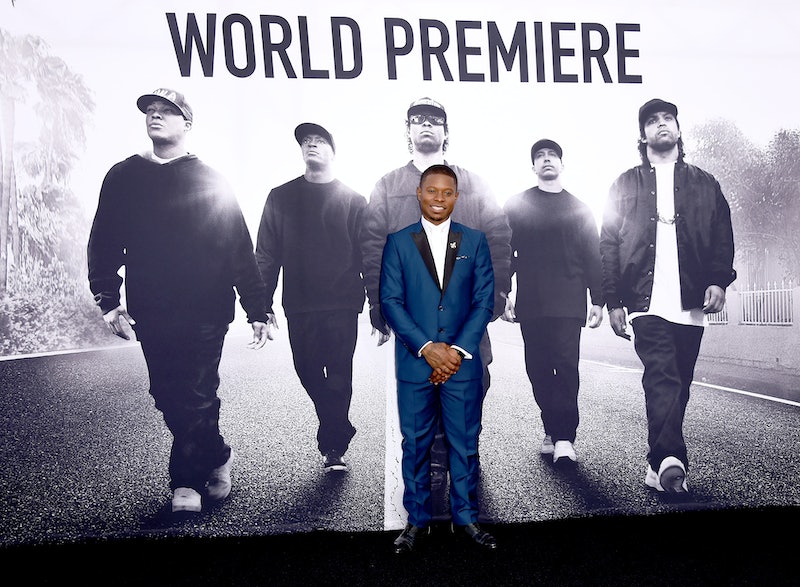 Straight Outta Compton arguably pioneered gangsta rap. At the very least, the 1988 N.W.A. album took the style, formerly a subset of rap, to the mainstream. The group's far-reaching influence can be heard in the later work of The Notorious B.I.G., Nas, and, to some extent, Wu-Tang Clan. Straight Outta Compton is also the title of this year's rap biopic depicting N.W.A.'s ascent to the cultural limelight. It would be such a disservice to see Straight Outta Compton without listening to Straight Outta Compton, so here are seven of the most essential N.W.A. songs to hear before viewing.

But before you listen, some background: Compton, the album, was named for the Los Angeles neighborhood where N.W.A united, uses rap as a tool to communicate the social ills like drug epidemics and gang wars in the community. Rightly or wrongly, Compton has come to be synonymous with gang violence and equally aggressive music, but it has also spawned some of the most revolutionary rappers of the past 30 years. (Kendrick Lamar is also famously from Compton, and his music at once acknowledges and criticizes the lifestyles it describes.)

As for the movie, it stars rapper O'Shea Jackson, Jr. as Ice Cube (his real-life dad), as well as Corey Hawkins as Dr. Dre, and Jason Mitchell as Eazy-E. The film has the resounding support of Ice Cube himself, who told Billboard, "I have never been this happy for any project that I've ever done." A big statement for the man behind the album itself. Though N.W.A. is a cultural touchstone for rap everywhere, the actual songs that have made them famous are perhaps not as recognizable as they once were. Here are a few of their Compton ones to know:

In "F*ck Tha Police," the members of N.W.A. play characters in a fictional trial between the group and the Los Angeles Police Department, with lines like "Police think they have the authority to kill a minority."

The title track for the album, "Straight Outta Compton" was the lead single — sparking the massive phenomenon that the group became.

Ice Cube's distinct style is on full display here, with a verse by Eazy-E towards the end (and a bit of Dre for good measure).

"100 Miles And Runnin'" was N.W.A's first single after Ice Cube departed to launch his solo career. It's a logical departure in style, where the group changes tack rather than trying to fill in for Ice Cube.

Dr. Dre performs nearly solo in "Express Yourself," and the track features a chorus sampled from the 1970s hit of the same name by Charles Wright and the Watts 103rd Street Rhythm Band (Eazy-E was also Wright's son, according to the Independent).

"Dopeman" narrativizes the interaction between a dealer and his customer, presenting both perspectives in one rap.

MC Ren, one of the N.W.A members who stuck with the group throughout all of its active years, wrote and raps "If It Ain't Ruff." MC Ren has been involved in the film's production along with Dr. Dre, DJ Yella, and Ice Cube, the sole surviving members of the group.

Straight Outta Compton was N.W.A's lyrical and musical peak, a brilliant creative streak and the fusion of some of the most iconic names in rap. It's only right that the film documenting their meteoric rise takes its name from the group's most-loved work. As MC Ren raps in "If It Ain't Ruff, "Groupies been waitin' for this / Suckers been hatin' for this / You know why? Because so many are relatin' to this." They knew who they were and what their music would do. The film will bring a bit more of the cultural context back to the name, but before watching, be sure to familiarize yourself with the songs that made N.W.A who they were in the ’80s and ’90s.